How to expel a Russian diplomat

Canada is removing four Russian diplomats in solidarity with the U.K. Here's how Ottawa expels them—and makes sure they actually leave. 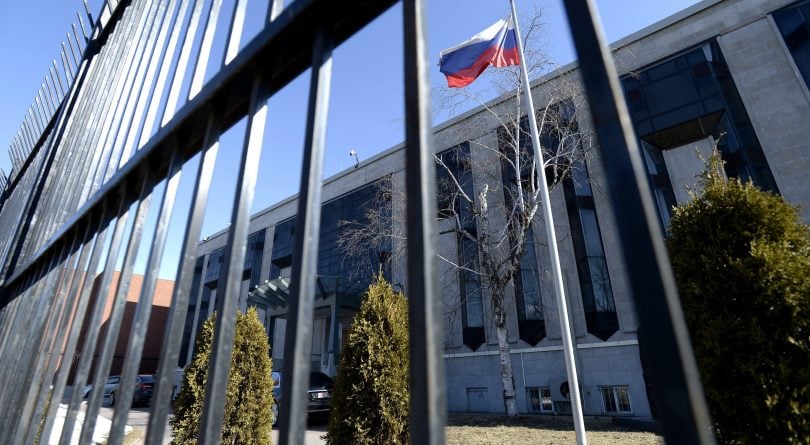 The flag flies outside the Russian embassy in Ottawa on Monday, March 26, 2018. (Photo: Justin Tang/CP)

Canada is showing the door to four Russian diplomats, one of a number of countries removing representatives of Vladimir Putin’s regime following an attack using a nerve agent in the U.K. that targeted a former Russian spy.

Such expulsions are a way to “express displeasure” with the government targeted says Gar Pardy, a former head of consular affairs and ambassador at Canada’s foreign affairs ministry.

The U.S. and several European nations are also showing the U.K. their fellow-feeling by removing Russian officials, with the tally of those declared persona non grata totalling over 100. The four being expelled by Canada come from the embassy in Ottawa and consulate in Montreal, and have been pegged as “intelligence officers or individuals who have used their diplomatic status to undermine Canada’s security or interfere in our democracy,” Minister of Global Affairs Chrystia Freeland said in a statement Monday morning.

Public safety minister Ralph Goodale declined to elaborate on the nature of those activities when asked by reporters later in the day. But Canadian security agencies will be “quite happy to get rid of any of the Russians that they’ve been tracking and [whom they] have a bit of a file on in terms of being up to no good,” Pardy says.

Diplomats are covered under conventions on consular and political relations agreed to in Vienna in the 1960s. Revoking the visas granted to foreign officials when they enter the country is the legal form that expulsion typically takes, but there are a set of norms that guide the actual process.

The process of expelling diplomats often begins with the country’s ambassador being summoned to the host nation’s foreign ministry to be told that members of their staff are no longer welcome. “It’s not general—the people are named that you want to get rid of,” says Pardy.

The to-be-removed are given a deadline to leave the country. When the outgoing Barack Obama administration kicked out 35 Russian diplomats in 2016 for election interference, they had 72 hours; Venezuela is even more impatient, putting just 48 hours on the clock when it expelled three U.S. representatives in 2014.

But the normal period is a week, says Pardy, although in extenuating circumstances—the need to ensure transfer of ongoing medical treatment, for example—an embassy may request and be granted an extension. The target of an expulsion is typically accompanied by any family who are with them, although a spouse may be allowed to remain behind for a short time to prevent a child having to be removed from school abruptly.

READ: How Canadian diplomats in Cuba are being acoustically attacked

Global Affairs won’t march the expelled Russians to the airport. But the department or one of the Canadian security agencies that have been watching these individuals will check “whether they went to the airport and got on a plane and left town,” Pardy says. They’ll likely fly commercial, though there’s no direct flight from Ottawa or Montreal to Moscow, so they’ll to have to stop off in a European hub along the way home.

There’s little chance of any of those ordered out overstaying, Pardy says. “By and large government work is on the basis, Let’s get this over and forget about it, and the act is done as quickly as possible,” he says. Global Affairs did not respond to questions about the typical timelines for expulsion, monitoring of individuals ordered expelled or consequences for failing to leave by deadline.

But the move will be returned in kind. Russia’s external affairs ministry called expulsions a “provocative gesture,” and last week it ordered 23 British diplomats to leave, matching the number of expulsions Theresa May’s government had announced at the time. Canada will probably be the target of similar retaliatory action.

Plenty of this kind of thing has gone on in the past. The U.S.S.R. kicked out a Canadian military attaché and five U.S. officers in 1968 because of what it considered to be unacceptable intelligence-gathering activities. The Canadian government responded by sending home a Soviet official. And just last year, Venezuela expelled a Canadian diplomat over criticism of its human rights record, which led Canada to act likewise.

Pardy says the scale and coordination of Monday’s expulsions make them relatively unusual. Diplomats are more often removed on an individual basis, and with less fanfare. “If the activity is non-political, [say] somebody is getting drunk and driving down our roads and we can’t prosecute them … then generally there’s not a lot of publicity,” he says. The host government may simply indicate to its counterpart that an individual should be recalled, without triggering a formal expulsion.

READ: These are the worst-behaved foreign diplomats in Canada

The intent here is clearly symbolic. Speaking to reporters, Goodale called it a “demonstration of our absolute solidarity” with the U.K. over the attacks. But in general, expulsions are “a paper exercise, to some extent, and generally they’re limited in time,” says Pardy.

The Russian government’s request for three further staff has also been denied according to Freeland’s statement, leaving the Russian diplomatic corps in Canada down as many as seven people. Check back in a few years, and it’s possible they’ll be back to full strength, even if the specific individuals being expelled won’t be returning.

But that depends on where the diplomatic relationship goes from here. As Pardy points out, Freeland has been on Moscow’s no-visa list for a while, and “she’s rather proud of that.”