How Trudeau's first national inquiry could become a quagmire

The inquiry into missing and murdered Indigenous women delivers big questions, even before it begins 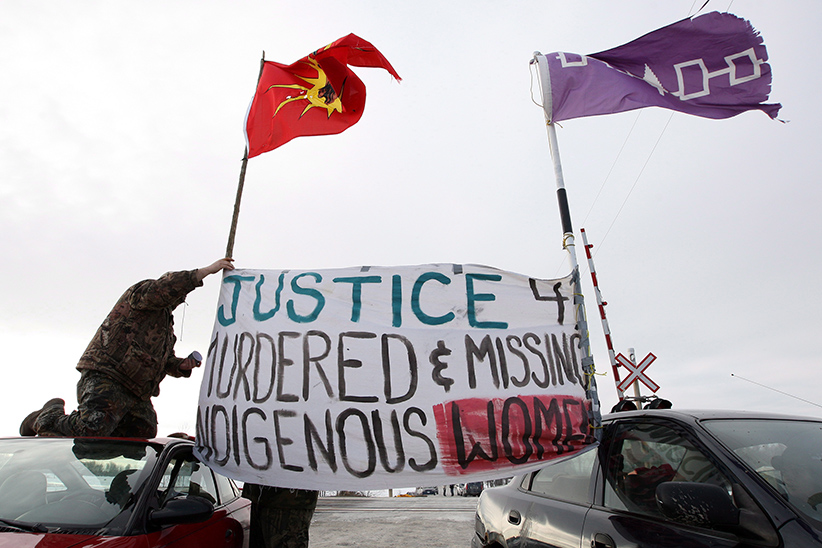 Indigenous protesters raise a banner during a blockade at VIA train tracks near Shannonville, Ont., on Wednesday March 19, 2014. The protesters want justice for murdered and missing Indigenous women. Lars Hagberg/CP

The federal government hasn’t yet announced the exact mandate of its promised inquiry into missing and murdered Indigenous women. What the Liberals want to avoid, though, is already clear: a repeat of British Columbia’s missing women commission of inquiry. When retired appeal court justice Wally Oppal released the B.C. commission’s five-volume report in a downtown Vancouver meeting room in late 2012, he was greeted by heckling from Indigenous protesters, bitterly dissatisfied with how he had conducted the two-year inquiry.

Indigenous Affairs Minister Carolyn Bennett and Justice Minister Jody Wilson-Raybould are now grappling with tough questions about how to make their inquiry different. They are expected to launch it by early summer. Last month, they consulted Oppal. “What I told Jody is, your biggest problem is going to be to keep everybody happy, because the expectations are so high,” he says. “Some people are going to want you to solve murders that happened in 1996, for instance.”

Indeed, sorting out how the inquiry will deal with claims of police indifference or incompetence going back decades is the biggest challenge facing Bennett and Wilson-Raybould. Dawn Lavell-Harvard, president of the Native Women’s Association of Canada, says the inquiry must be “very tough, very inquisitorial” on police conduct. “But that kind of inquiry,” she adds, “is very different from the kind of safe space you would want to set up for the families.”

Lavell-Harvard says police must answer hard questions about past cases, but the families of victims should be able to tell their stories without fear of intimidating cross-examination by lawyers representing those police. Oppal’s inquiry—into how police failed for years to recognize that mainly Indigenous women vanishing from Vancouver’s Downtown Eastside were being preyed on by serial killer Robert Pickton—allowed adversarial clashes between victims’ families and police lawyers. “We’ve had some conversations with some of the families who were part of the B.C. inquiry who say they were revictimized through the process,” Lavell-Harvard says.

But Brian Gover, a Toronto lawyer who has often acted as counsel for inquiries, says any police forces or individual officers whose conduct might be faulted by the inquiry will have to be given a chance to defend their reputations. That could lead to hearings packed with lawyers arguing at length over the details of cases stretching back many years. “If you have this very elaborate fact-finding process, you’ll end up with a lot of truth and not enough reconciliation,” Gover warns.

There are ways, though, to limit the amount of courtroom-style arguing over disputed facts. For instance, Gover proposes that the commissioners, who haven’t yet been appointed by the government, assign teams of fact-finders to look into allegations and report back to them. As well, he suggests the government consider limiting the inquiry’s mandate to issuing findings of misconduct against police forces, not individual officers, which would cut down on the amount of hearing time devoted to hammering out exactly what happened in particular cases.

Lavell-Harvard says she has heard the arguments for restricting the inquiry’s mandate when it comes to issuing findings of misconduct. She says that would be acceptable to her group only if the government pledges that after the inquiry completes its work, which is expected to take two years, another process would investigate specific complaints. “Things are going to come out, and if this initial inquiry isn’t going to be mandated to [pursue] individual cases where they find misconduct, there has to be a firm commitment to set up the forum, to set out the time frame, for those cases to be dealt with,” she says. “We can’t say we’re going to identify these cases and then just not deal with them.”

Even the number of deaths the inquiry must consider is far from settled. A 2014 report by the RCMP found that 1,017 Indigenous women had been murdered between 1980 and 2012, and another 164 were missing. But Bennett made news earlier this month by declaring, based on consultations with Indigenous groups, that the number is “way, way higher.” Status of Women Minister Patty Hajdu said an estimate of 4,000 missing or murdered women is credible, based on complaints from First Nations leaders about police often failing to investigate suspicious deaths in their communities, too quickly deeming Indigenous women to have committed suicide or died accidentally.

Oppal says he has no doubt that police have discriminated against First Nations, but Ottawa’s inquiry should dig deeper. “It’s all about poverty, homelessness, lack of education, alcoholism and drug addiction, violence against women,” he says. If the inquiry is to seriously tackle any of those issues, though, the government will have to find a way to keep it from being overwhelmed by the controversy over policing before it even begins.