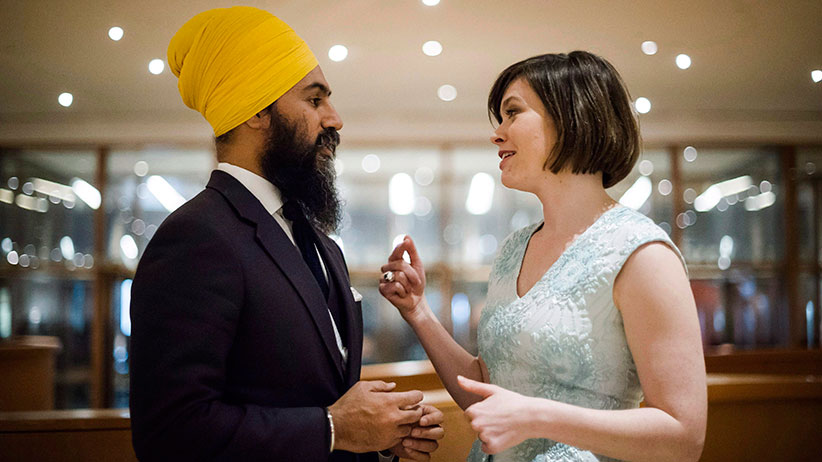 Federal NDP Leader Jagmeet Singh and Chief of Staff, Willy Blomme chat prior to having their portrait taken before the Broadbent Institute’s Progress Gala in Toronto on Thursday, Nov. 16, 2017. (Christopher Katsarov/CP)

She was meant to be called Anna, a name selected to be recognizable in French and English. Instead, while she was in the womb, her parents starting referring to their baby as baseball player Willie Mays. The nickname clung until kindergarten, when Anna decided she officially preferred her sobriquet and that her name would be Willy with a “Y.”

Blomme was brought on board by NDP leader Jagmeet Singh to be his chief of staff. She had written speeches for Jack Layton and brought Valerie Plante into the Montreal mayoral race before leading Singh’s campaign, but there was no certainty she would accept the job of chief of staff, as a 36-year-old academic with other career options.

She studied in the Ivy League, expanded the Broadbent Institute into Quebec and—based on her PhD thesis and a recently authored book—is professionally obsessed with winter. “Winters in Toronto weren’t cold enough for me,” says Blomme, who grew up in Toronto, lived in Montreal and moved to Ottawa in January for her new role.

Blomme wrote her PhD thesis at Johns Hopkins University and will publish a book (this winter) arguing that climate change threatens the Canadian sense of belonging—“outdoor skating rinks are under threat,” she says. No specific moment triggered her love for the season; rather, she was innately enthused by snowbanks. In winter, she marvels, “you hear your footsteps when you’re walking down the street, or you know in a fresh snowfall, you hear the hum of electricity lines.”

The hum of party lines now fills her ears in Ottawa. Critics worry Singh’s team is inexperienced, though Blomme is an exception to that. She notes some of Layton’s staff, including his photographer, have joined Singh’s team. “It’s sort of a marrying of those two worlds, and I’m kind of lucky that I know folks on both sides,” Blomme says.

READ MORE: Jagmeet Singh tries not to pick sides on the Alberta and B.C. pipeline fight

Blomme also knows both sides of French and English Canada. Although she was born to Anglophones in Winnipeg, she became bilingual in French schools in Toronto. On the campaign trail with Singh, she was the driver behind his Montreal rallies and his surprising visit to Alma, Que., a separatist region where Singh said he would respect Quebec’s decision to separate if Quebecers voted to do so.

Since Singh was travelling too much during the campaign to attend a regular French course, Blomme and certain friends of hers served as informal French tutors, speaking with him in person or on the phone each day in his third language (his second being Punjabi).

Among Blomme’s closest friends on the campaign was Dave Weatherall, Layton’s former photographer and now Singh’s deputy director of communications. Blomme spoke in French at his wedding.

When Blomme was in a political science class at McGill and played the role of the World Bank in a mock exercise, “she was just like a strategic mastermind,” says her friend Mohini Datta-Ray, who runs a women’s shelter in New York. Blomme stays behind the scenes even as social media talks about her. “Are you going to get Twitter now that you’re trending?” asked Datta-Ray, recalling that Blomme replied, “nope.”

When Blomme visits Datta-Ray’s home, she tends to show up with her favourite snack: two grapefruits and a bitter chocolate bar. “She can make friends with a rock, and make that rock feel like the most special rock in the world,” says Datta-Ray. Before she was offered the job of chief of staff, she had other career routes available to her but made a principled decision, her friend says. “It’s a once-in-a-moment, where the world is seemingly marching to the right everywhere else,” says Datta-Ray. “This is not just a crucial move for the NDP, but this is a critical move for the discourse of the country.”

Since infancy, Blomme has adored the cold. The April after she was born, she kicked off the blankets in her crib. “I even thought she looked slightly blueish,” says her mother, Sheila McCook.

Blomme started attending rallies, such as one against the Gulf War, with her parents, who worked for the CBC and her father later with Greenpeace. “She didn’t look quite like the other kids,” says McCook, who once spotted a group of children walking up the street in shorts, including one girl robed in sequins gifted from a family friend in the middle east. “It was Willy in an Afghan wedding dress.”

Junior high school was Blomme’s age of peculiar hats. Her grandparents briefly lived in Nigeria and sent her decorative hats, which Blomme thought she should wear, so she showed up in seventh grade with her head dressed in purple embroidery or a skunk-coloured toque with streamers of fabric dangling down her back. “So, about your hats,” said the teacher at the end of the year, as her mother recalls. “Is it for religious reasons, I guess?”

At age 19, Blomme ran unsuccessfully as an NDP candidate in 2000 (handing in a history paper on the day of the election), and took off a semester to work on Jack Layton’s leadership campaign. Later, she worked as one of his speechwriters in Ottawa, and Layton on the road would call her and download his thoughts and anecdotes to her as she typed notes and crafted a speech. Their best work together was the apology for the victims of residential schools. “I was really proud that he was the only one who used the word ‘racist’ to talk about the residential school system,” she says.

Layton’s son phoned Blomme the morning before he made his speech about love, hope and optimism. She was in Baltimore, and she returned to Toronto for the funeral, showing up unannounced at her parents’ house around 2am. During the dress rehearsal, the team tried to busy themselves. “It was oddly a bit like a campaign office,” she recalls. “You could cry through your work.”

Blomme’s own father died from cancer in 2016. While living in Amsterdam with her mother, he was on a work trip to Tokyo and lost feeling in his legs. He died in the hospital in Toronto. Blomme still wears his wool socks and sweaters.

Blomme later was the director of Valérie Plante’s campaign to become the leader of Projet Montréal. Plante became best known for her proposal for a new subway line, which the team originally called “the diagonal line” because it cut across the city. On the published graphic, the line appeared pink, and people started referring to it by its colour. “I would never brand the feminine candidate with pink,” says Blomme. However, “we decided to champion it.”

She returned to her role as Quebec director of the Broadbent Institute, a think tank that does research on the green economy, income inequality and democratic reform. She hesitated to leave that role, but she went onto become a close friend of Singh. After he launched his campaign in Toronto, he stayed at her apartment in Montreal, and she recalls sitting with him on a rocking bench on her balcony at 1am, with his brother in a Muskoka chair.

Singh has tried to become familiar by touring the provinces since October, and Blomme says his challenge will be “capitalizing on that while also having a strong presence in Ottawa.” Blomme has now moved into an apartment downtown near Elgin Street with a gym, pool and grocery store. It’s the first time she’s looked to live in a high rise. “The convenience of it makes sense for this life that I’m embarking on.”