Hugh Segal on the importance of Peter MacKay

With his roots in the hard-scrabble of ‎rural Nova Scotia politics, he was key in creating a Conservative party with Red Tory voices intact 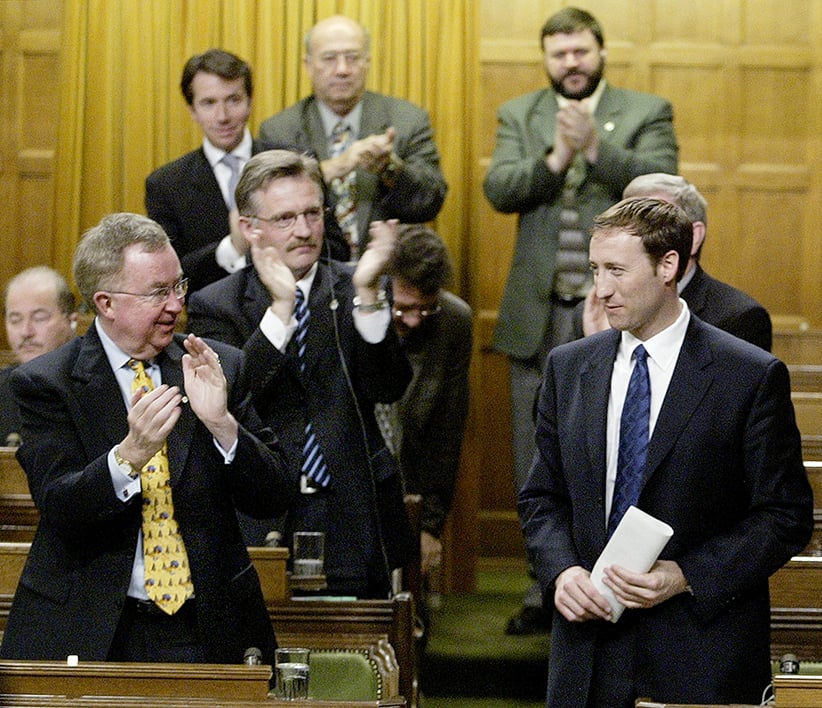 Peter MacKay and I would often rib each other. In 1998 he co-chaired my leadership campaign against Joe Clark; in 2003 I co-chaired his for what was then the Progressive Conservative Party of Canada‎. We both admitted that I had done a better job—at least that’s what his 65 per cent final ballot victory clearly implied.

The truth was and is that he was the perfect candidate, in terms of character, ability, charisma and intent. And while Red Tories like myself were pleased to support him, it was not because of some romantic belief in his philosophic adherence to Disraeli, R.B. Bennett, Bob Stanfield‎ or Bill Davis, regardless of the context or circumstance. Rather it was his competitive anti-Grit-establishment determination that evoked our loyalty.

Jean Chrétien had won a decade’s worth of elections just by showing up and watching the centre-right divide up the vote. One does not grow up in hard-scrabble ‎rural Nova Scotia politics without, as a Tory, viscerally understanding the ill winds assumed Liberal hegemony can bring—and these were his roots. Which is why he worked so hard to get the democratic representative caucus (DRC) of 12 alienated Canadian Alliance MPs to work with Clark’s Progressive Conservatives, whose ranks had swollen to 21 thanks t‎o Jean Charest’s superb 1997 campaign—and excess Liberal insensitivity to Employment Insurance exigencies in the Atlantic region. Sadly, Clark’s inability to reach out to the DRC did little to assuage their frustration with Stockwell Day.

It was important for the party that Peter MacKay win the PC leadership. He was the only sustainable and viable candidate. That he inherited a party with no money, dwindling membership and zero policy content only deepened his challenge. As for the alleged Orchard “arrangement” (in which rival candidate David Orchard threw his support behind MacKay on the condition there would be no merger with the Alliance) there was always less to it than met the eye. That Mr. Orchard has since run as a Liberal‎ sort of finishes that chapter.

Creating a new “Conservative Party of Canada” national institution may not have been on Peter MacKay’s initial agenda. But when, to his credit, Stephen Harper suggested negotiations to see what might be done, MacKay responded as a life-long Tory who had fought Liberal hegemony could: he gave his approval for the negotiations. Both sides were represented by estimable leadership figures—the Tories by Don Mazankowski, Bill Davis and Loyola Hearn, MP; the Alliance by Ray Speaker, Gerry St. Germain and Scott Reid, MP.

In the end, the decisions on a new party constitution and guiding principles having been reached (and both could have‎ come from the  PCs under Bill Davis), there was one sticking point—whether votes on policy or leadership would be by a simple party-wide majority (allowing one slightly evangelical riding in Calgary to outvote all of Atlantic Canada) or by riding delegates, eight per seat. MacKay hung in, and made it clear that with no delegates there would be no new party. Harper, to his credit, relented.

A new Conservative Party of Canada was born—with Red Tory voices and aspirations intact. That, plus MacKay’s decision not to contest the ensuing leadership of the new party‎, were his crowning achievements as a partisan leader.

His relationship with U.S. secretary of state Condoleezza Rice, his remarkable service to the Canadian Forces as a minister who went everywhere they did in the most difficult and threatening of circumstances, his convening of the Halifax Defence Forum (still an important stop on the annual‎ global defence analysis cycle), all speak to his breadth and engagement.

I remember an event in Afghanistan some years ago where the minister, the chief of the defence staff and I were touring bases in disclosed and undisclosed locations. Reaching a forward operating base in Kandahar province, the young Royal 22nd Regiment Commanding officer invited us up to a recon tower that surveyed the surrounding territory. About 2,000 yards outside the perimeter was a two-storey-high building with a Canadian armoured vehicle parked in the yard. The building‎ flew the Afghan flag.

“What is that building?” I asked.

“It was Taliban HQ for this region,” the young officer replied. “It dispensed the harshest most brutal form of Sharia law and terrorized the region.”

“What is it now?” I continued.

“A girl’s school,” was the response‎.

The minister and I exchanged knowing looks with each other.

— Hugh Segal is the master of Massey College in Toronto. He served nine years as a senator and was chief of staff to Prime Minister Brian Mulroney.