Gordon O'Connor sums up a tragic day in Ottawa 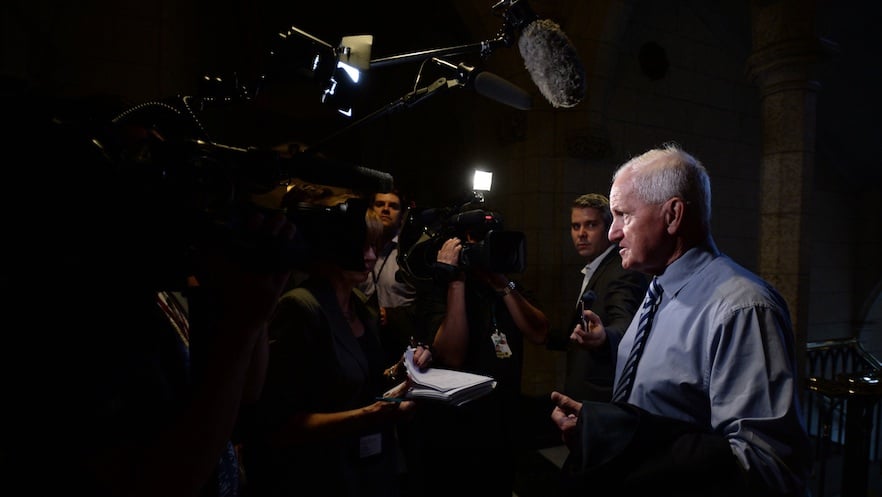 It was little after 8 p.m. on Wednesday evening when I recognized the slight, grey-haired figure walking briskly enough, south from Parliament Hill, after a shocking day of bloodshed there, toward a taxi stand near the corner O’Connor and Queen streets.

The blocks nearest the Hill were still mostly emptied of traffic by the police who were still tending their barriers at the intersections, but the day’s mood of sustained tension was giving way by that hour to a weary numbness.

As he came closer—looking drained after a day locked up with most of the rest of the Conservative caucus in Parliament’s Centre Block while police did their work—I remembered that O’Connor had once told me a nostalgic story about the very street where we were now chancing to meet.

As a five-year-old, on May 8, 1945, O’Connor had witnessed the Victory in Europe day celebrations here. “I can remember the streetcars going down Queen Street there, and throwing all the tickertapes and paper all over the place,” he reminisced to me in an interview a few years ago. “People were just delirious.”

And now we had experienced another day that will, I suppose, be remembered. O’Connor waved off a reporter’s questions about it. “I barely know anything,” he said. But then I pressed him for his thoughts, as a military man, about the soldier who was murdered that morning while standing on duty at the National War Memorial.

“What I understand, it was a corporal,” O’Connor said in the gruff officer’s voice that that some find harsh but I kind of enjoy. “Twenty-four years old, I heard it somewhere. It’s damn sad to have a person doing their duty out in the public and getting shot.”

Then he ducked into his cab, leaving “damn sad” hanging in the air—as good a phrase as I heard today for what had transpired. And hearing it from someone who has such a long memory of the Parliamentary precinct put it in some context. Has there been a sadder damn day around the Hill? Not in my 25 years covering the place, anyway.

There are serious, pragmatic questions about security that must now be asked, and serious, fraught ones about those who commit such acts of violence. But what will first sink in for those who love the Hill—and not just those who work there, but also the many thousands of Canadians who are proud to visit every year—is how this violence mars the intimate streetscape and architecture that is at the centre of our democracy.

The National War Memorial is the most moving monument of its sort I have ever seen. That won’t change. It will always stand for Canada’s sacrifices and struggles in distant conflicts. But now there will always also be the knowledge of senseless death in its very shadow. How can the place ever feel quite the same?

In the Centre Block of Parliament, the Hall of Honour—a corridor clad in cool Tyndal limestone, where slender, pointed arches draw the eyes of a visitor upward—is a space that makes you lower your voice. But now there will always be the memory of gunshots, so many of them, violating that still air, and of the shooter lying dead after near the doorway to the Library of Parliament.

It had by the time I met up with Gordon O’Connor. All that was left was that damn sad sense that this should not have happened, never in this peaceful place.