You know what this too-long campaign really needs? Some Coach's Corner colour commentary. 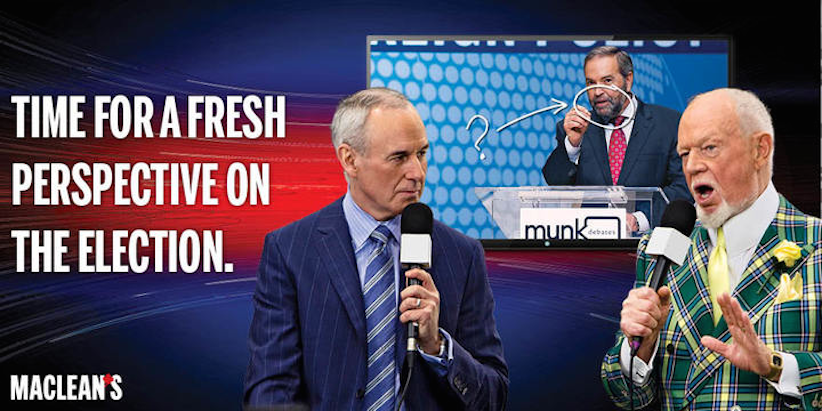 It’s been a long campaign. You’re bored with the leaders. You’re weary of your local candidates. Most of all, you’re sick of the commentators and pundits. Time for a fresh perspective on the election.

Don Cherry: So I’m down in the basement, having a pop and watching the Munk Debate on foreign policy, okay?

DC: Heh, right. So I’m watching the debate and I’m on the twit machine there, tweeter or whatever, tweedle dot something. And I’m on there—and everyone’s whining! “The debate’s too long,” they’re saying. Come on! Two hours—that’s not a debate! Diefenbaker and Pearson slugged it out for three straight days. No food, no water. Didn’t have their shirts on by the end. Old-time politics!

RM: Some say the leaders got a little too personal with their zingers.

DC: That’s what happens when you take fighting out of democracy! If Laurier had mouthed off like that back in the day, Charles Tupper would have punched him right in the teeth! DEBATE OVER.

RM: Stephen Harper—his party seems to be moving up in the polls.

More from Feschuk: What the politicians are really trying to say

DC: Good Western kid! Standing up against the pinkos and all them bike riders out there with their vegan helmets. Good job, Stevey boy! I’ll tell you what I didn’t like, though—that Ziploc thing he did with the safe.

DC: Tax lock. So, hang on, you’re gonna pass a law to stop yourself from raising taxes? When you weren’t never going to raise ’em in the first place? That doesn’t make sense! It’s like when people say I never finish one sentence before I start a new—Gump Worsley! WHAT A GUY!

DC: That’s what I said: McClain.

RM: You’re not happy with something he—

RM: What are we looking for?

DC: THE BEARD! On his face! You can’t have a beard and get elected prime minister. He looks like a guy who brings his own bags to the grocery store.

RM: What stands out for you at this point in the campaign?

DC: Well, I’ll tell ya: It reminds me of the time I’m out with Phil Esposito and we really get into it and everything. And everyone was having a good time and everything. And then Espo says to the guy, “That’s not my motorcycle.” And that’s why we need proportional representation!

DC: His dad—Pete or whatever. Pierre. Kept his elbows up. TOLD IT LIKE IT WAS. But the son—Jasmine. I see him on the TV and he doesn’t even know how to use an elevator!

DC: Escalade. He’s walking up the wrong one and he wants to have his ﬁnger on the button?

DC: But we have buttons, right? And he wants to put all his fingers RIGHT ON ’EM! All you kids out there—when you want to go up, go up the one that goes up. That’s the Canadian way!

RM: [Long sigh that reveals a lifetime of regret.]

DC: And look: I don’t go to Spain and places like that, but I don’t get why the Liberals keep running those ads about his hair. That one guy just keeps saying, “Nice hair, nice hair.” Kinda fruity, if you ask me.

RM: Those are attack ads paid for by the Conservatives.

DC: You know who had really nice hair?

DC: Thanks for ruining my story.

DC: Folks, my latest video is out: Rock ’Em Talk ’Em 23. You’re gonna get 75 minutes of the best political oratory we could find. Grab yourself a pop and take a gander at these beauty metaphors!

RM: Don Cherry, exercising his freedom of speeches, in the Coach’s Corner.