Paul Wells: Trudeau's behaviour around the 'Farmhouse' renovation fits a pattern: believing that you deserve only the information he deigns to give 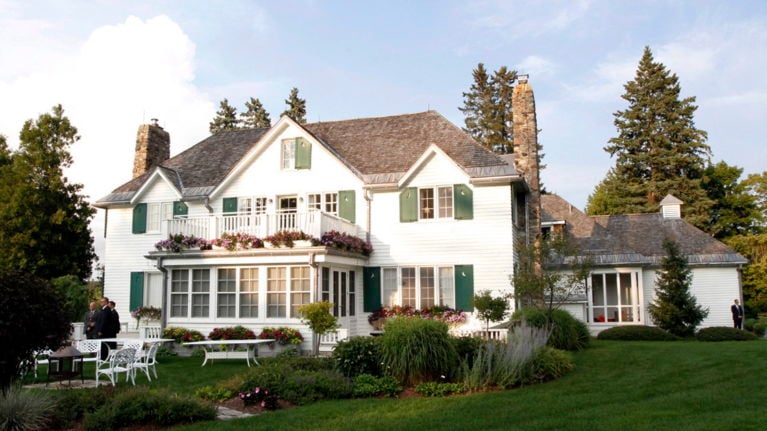 A few items from the news.

The third item is from the morning’s Globe. Seems the Prime Minister’s family is using a “Caretaker’s House,” renamed the “Farmhouse” and spiffed up to the tune of $2.5 million, as an interim residence at the PM’s Harrington Lake, Quebec country estate while the “main cottage,” its folksy name unspecified,  pauses from its $6.1 million reno because who’s working these days?

Jean Wolff, the dapper and amiable National Capital Commission spokesman who took the Globe’s questions, needed to make a few passes over the target of full disclosure before hitting it. “There are no new buildings being constructed,” he said. (The old building was dismantled, much of it discarded, and huge new parts put on, some distance from the old one. Is a new house new if it has an old door?) “No, it is not bigger.” (It’s so much bigger.)

Turns out the “Farmhouse,” at 450 square metres, is three-quarters larger than the old “Caretaker’s House” it incorporated, white blood-cell-like, as it lurched up the driveway to a better spot with a nicer view. I’m bad with spatial concepts, so I googled a bit and found that 450 square metres is a little shy of 5,000 square feet, which is a five-bedroom house, easy. In fact, the “Farmhouse” is fully one-fifth larger than the 2017 CHEO Dream Home, which raised big lottery bucks for the Children’s Hospital of Eastern Ontario and “features 10-foot ceilings on the main floor, a grand front entrance, curved open staircase, gourmet kitchen, and a luxurious master bedroom and ensuite bathroom.”

They make their farmhouses big at Harrington Lake.

Today the government’s defenders are telling us we knew all of this all along. It depends how well you like to know what you know. In April when CTV reported on more than $8 million in renos at Harrington Lake, the NCC told us it had told us all about this in 2018. Here’s a note from the NCC’s Wolff in 2018 that mentions a “Farmhouse Rehabilitation Project.” Neither in that note, nor in the report that it references, can I find any mention of a “Pick the Farmhouse Up, Put Bits of it Down Somewhere Else, and Expand it Radically so it Absolutely Crushes the 2017 CHEO Dream Home Project.”

The first mention of substantial new construction at Harrington Lake that I’ve found comes from a former occasional resident, Ben Harper, who’s picked up much of his father’s politics but whose tweeted remarks on the matter, from April 17, were pretty bland. Pierre Poilievre, the Conservative finance critic, followed on April 19 with a widely-remarked tweet that included a photo from Apple Maps and asked, “Did Justin Trudeau secretly build himself a brand new lakeside mansion at Harrington Lake with our money?”

Reaction to Poilievre’s tweet was largely critical and made two distinct types of argument. One camp asserted that the Conservative MP was delusional or fraudulent and that no substantial new construction could possibly be going on. Toronto Liberal MP Adam Vaughan was firmly in this camp, tweeting his own made-up photo of a Star Wars spaceship at Harrington Lake, but there were hundreds who made the same claim.

A second camp took issue with Poilievre’s choice of the term “build himself a brand new lakeside mansion.” Perish the thought that a prime minister benefits from his place of residence! Diefenbaker used to live there! Mulroney! Harper! So when a PM’s family spends the odd weekend in a truly large country house while the other even larger country house gets spiffed up, why, it’s a personal sacrifice for the lineage of Canadian political leadership, is what it is.

This morning’s Globe story confirms Poilievre’s claim in every particular, but fortunately for Justin Trudeau’s defenders, it also echoes his phrasing that the sprawling compound in question is at the “PM’s Harrington Lake retreat.” So today half the criticism—the half insisting you’d have to be a loon to imagine the government would ever do such a thing—has gone away. But the “stop calling it the PM’s retreat” argument is out in full force. “It’s not. His. Retreat,” one person wrote. Here’s Adam Vaughan again, saying that Harrington Lake “belongs as much to Fife as it does to Trudeau.” That would be Robert Fife, the Globe Ottawa bureau chief who pretty much brought down the Harper government with his reporting for CTV on Nigel Wright’s cheque to cover Senator Mike Duffy’s expenses, but who stubbornly refuses to be gentler on each government than on the last. Guess Vaughan’s previous it’s-a-Millennium-Falcon-har-har line didn’t wear well. And it’s good to be flexible.

It’s true that the next prime minister will be allowed to make use of the World’s Biggest Farmhouse just as Trudeau’s family was. But when I say it’s Trudeau’s retreat, his house, his really big temporary residence on his way to an even bigger temporary residence, I have two justifications for my language.

The first is that Justin Trudeau taught me how to talk about such things.

In 2018, facing opposition questions about earlier and much lower figures for the Harrington Lake renovations, Trudeau replied that one of Stephen Harper’s India trips was “so expensive” because “he wanted to bring his own limousines with him.” It wasn’t a slip; they were “Stephen Harper’s limos,” Trudeau said, and spending $1.5 million so Harper could “travel around in the style to which he was accustomed” was “completely unacceptable.”

The second justification is simple common sense. If the Harrington Lake compound belongs as much to Robert Fife as to Justin Trudeau, when can Fife move in? If it belongs to all of us, can I have it for June 6 and 7? Maybe throw in Harper’s limos to take me there.

The inevitable, certain next line of defence is that this is far from the biggest thing happening in the world right now. That’s true. At this writing, a quarter of a million people have died from the worst disease outbreak in a century. Before you accuse me of ignoring that, here’s 6,000 words I wrote about it. But by God I will not ignore this, because it fits a pattern.

This Prime Minister cannot for the life of him be straight with Canadians. He makes a show of speaking from the front step of a “cottage” while his family spends time at a “farmhouse” because he is, we are told, too frugal and focused on other things to get the main residence of prime ministers for 80 years fixed properly.

The paper trail that is, we are told, supposed to have made all of this perfectly clear was precisely as open and transparent and informative as Division 20 of Part 6 of the 385-page Budget Implementation Act, 2018, which is where we were told with a straight face to look for evidence that the government had always told us it was planning to cut a special deal for SNC-Lavalin in a case that was already before the courts when Trudeau changed the law.

Two ethics commissioners in a row have told Justin Trudeau to stop doing this. He won’t. If it’s everyone’s house and fixing it is an honour, then table architectural plans before the work begins, and take your licking then—not after you’re caught. Again. If it’s no more your retreat than Bob Fife’s then do what you should have done with 24 Sussex from the outset: authorize renovations, their nature and cost detailed in public  in the way any normal person would expect, and declare that only the next prime minister will reside in the refurbished building. (I’ve written about how skittish governments around the world have been about fixing official residences. I continue to believe 24 Sussex will rot until a prime minister does what I suggest here, and announce he’s fixing it only for the next occupant of the office.)

And this incorrigible Justin Trudeau habit of believing that you deserve only the information he deigns to give you is absolutely germane to this moment and the bigger story. Because this government—which is honestly doing its best in an unprecedented crisis that has every government scrambling—is, by the nature of the crisis, now presiding over the fastest peacetime expansion of the Canadian federal state since Confederation. At lightning speed. With unforeseeable effect. With stacks of rulebooks bent or ignored, with outside scrutiny badly hampered—that was the Access to Information bit I put up top‚—and many tens of billions of dollars sloshing about.

It will go badly. Somewhere amid the billions, it will certainly go badly, as sure as you breathe. Bad people will skim money, good people will spend it badly, ordinary people will have their economic incentives wildly distorted. That’s not an argument for not doing it. It’s certainly an argument for resisting the urge to hide in the fine print and the delay and the loathsome Adam Vaughan mockery of legitimate questions.

Justin Trudeau once made a show of demanding that his cabinet ministers be “transparent by default.” That’s not the same as being transparent when caught.

CORRECTION, May 11, 2020: An earlier version of this story misstated the number of people who have died from the coronavirus outbreak.