Ignatieff's "party of the network" 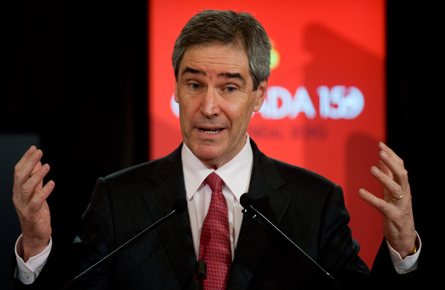 Michael Ignatieff’s wrap-up speech at his Liberal thinkers’ conference in Montreal aimed to push the listener out the door with two quite separate impressions in mind.

By announcing tax and fiscal policies, he tried to leave them with the notion that this Liberal leader is decisive. By wrapping up the whole affair in a bow called “network government,” he tried to convey a sense that the ideas floated over three days fit in one package.

Neither thrust was entirely convincing, but neither was a complete dud.

His announcement that Liberals would freeze corporate tax rates, rather than pressing ahead with further cuts scheduled by the Conservatives, is sensible if not spectacular. He argues that Ottawa can’t afford the cuts as it grapples with a huge deficit, and anyhow the federal tax rate for companies is already easily competitive with U.S. rates.

The related promise to hold the deficit to one per cent of GDP, around $15 billion, within two years of a Liberal government winning power is a modest goal and basically in line with what’s expected to happen if a government of any partisan stripe behaves responsibly.

Fixing on “network” as the weekend’s word to conjure with is more risky. As my colleague Andrew Potter mentioned when we were chatting after the speech, the notion of a “network society” was hot in the 1990s. Now, Ignatieff might well mean something newer and freshly relevant—network is, after all, one of those encompassing, concatenating words—but I couldn’t make out exactly what he had in mind.

For instance, he mentioned that Canada needs an overarching energy and environment strategy, one that would somehow involve investing in clean-tech, renewable energy and also relate to Canada’s status as the biggest energy exporter to the U.S.

“We’ve got to understand, and I think we understand in this room, and we can see it on the website that so many Canadians understand it, that the crucial investment we must make is in clean-tech, renewable energies and energy efficiency,” he said.

“Again it’s a place where we have to have a national strategy, in which we bring the partners together, we create the right fiscal incentives, the right allocation of responsibilities. We talked all weekend about networks. Here’s where we need a network of responsibility.”

Sounds interesting, I guess. I can’t quite envision this network, though. I can imagine, say, federal tax breaks or direct subsidies for the some greenish energy companies. I can imagine more stringent building codes when it comes to heating and cooling. I’ll be interested to see in the coming months if Liberals come up with an approach that can be called a network to stitch various workable energy and environment policies together.

I suspect excited Liberals will dismiss this as caviling. The notion of the network is expansive enough that it feels like a chance to breathe after the four years of the niche policy-making that’s Stephen Harper’s specialty. Ignatieff appeals to the hankering for a grander vision, but he’s also alert to the possibility that it might all sound silly.

“This network conception of how we govern ourselves,” he cautioned, “we need to think through. This is not an abstraction. We can feel this is how we live and actually work.”

In part, the network metaphor is appealing because it offers the prospect of thinking sweeping thoughts without necessarily financing costly programs. If the federal government under Ignatieff would be creating networks with the provinces, NGOs, companies, even other countries’ government, then it wouldn’t presumably being paying the full fare for whatever those networks actually do.

“We are not a Big Government party,” he said. “We are the party of the network, and that’s what we need to understand.”

And as soon as they figure it out, one might add, they need to explain it.

Answering questions from reporters after the conference, Ignatieff was pressed to explain his thinking on the looming problems related to the aging of Canadian society. He insisted that this isn’t cause for a gloomy outlook. Still, he allowed that as the baby boomers retire, the tax base will shrink, health costs will rise, and more middle class families will stagger (my verb, not his) under the double burden of raising kids and supporting older parents in declining health.

He spoke of Liberal interest in “strategic investment in health care,” largely  preventative care, as well as home care to keep the elderly out of expensive nursing homes and hospital beds for as long as possible. He also alluded to investing in “health care innovation” and the need for provinces to share health information.

No doubt coping with the problems of health and an aging populace will fall to networks—governments, families, even charities in some cases, company benefit packages. But can the Liberal approach to government rest primarily on thinking about Ottawa’s place in such networks?

That’s the problem that Ignatieff  sent his reinvigorated party policy wonks home to ponder after their Montreal weekend.