Stephen Harper’s go-it-alone approach to Senate reform was doomed from the start. And now he's free to focus on his real interests. 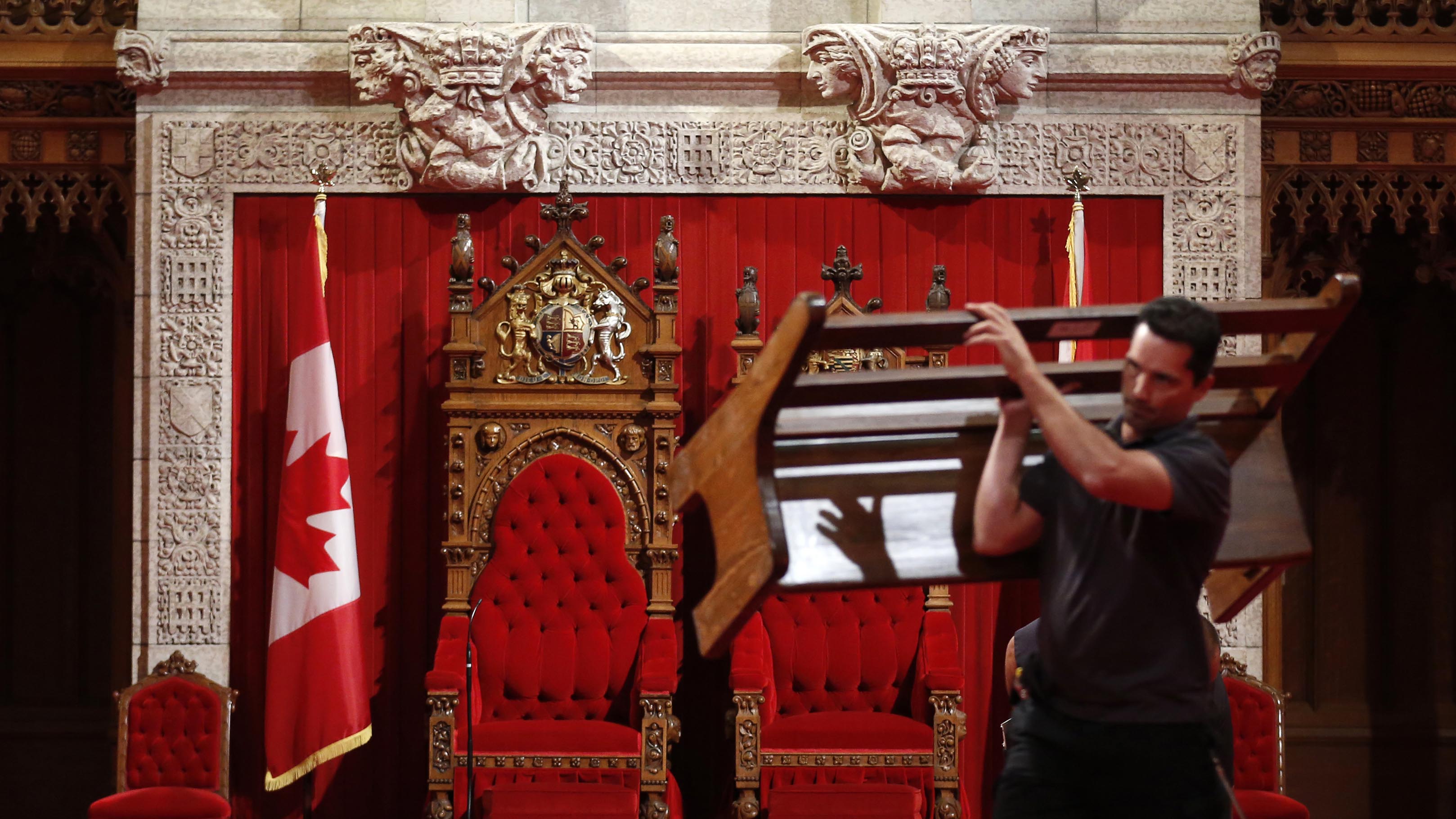 When the Supreme Court of Canada hands down a decision of the sort that’s instantly labelled “landmark,” the traditional politician’s response is to plead for time to absorb the implications. Not so with the judges’ unanimous conclusion that Stephen Harper’s plan to reform the Senate is out of bounds—unless the Prime Minister cares to negotiate with the provinces to amend the Constitution, which he emphatically does not. “There is no consensus among the provinces on reform, no consensus on abolition, and no desire of anyone to reopen the Constitution,” Harper declared at a local chamber of commerce event last week in Kitchener, Ont., his first opportunity to comment.

And so the door closed on his long-standing pledge to create an elected upper chamber filled with senators serving limited terms. If Harper sounded more than ready for the court’s rebuke, why wouldn’t he have been? Most legal experts had predicted his push for unilateral reform wouldn’t pass constitutional muster. It’s possible his go-it-alone approach was really designed, not so much to survive the court’s scrutiny, as to satisfy his Conservative base, a key segment of which, especially in the West, retains a fond attachment to the old Reform dream of an elected Senate. Harper can now tell them he tried—and briskly turn his attention elsewhere, likely to economic issues on which his strategists boast of a brand advantage over the Liberals and NDP.

This spring is shaping up as a turning point in more ways than just the closing of another chapter in Canada’s long history of doomed bids to overhaul the Senate. Two other key developments might signal the end of a period when Harper’s political methods were often displayed in an unflattering light. In 2013, federal politics was dominated by spending scandals involving senators he appointed, punctuated by the astounding revelation that his chief of staff, Nigel Wright, had personally cut a cheque for $90,000 to pay back dubious expenses claimed by Mike Duffy, who was later suspended from the Senate. Earlier this month, the RCMP announced, after an investigation, that criminal charges will not be laid against Wright, who lost his job as Harper’s top aide over the episode.

Equally good news for Harper was Elections Canada’s recent announcement that its investigation into the so-called “robocalls” affair had uncovered no links between the Conservative party and misleading calls made to voters during the 2011 federal election, other than in Guelph, Ont., where a lone Tory campaign worker has been charged. Pollster Nik Nanos says the sudden easing of pressure on Harper over the way his office operates, and his party campaigns, is likely to yield benefits first among disillusioned Conservatives. “The end of robocalls and the Nigel Wright thing basically removes irritants for former core supporters who wondered if it was true,” Nanos says. “The Conservatives have new talking points: All that stuff we told you last year was noise? Well, it was noise. Get ready to come back.”

With Senate reform on ice and those two troubling investigations closed, only the government’s so-called Fair Elections Act is left as a potential big source of controversy concerning Harper’s relationship with the institutions and apparatus of Canadian democracy. His government seems determined to put that issue to rest, too. Pierre Poilievre, Harper’s combative democratic reform minister, agreed last week to a raft of amendments to the act, including compromise on his signature move to end the practice of allowing a voter without proper identification to be vouched for by another voter. Among other concessions, after months of sustained attacks by opposition parties and independent experts, Poilievre said a voter who arrives at a polling station without ID that verifies her address could have another voter swear an oath to confirm where she lives.

All this clearing away of controversy comes after a few weeks of surprisingly upbeat poll numbers for Harper. A mid-April survey by Ipsos Reid, for instance, showed the Conservatives in a tie at 33 per cent with the Liberals, who had been enjoying a long run alone at the top of the polls since Justin Trudeau’s election as the party’s leader in 2012. (The NDP lagged at 24 per cent in that latest Ipsos Reid poll.) Nanos says his firm’s tracking shows Harper has benefited measurably by adopting a stern, anti-Russian line on the crisis in Ukraine. “It’s unusual for foreign-policy issues to have a significant impact on the numbers, but it’s because the Ukraine crisis has been in the news basically every day, and the Conservatives have a clear policy, and the opposition cannot differentiate themselves from it,” Nanos said. “It’s allowed Stephen Harper to present himself in a different frame from the Senate, from controversies over elections.”

Still, nobody expects foreign policy to continue to shape voter opinion through the long run-up to the date, Oct. 19, 2015, fixed for the next federal election. Instead, as controversy over the Senate and elections fades, strategists in all partisan camps are watching for economic questions to fill the gap. It’s possible the frame for that debate will be the overarching issue of the state of the Canadian middle class and its prospects of prosperity. Trudeau has tried to position himself as the champion of anyone making roughly the median income. In a major speech on Feb. 22 at a Liberal policy conference in Montreal, he argued that ordinary families haven’t benefited from the main economic policy thrusts of recent decades, including free trade and fiscal discipline. “The original promise of that agenda was that everyone would share in the prosperity that it creates,” he said. “That hasn’t happened.”

Yet, some influential Canadian economists contend it has, notably, Université Laval professor Stephen Gordon, who charts how Canadians in the middle have enjoyed solid income growth since the late 1990s. That perspective was echoed in an international context when the New York Times reported last week that Canada’s middle class has surpassed America’s as the most affluent, based on figures from the Luxembourg Income Study Database, which also puts Canada’s middle-income earners ahead of those in countries such as Britain and Sweden. The Conservatives wasted no time taking credit for that ranking in a new fundraising pitch. But Trudeau’s Liberals have staked far too much on the thesis that overall economic growth has left regular folks behind to abandon the position based on one set of global comparisons.

Among the economists the Liberals turn to for analysis is University of British Columbia’s Kevin Milligan (who is, like Laval’s Gordon, a Maclean’s blogger). Milligan argues that troubling details lie just beneath those ﬁgures showing strong income growth overall for Canada’s middle class. “There are two things that are driving that growth for the median income: One is increasing earnings by females, and the other is the oil boom,” he says. Strip away rising pay in oil-rich Newfoundland, Saskatchewan and Alberta, and the impact of the historic entrance of far more women into the workforce at increasingly good salaries, and the picture is more troubling. It’s not that those factors don’t contribute real wealth, Milligan says, it’s that they aren’t a formula for broadly sharing future success in much of the country. “We should have some discussion about growth that doesn’t revolve around, ‘Well, oil prices are great,’ ” he says.

There can be no question that Harper’s preoccupation with energy wealth is a defining theme for his government. Beyond that sectoral and regional focus, his message is largely about tax cuts. Finance Minister Joe Oliver, in his first big speech after succeeding Jim Flaherty as Harper’s top economic standard-bearer, said that as soon as the federal budget is balanced, which is forecast to happen next year, “our priority will be to provide tax relief for hard-working Canadian families.” But even some Tory strategists see the need for fresh and appealing economic ideas, in particular for Ontario, where the manufacturing economy continues to face serious challenges, and many ridings will be hotly contested in the next election.

Tim Powers, a Conservative commentator and vice-chairman of the consulting firm Summa Strategies, sees the Harper government as poised right now to reconnect with voters on economic issues, after a long period of the opposition parties “tying themselves in knots over democratic processes, which are important, but just don’t engage in a sustaining way with the public.” The challenge for Harper and Oliver, he suggests, is to add something to the tax-cuts mantra. “Beyond measures for the individual,” Powers asks, “how are you going to look at broad sectors of the economy? Can you look at broad sectors of the economy?” He predicts that the debate over injecting new vigour into Ontario’s economy could be played out in the provincial election widely expected later this year.

If Conservative economic policy needs to be renewed, so do the platforms of Trudeau’s Liberals and Thomas Mulcair’s NDP. Neither has so far risked revealing many detailed proposals so far in advance of the 2015 election. In a hard-hitting recent speech, though, Mulcair served notice he’s not going to cede ground to Trudeau, the well-off son of a prime minister, when it comes to empathizing with ordinary Canadians. “The problem is, Justin Trudeau will never know what middle class means,” he said. “He just doesn’t understand the real challenges that families are facing.”

Beyond that personal attack, Mulcair recently named B.C. MP Nathan Cullen as his finance critic. Cullen says the NDP is now drafting economic policy centred on the worries of hard-pressed families, the turf on which the Conservatives also seem to want to fight. “I don’t know if they will be successful in pivoting,” he says. “The culture that created the Mike Duffy-Nigel Wright affair and the ‘unfair elections act’ still exists.” No doubt the odour of those controversies will linger in the Parliament Hill air. But fresh breezes are blowing.