Imagining a federal election without Alberta or Quebec

Philippe J. Fournier: A 338Canada projection shows what would happen if either province separated. There’s a key lesson here for the Liberals. 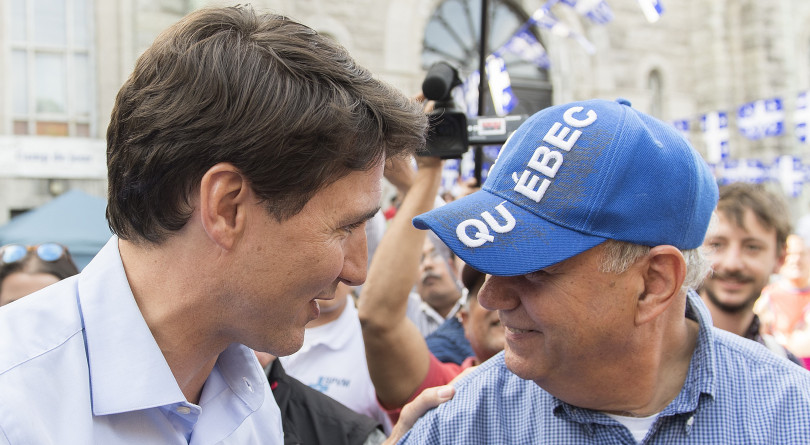 The Ottawa-based firm Abacus Data released earlier this week a very interesting part of its latest round of polling, titled: “Has Canada Been Worth It? Views On Leaving The Federation“. We learn that Canadian Unity is, mostly, in decent shape considering that the country was on the brink a mere 25 years ago.

To the question: “Is being part of Canada good or bad for your province?” Abacus’ numbers indicate that 84 per cent of Canadians answer in the affirmative. Respondents from Ontario, British Columbia and the Atlantic Provinces were the most enthusiastic with 90 per cent or more believing Canada has benefited their respective province.

Alberta, Saskatchewan (71 per cent each) and Quebec (76 per cent) were the provinces where satisfaction with the confederation was the lowest—although still a sizable majority remain in optimistic.

Abacus’ newest numbers show that this trend has not (yet) reversed its course: 28 per cent of Quebec respondents say that the province should separate from Canada, and 72 per cent say it should remain. These numbers are consistent with recent polling on the matter and the current voting intentions in Quebec.

Western alienation is not a new phenomenon, but it appeared to have gained some ground in recent years. Anecdotally, I noticed a growing number of Albertans who took their anger out on their keyboards during their recent provincial election, which was easily won by Jason Kenney’s United Conservative Party.

Although the Alberta Independence Party received only 13,500 out of 1.9 million votes in the election (0.7 per cent), it “felt” as if Alberta separatists were more numerous. Abacus Data finds that no less than 25 per cent of Albertans would vote to secede from Canada—a proportion barely below Quebec’s.

(Interestingly, according to Abacus, almost the totality of those in favour of Alberta independence identify as or support the Conservatives, which is not a good sign for the movement. The only way Quebec sovereigntists managed to reach 49.4 per cent in favour of separation in 1995 was by building a coalition that went beyond left-right wing politics. Many Quebec sovereigntists in the 1960s and 70s emerged from the left, yet their most prominent figure in 1995 was Lucien Bouchard, a former conservative minister.)

Regular readers of this column know that I entertain an occasional pleasure for politics-fiction (remember the Green Democrats?), and those fresh figures made me wonder: What would the current federal projection look like without Alberta? Without Quebec?

By using current numbers and taking the 34 federal Alberta districts out of the confederation, the Liberals would hold an average three-point lead over the Conservatives—a swing of about five points in favour of the LPC compared with the actual projection. The NDP and Green vote projections remain essentially similar. 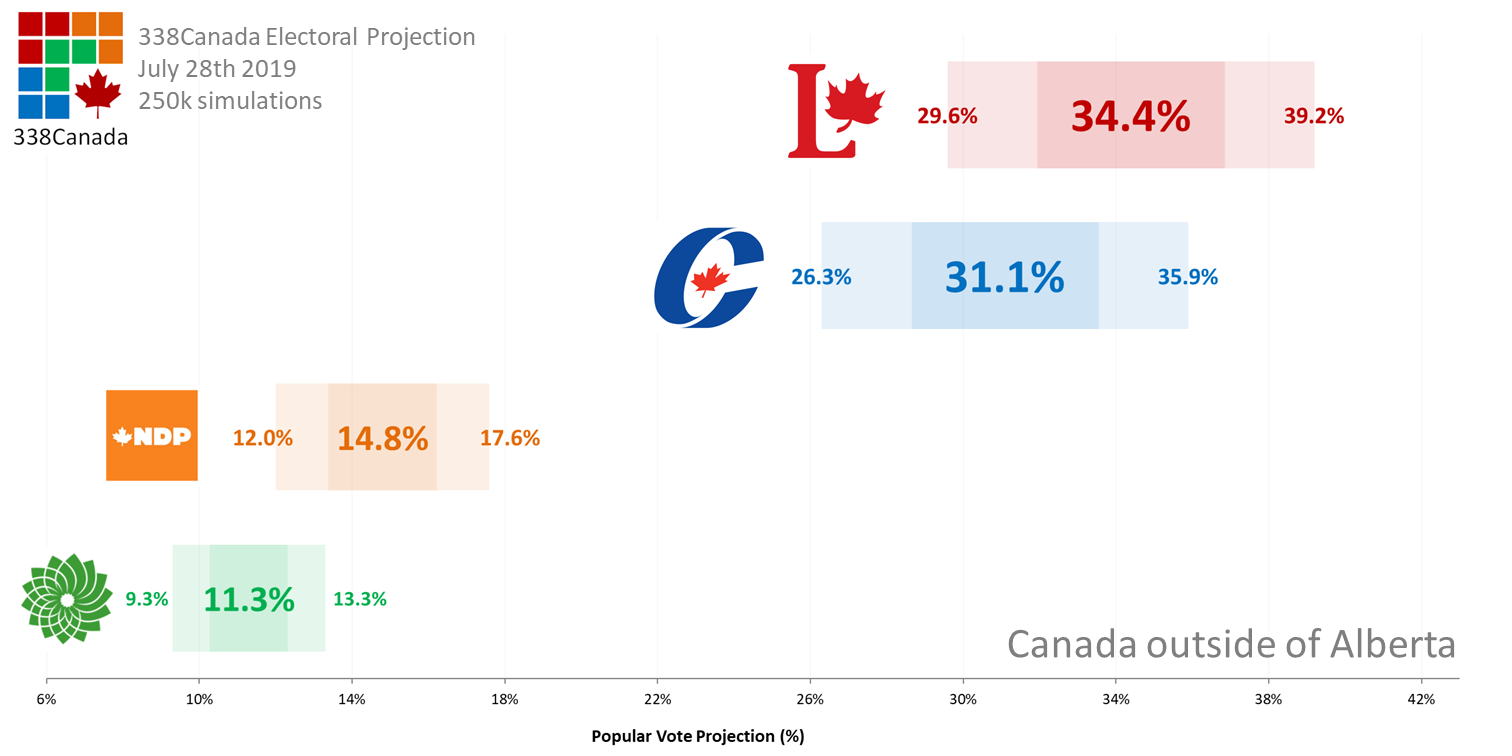 The seat projection would, not surprisingly, flip heavily in favour of the Liberals. By removing Alberta’s 34 seats, Canada would be left with 304 seats, which means the new threshold for a majority would be set at 153 seats (304/2 + 1). The Liberals’ seat projection average would sit just below that mark at 149 seats (even though the confidence intervals remain quite wide).

With an approximate 35 seat-lead on average, the Liberals would be hands-on favourites to win the election. 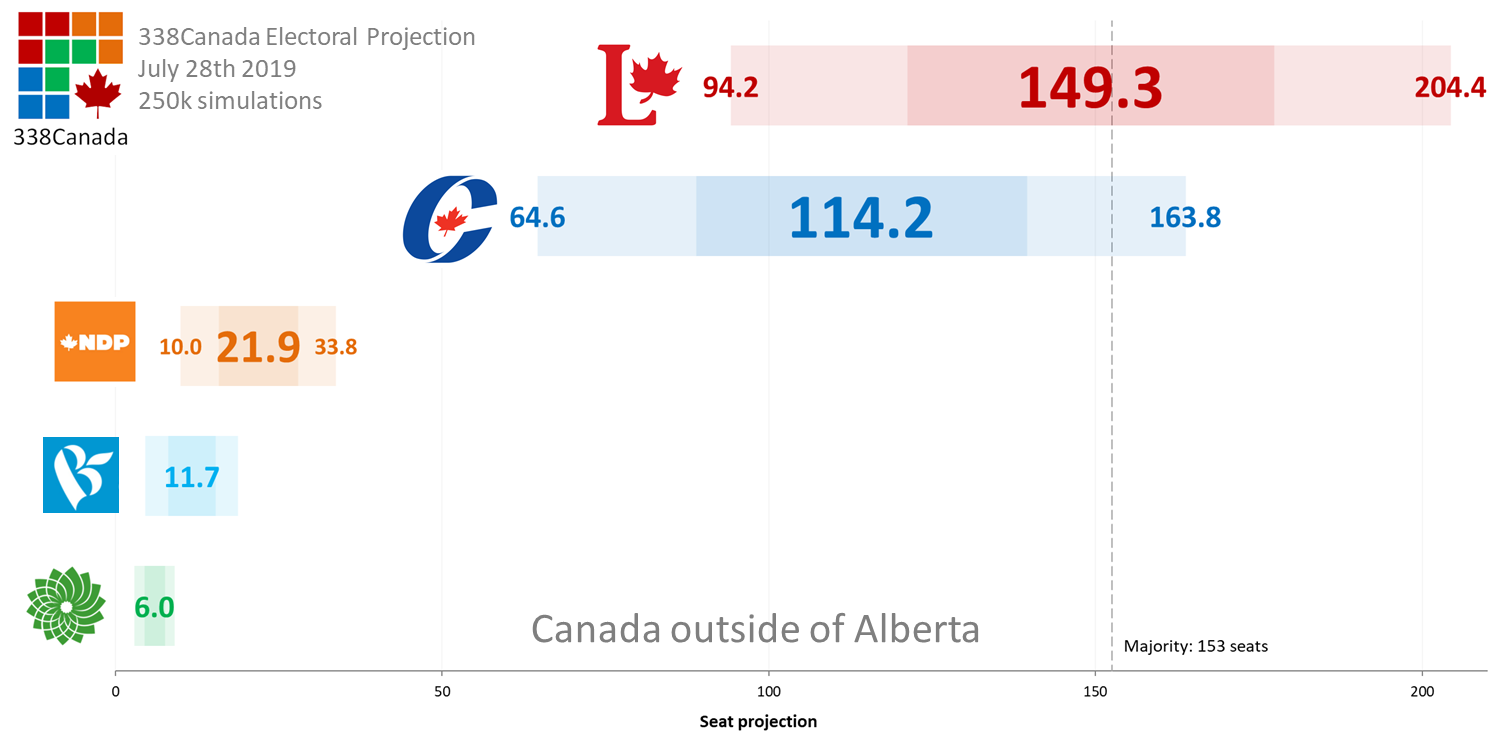 After the 1995 Quebec referendum, the Bloc québécois ruled the federal scene in Quebec by winning a majority of the province’s seats in five consecutive federal elections (from 1997 to 2008). That streak was broken in 2011 when Jack Layton won an astounding 59 seats (more than the BQ ever won in a single election) and leaving the Bloc in shambles with only four seats. Four years later, Justin Trudeau’s Liberals amassed 35 per cent of the Quebec vote and 40 of its 78 seats—its best result in the province since 1980.

Naturally, by taking out the 78 federal districts of Quebec out of the Confederation, the numbers would swing abruptly in favour of the Conservatives: 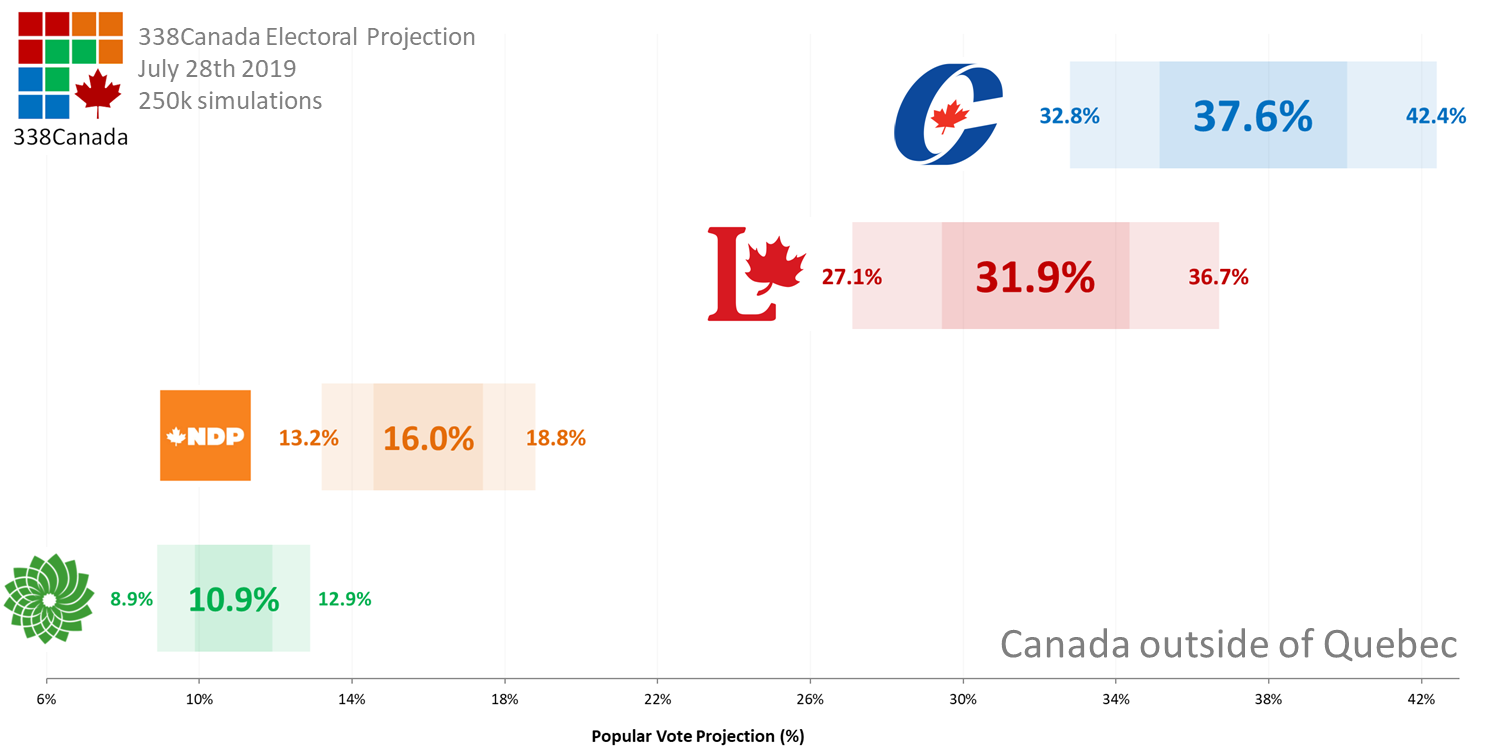 Without Quebec, the CPC would jump to a six point-lead over the Liberals. However, by removing those 78 seats, the House of Commons would be down to 260 seats, with nearly half of those located in Ontario. It is hard to imagine such a scenario could be held in permanent equilibrium.

With 131 seats required for a majority (260/2 + 1) in this alternate-universe House of Commons, the Conservatives would find themselves massively favoured to win the most seats. 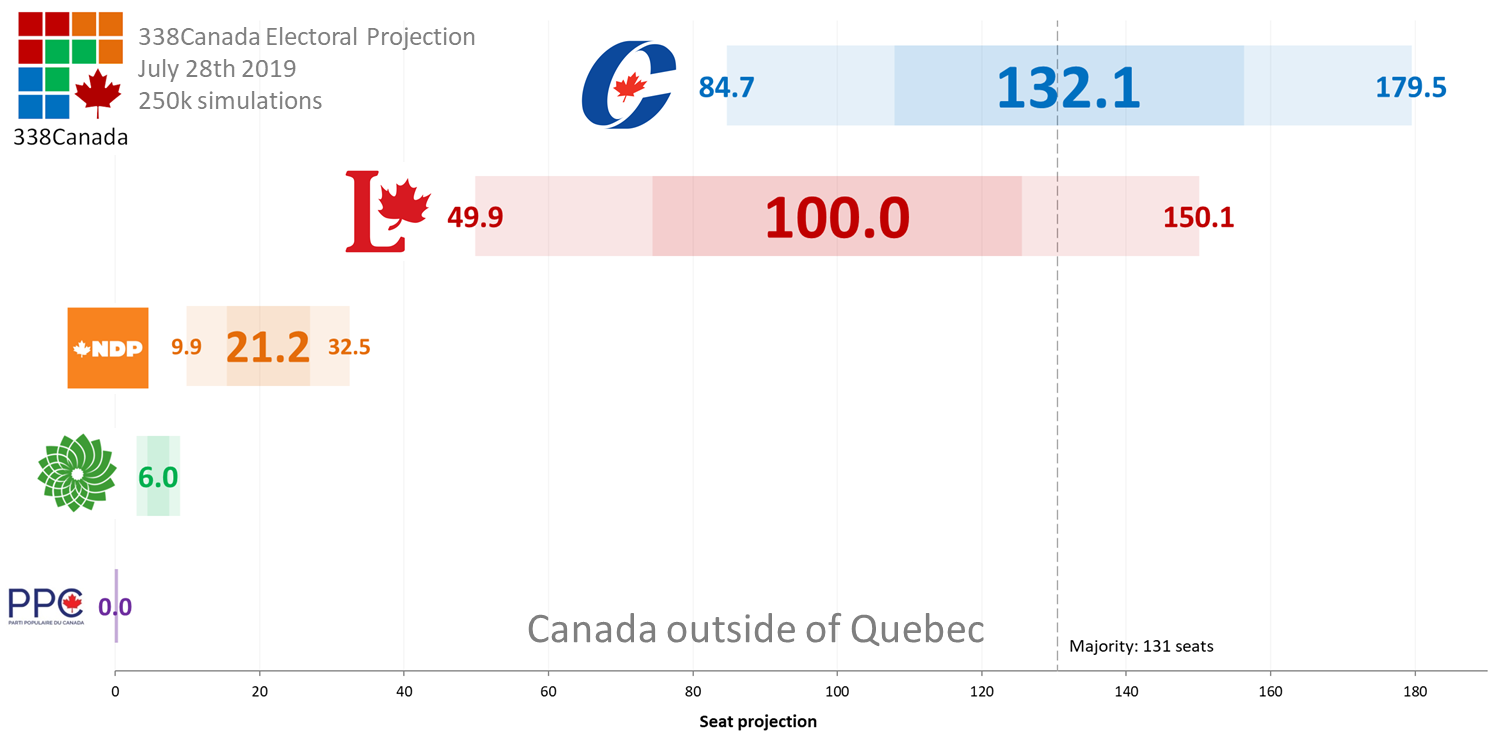 Do these numbers have any value in the real world?

I would argue that playing around with these numbers, such as with the hypothetical Green Democrats exercise, is a way to imagine and reinterpret the currents numbers. For instance, when the Bloc disintegrated in 2011, it could have been an opportunity for the Liberals to turn the tide on poor results in Quebec stretching back to Brian Mulroney’s first victory in 1984, but it didn’t because Ignatieff’s Liberals also lost big in Ontario.

Right now, a simplistic yet not inaccurate analysis would be: the Atlantic provinces and Quebec lean one way, Alberta and the Prairies lean the other way, and Ontario stands as the pivot (and B.C. as the wild card).

But which of the following scenarios is the most likely to happen this fall: 1) the Liberals slipping in Quebec, or 2) the Conservatives losing ground in Alberta?

The answer is obvious. And it tells you just how much Justin Trudeau will need the Quebec vote this fall.