In defence of the defunct Office of Religious Freedom

The office was certainly flawed, writes Evan Solomon. But the core concept was sound. 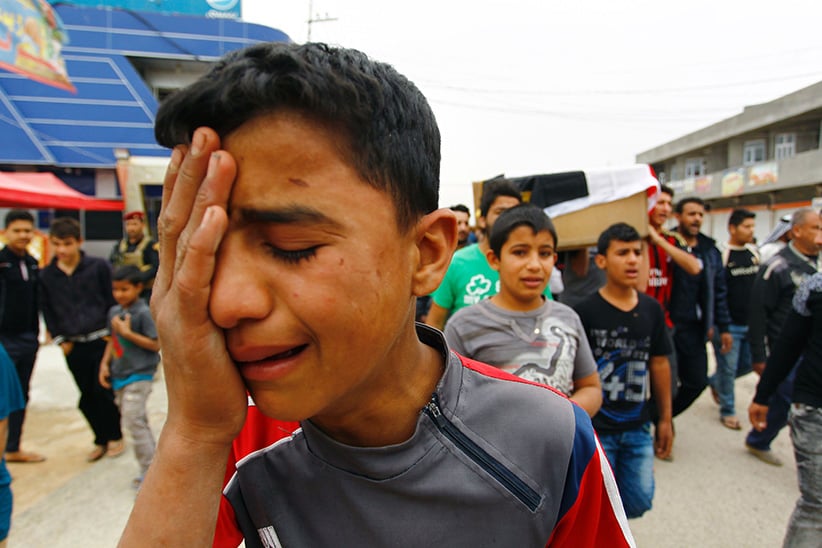 Iraqi relatives and friends mourn on March 26, 2016 in Iskandariyah, a town about 40 kilometres south of the capital Baghdad, during the funeral of some of the victims of a suicide bomb attack in a nearby village the day before. A suicide bomber blew himself up on a football pitch as trophies were being presented after a local tournament, killing at least 30 people, police and medics said. The Islamic State group claimed responsibility for the attack. (Haidar Hamdani/AFP/Getty Images)

In the age of terror, some deaths appear more equal than others. The horrific terror attacks in Paris, Brussels and the Easter attack in Lahore, Pakistan, rightly shocked the world, but just three days after Brussels, 29 people were slaughtered at a soccer match near Baghdad. It hardly registered a hashtag. Back in January, 86 people were massacred in Nigeria by Boko Haram. Do you recall a march? Do you even recall an image? What about recent attacks in Ankara or Damascus? It is tragically hard just to keep up, let alone calibrate an appropriate reaction.

But a condemnation of our collective empathy deficit is cheap self-righteousness. The more important question remains: what’s driving so much of this terror and what is the proper response? The questions are urgent not only because of the noxious bromides Donald Trump passes off as a coherent response to security issues, but because here in Canada, the Liberals have confirmed their intention to shutter the Office of Religious Freedom. Is that the right call?

Founded by Stephen Harper’s government in 2013 with a paltry $5-million budget, the Office of Religious Freedom was meant to advocate on behalf of threatened communities and support persecuted religious groups. Schoolbooks on pluralism were purchased in Bangladesh, while Aga Khan Foundation Canada got $290,000 for a similar program, $400,000 went to the Auschwitz-Birkenau Foundation, $500,000 was channelled to the Mennonite Central Committee to work with youth in Iraq, Syria and Lebanon on inter-religious dialogue, etc. The money was widely distributed.

Related: Making a terrorist on the streets of Brussels

Still, the office was subject to heated debate. Critics said it was proxy for evangelicals, and a cover for Conservative outreach programs into ethnic communities. A study done by the online publication OpenCanada revealed that Christian minority groups got the lion’s share of the funding.

For all that, it must be said that the debate over the renewal of the mandate of the office showed Parliamentarians at their finest: cogent, thoughtful arguments on all sides.

Conservative MP Garnett Genuis argued that the office “is not about promoting religion. It is about promoting religious freedom. These are two fundamentally different things.” Had many people even heard of the Yazidis in Iraq until the U.S. confirmed ISIS was committing genocide against them, as well as against Christians and Shia Muslims? Genuis said the office has been crucial in supporting and raising awareness of these issues.

On the other side, NDP MP Cheryl Hardcastle pointed out that the Conservatives’ commitment to the office was pure hypocrisy, especially in light of their 2012 decision to scrap the highly respected and non-partisan International Centre for Human Rights and Democratic Development, alongside cuts to groups like the Canadian Council for International Co-operation.

Foreign Affairs Minister Stéphane Dion, whose party supported the creation of the office in 2013, argued that religious freedom doesn’t need its own office because all human rights are “indivisible, and interdependent.”

Fair enough. There are many ways to do the work of the office, possibly more effectively. But the bigger point keeps getting lost, and that is to return to what Justin Trudeau once called the “root causes” of terror. Alongside the usual suspects like poverty and post-colonialism, one of the root causes is religion itself. In their own twisted ways, most terror groups are oriented around religious texts and practices. Every religion has its violent fanatics, but currently the extremist Islamist threat is ascendant. We shouldn’t be afraid to talk about that out of some misplaced loyalty to multiculturalism or secular society.

“There are some who seem to have something of an allergy to any office of government that uses the word ‘religion,’ ” Genuis rightly argued. “They react negatively to any reference to religion in the context of government action.” In government, religion is like sex. People do it but don’t talk about it. That has political consequences.

We not only ought to be saving religious groups from persecution—that should be basic foreign policy—we need to have a deeper understanding of the impact religions have on societies if we have any hope of making a difference in these conflicts. It’s hard to forget the accounts from the famous Black Hawk Down incident in Somalia, where U.S. soldiers flying in choppers over Mogadishu hung their feet out open doors. No one told them showing the soles of their feet to the local population was a profound insult, further turning the population against them.

The Office of Religious Freedom was flawed, and never quite lived up to its billing, hobbled by its puny budgets and by the Harper government’s propensity to imbue everything with a partisan mission. But it barely got off the ground, and the core idea is sound. If Canada really is back—this government’s mantra—it had better make sure it takes religion seriously. There is no point in tripling the number of trainers in Iraq if we don’t deeply understand the belief system of the very soldiers we are trying to support, as well as the ones we are fighting.

Conflicts of the future will have twin threats: terror, and the danger of giving in to a xenophobic response. Winning both sides will mean being unafraid to talk about religion, and engaging with religious communities. Without an office to do that, how does this become a government priority?