The Chateau Laurier battle, and the risk of marring Ottawa's historic core

In the Parliament Hill precinct, just about everything built, upgraded or repurposed demands scrutiny 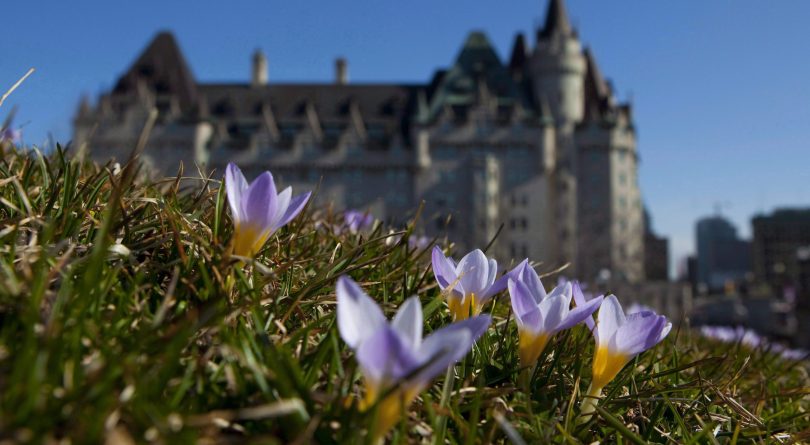 Say what you will about the owners of the Chateau Laurier, the folks who promote the Ottawa landmark’s dining and drinking venues don’t lack for marketing chutzpah. On the sidewalk by the Chateau’s front entrance on Tuesday—the very eve of today’s Ottawa city council vote on a widely reviled plan to add a hulking addition to the hotel—stood a cheerful chalkboard sign enticing passers-by with the promise that its La Terrasse restaurant offers “the best view in town.”

That’s no empty boast. The vista from those outdoor tables includes 19th-century crowd-pleasers like the Rideau Canal’s historic locks, Parliament’s asymmetrical East Block and the lacy steel of the Alexandra Bridge (circa 1900) over the nearby Ottawa River. And across the river—making a strong claim for 20th-century design—diners can admire Douglas Cardinal’s winningly curvaceous Canadian Museum of History, which opened a mere three decades ago.

That’s all looking out from the Chateau, mind you. Since it opened in 1912, the turreted hotel has itself been an integral element in many of the capital’s postcard shots. If the boxy addition proposed by its owners, Vancouver’s Larco Investments, won’t mar the view of those safely inside, it will spoil the scene for anyone gazing at it from some prime vantage points, particularly Major’s Hill Park, just to the north of the hotel.

So today’s Ottawa city council vote is of interest to anyone who cares about how Canada’s capital looks, and that includes all those annual summer pilgrims to the heart of our democracy. The vote is an important moment of decision in its own right, but also a good excuse to reflect on the quality of recent decisions about the architecture and monuments around Parliament Hill. The record is decidedly mixed.

Start with a good-news story—the recent expansion of the National Arts Centre, not far south of the Chateau along the canal. The $110-million project, mainly the work of Canadian architect Donald Schmitt, added inviting glass and wood to the unbeloved brown concrete of the old NAC. Yet Schmitt cleverly worked with the brutalist logic of that original building, instead of fighting it. The result is proving popular, and no wonder.

The jury is still out on Prime Minister Justin Trudeau’s decision two years ago to designate the former U.S. embassy—arguably Canada’s most valuable bit of vacant real estate, right across Wellington Street from the Peace Tower—as a new Indigenous centre. From the outset, Trudeau’s choice was questioned, and not only because he rejected the appealing, longstanding proposal to convert the building into a national portrait gallery.

As an Indigenous centre, the building is to be shared equally among Inuit, the Métis and First Nations, an unwieldy set-up for what isn’t really all that big a space. Exactly how it’s going to work remains unclear. As well, making whatever ends up going on display there serve a distinctive purpose for visitors to Ottawa will be a challenge, given the excellent recent moves to incorporate a lot more Indigenous material into the permanent collections of the National Gallery of Canada and the Canadian Museum of History.

Additions of public art and monuments in the past few years haven’t noticeably grabbed the public imagination. The bronze War of 1812 Monument plunked onto Parliament Hill’s lawn five years ago features a varied cluster of heroic combatants—a Métis fighter, a nurse, a sailor, a British soldier, etc.—bursting from a central point. It’s the aesthetic of a Guardians of the Galaxy movie poster. Situated just uphill from the moving, magnificent National War Memorial, unveiled back in 1939, the new 1812 monument suffers badly by comparison.

It might not be fair yet to assess the National Holocaust Monument, a concrete structure inaugurated a short walk east of Parliament Hill in 2017, since the area surrounding it, called LeBreton Flats, remains in the early stages of a prolonged redevelopment. One possible drawback, however, is that the angular, low-slung monument sits near the angular, low-slung Canadian War Museum, within sight of an angular, low-slung station on Ottawa’s new light rail line. What should be a stand-out style is beginning to blend in with the neighbourhood vernacular to the point where its intended visual impact diminishes.

The emptying of Parliament’s Centre Block for at least a decade of upgrades has spurred creative design responses. The West Block’s renovation—especially covering its courtyard with a modern steel-and-glass roof to create a temporary House of Commons chamber—has been a ringing success. Same goes for the creating a temporary home for the Senate in a 1912 train station, right across from the Chateau, where a sensitively scaled addition features a vertical motif that echoes, without merely copying, the station’s stately pillars.

The track record proves that historic buildings needn’t be left untouched to be properly respected. But it also serves as a warning that miscues in what’s built or expanded or repurposed in this sensitive precinct aren’t easily reversed. It’s a compact zone where mistakes matter and successes pay off big. Within an easy walk of Parliament Hill, there are plenty of spots where a chalk board on the sidewalk declaring, “Among the best views in Canada,” wouldn’t be out of place. But the wrong decision on the Chateau’s addition could eliminate more than a few of them.