In praise of partisan politicians

Partisan debate—fierce, witty, memorable—is a critical check on the power of a majority government. Bring it on. 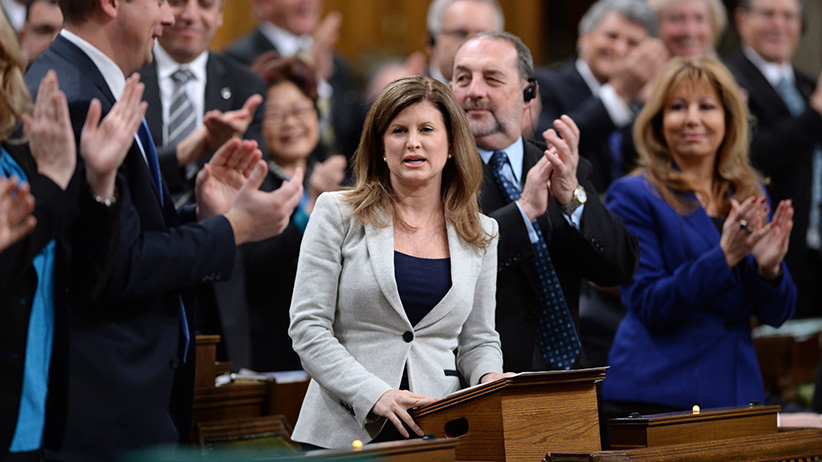 Opposition Leader Rona Ambrose is receives applause during Question Period in the House of Commons in Ottawa, on Monday, Dec. 7, 2015. (Sean Kilpatrick/CP)

“It’s been 25 minutes and the sunny ways are over.”

Rona Ambrose delivered that short eulogy for Justin Trudeau’s vaunted promise of a new tone in Parliament on the first day of question period. Before you could even say “welcome back” she was in a full-throttle, partisan debate about the Liberal spending promises and the combat mission in Iraq and Syria.

“Canada isn’t back. Canada is backing away,” Ambrose zinged, trying to pop another Liberal balloon before it got too high in the political sky.

NDP Leader Tom Mulcair joined her, taking Trudeau to task over climate change targets. “Once [the Liberal government] finally decides on Canada’s targets, will it make them binding?” he asked, ever the taunting court room prosecutor.

For his part, Trudeau beamed, gazing off in the parliamentary distance at Mulcair and then giving him a civics 101 lesson. Poor old Tom “forgets from time to time,” Trudeau said, that Canada is a federation and the government must work with the provinces. Ouch. Get too close to the sunny ways and the Liberal leader is not afraid to inflict a little sunburn.

It was such a relief. The sharp partisan tone, filigreed with heckles and jabs, is still alive and well. We should want it no other way. Partisanship is not a dirty word. It is an essential part of our democracy. And in a majority government, Conservative or Liberal, we should come to praise the true partisans, not bury them.

After 10 years of Stephen Harper’s often oppressive style, where mouthpiece minions like Pierre Poilievre wrongly defined partisanship as a licence to obfuscate, delay and bully, it has become stylish to dismiss partisanship as some kind of ancient disease, like political scurvy. Trudeau’s sunny ways were supposed to be a barrel of limes, the cure. Get rid of partisans in the Senate. Stop the partisan tone on Parliament. Have co-operative, genteel discussions, full of substance and concession. Work together as one happy parliamentary family.

That is not only the wrong diagnosis, it is a dangerous democratic mistake. It also happens to be a serious misreading of what Justin Trudeau actually wants.

Trudeau has always said he stands for the basic tenet of responsible government: accountability. He repeats this constantly, as he should. Accountability begins with a robust opposition. Its job is to be the watchdog, to provide a critical view of legislation and public policy. It must both oppose when necessary and propose alternatives when needed. That is the job of a true partisan. We want our members of Parliament to authentically represent different world views, views that reflect both diverse political philosophies and specific local needs. The best way to do this is through a vital, a passionate, partisan debate. “The role of the Opposition in our parliamentary system reflects the premise that a delicate balance must be maintained between permitting elected governments to govern and legislate effectively and ensuring that power is exercised with care and with respect for minorities and for dissenting views,” explains the parliamentary website. I’m the sure the close to 200 rookie MPs have read this carefully.

Partisan debate is a critical check and balance on the power of majority governments. The Senate was meant to do part of this job, but its reputation as a scandal-plagued body of unelected officials has undermined its credibility. That means it’s more important than ever for the opposition to use public opinion to slow down the work of a majority government.

In order to light the fire of public opinion, though, partisan debate needs to be interesting, it needs to be a spark. That means a combination of style and substance. The yearning for question period to turn into an earnest, academic symposium is wrong-headed. Question period is about public performance. Memorable lines. Putting the powerful on the spot. The less entertaining, more substantive debate occurs—or it ought to occur—in committees. They are vital. But hands up if you watch the work of committees every day?

As the Liberals and the NDP discovered during the Harper years, galvanizing the public through popular opposition is a hard slog. Mulcair’s knifework in the House on the Senate scandal, or the rallies against the prorogation, all had an impact on the electorate, but it took a long time to measure it. Still, that’s partisan work at its best. For the opposition’s supporters, it was crucial to oppose Stephen Harper’s view of the country. Conservative supporters understand this better than anyone. They worked for more than a decade against the Liberal vision of Canada. They tore apart their own party, splintered it, reunited it and finally, after years of diligent, often brilliant partisan opposition work, they won the government. Opposing the Liberal sponsorship scandal, the Liberal views on crime, the economy, foreign affairs and resource development made for democracy working as it should.

At their best, partisans build parties, create movements, make changes. They are motivated to march, raise money, and show up at rallies. Tommy Douglas was just as partisan as Pierre Trudeau and Stephen Harper. They all have particular world views they fought for and hoped to transform into legislation.

At its worst, partisanship is about maintaining power, a cheap rationalization for destructive strategies that keep the public in the dark about policy. This is indefensible, but all too common. Using government funds for party messages, undermining the work of committees, attacking independent officers of Parliament, muzzling public servants, or repeating sneering little talking points: all of these may occur under the guise of partisan behaviour, but they are merely distorted political strategies in the service of power, not ideas.

In his new book What Happened to Politics, Bob Rae decries the state of our discourse. He provides an excellent analysis about how the permanent campaign and its obsessive focus on fundraising, slicing the electorate into tiny special interest groups, has undermined faith in our system. That is all true. But that is not the fault of partisan behaviour, it is the distorted use of partisan energy.

What the new Trudeau era ought to bring is a tougher, sharper, more substantial debate in the House. Toss the notes away and let the debate get fast, smart, and passionate. Let’s see ideas flayed and ripped apart. Championed and celebrated. Let’s watch our best and brightest go at it in a way that is all too uncommon: passionate disagreement without violence. That won’t stop the good work of democracy and governance. That is the good work of democracy.