In Quebec, orange is the new Bloc

More and more Quebec separatists are fleeing the Bloc in favour of the NDP. Could the party be wiped off the map? 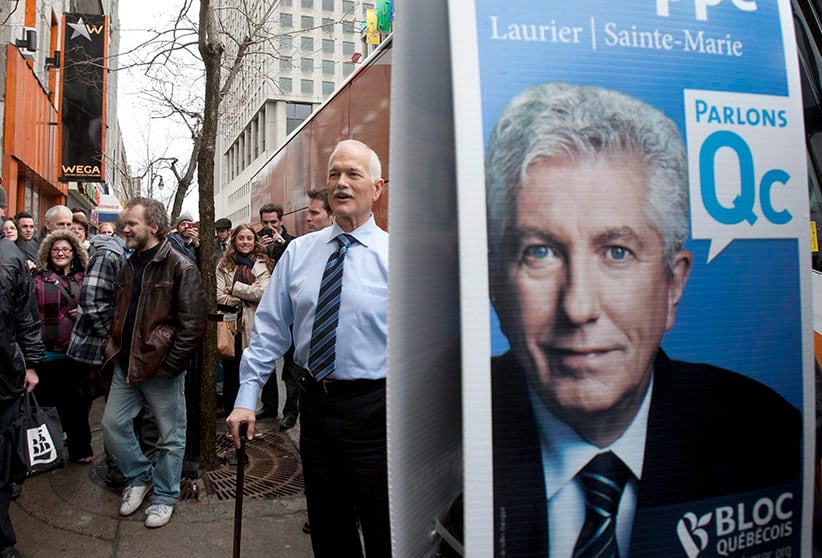 Late last August, the Bloc Québécois revealed its catchy campaign slogan: “Qui prend pays prend parti” (“Choosing a country means choosing a party”). The line is everywhere on Bloc campaign material and the inference is clear: After years as the go-to protest party for disaffected Quebec sovereignists and federalists alike, the Bloc is now squarely geared toward Quebec independence—and is interested only in harvesting the indépendantiste vote.

Yet it is a mark of the decline in the Bloc’s electoral fortunes that even sovereignists aren’t necessarily supporting the Bloc this time around. Instead, many have continued the trend of the last federal election and chosen the NDP as their protest vote of choice. “The orange wave in 2011”—in which the NDP took 59 of the province’s 75 seats—“robbed the Bloc of its abilities to be effective at the federal level. It doesn’t have any power left,” says Gaston, a longtime campaigner for both the Bloc and the Parti Québécois, who didn’t want his last name used. This time, he is volunteering for his local NDP candidate.

As the 2011 results suggest, Quebecers’ desertion of the Bloc isn’t particularly new. Yet the Bloc still garnered about 23 per cent of the votes in Quebec—likely the very votes the party is trying to hold onto this time around. Gaston doubts the party will get even close to that this time around. “The Bloc is going to be swept off the map,” he says.

Related: The renewed militancy of the Bloc Québécois

He’s certainly not the only one with this inkling. In a recent interview with Radio-Canada, former PQ environment minister Yves-François Blanchet said he refused the Bloc’s offer for him to run for the party—if only because he didn’t want to be part of the imminent bloodbath. “Is it possible that the Bloc will disappear at the end of October? Clearly, yes,” Blanchet said. The Bloc, he added, was a victim of the overall decline in the sovereignist movement. “We can’t pretend that there is a new momentum in the movement,” he said. (Bloc spokesperson Dominic Vallières said there was never any “formal approach” on the part of the Bloc to recruit Blanchet.)

Even Bloc Leader Gilles Duceppe is in trouble. A recent CROP poll, commissioned by the NDP, has him trailing incumbent NDP candidate Hélène Laverdière by nearly 30 points. Meanwhile, the NDP has already attracted several notables of the sovereignist movement to its ranks. Farouk Karim was once the PQ candidate in the provincial riding of Outremont, home of NDP Leader Tom Mulcair’s federal seat. Today, Karim is an NDP staffer. In June, the NDP recruited longtime Bloc adviser Chantal Proulx to its side.

For diehard sovereignists, a large-scale defection to the NDP in Quebec is a nightmare scenario. By supporting a party that has a legitimate chance of forming a government, it suggests, once again, that Quebec, with all its perceived differences, can nonetheless participate and thrive in the Canadian experiment.

These defections also illustrate the NDP’s endurance in Quebec. In sweeping the province four years ago, and maintaining its popularity since then, it has effectively made itself what the Bloc used to be: a way to stem any Conservative electoral success. Harper remains woefully unpopular outside a handful of ridings, mostly in and around Quebec City, with the NDP (and not the Bloc) coming in second in 2011.

The NDP’s strength was enough for the FTQ, Quebec’s largest union federation, to throw its support behind the NDP. Quebec sovereignty is ingrained in the FTQ’s history; nevertheless, its management has launched a sort of “anyone but Harper” campaign supporting NDP candidates (and one Liberal) across the province. “The priority is to get Harper out and, in Quebec, the NDP has the best chance of doing that,” one Montreal-area Péquiste and former Bloc militant told Maclean’s.

Bloc spokesperson Vallières played down the FTQ’s quasi-endorsement of the NDP. “The FTQ made a hasty decision. The NDP is only ahead in Quebec. It is declining in British Columbia and Ontario. I think there’s going to be a lot of disappointment in October when the NDP doesn’t form the government.”

Still, the NDP is clearly chuffed at having the wind in its sails four years after its breakthrough—and not in the least bit mystified as to why sovereignists would support a proudly federalist party. “Most of them are lefties. They think the Bloc is done, they want to replace Harper and they’ll never vote for Justin Trudeau,” says NDP spokesperson Karl Bélanger.

For the NDP, it’s not exactly a ringing endorsement, but a vote is a vote. And while sovereignists will support a federalist party, they seem unable to bring themselves to vote for a Trudeau. Even in death, Pierre Elliott Trudeau remains a mortal enemy. Some things really don’t change.