In search of a manifesto for the Conservative Party of Canada 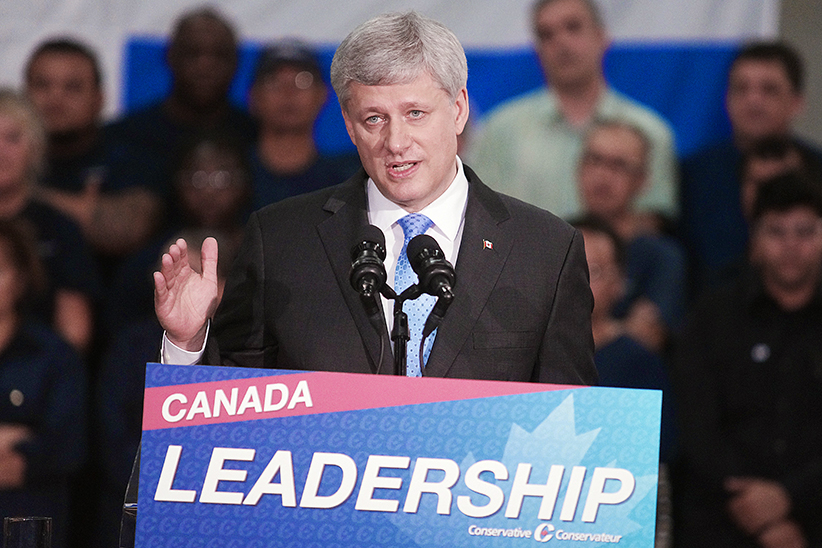 Do Conservatives have manifesto envy? In the lead-up to this week’s party convention in Vancouver, Conservatives are talking about renewal, transformation and post-Harper change. Early leadership candidates like Michael Chong, Maxime Bernier and Kellie Leitch all have ideas, but most are still nascent and vague—nothing like the furious ideological debate going on inside the NDP, provoked by the controversial Leap Manifesto. That may come as a relief to some Conservatives, who see the NDP melting into a tiny puddle of irrelevance, but others believe something radical is needed if the Liberals are to be defeated.

The truth is, Conservatives already have their own version of the Leap Manifesto. It was delivered to them back in April 2003 by a young Stephen Harper in a speech to the Civitas group. Harper was just a year into his term as leader of the Canadian Alliance party and facing not only a fractured Conservative movement but also what many believed to be an unbeatable Liberal dynasty. “Do we actually stand for something, or don’t we?” Harper asked the crowd, confronting what he perceived to be electoral pandering by the Conservatives. “Conferences were held to create and sell a new ‘vision,’ ” Harper said, draping the word with disdain. “In practice, this amounted largely to making existing policy stands vague or simply invisible.”

In contrast, Harper proposed hard policies grounded in classic small-l liberalism and Burkean conservatism. While individual freedom, limited government and rule of law were still core conservative ideals, Harper believed the battle with the deficit-slaying, free-trade embracing, budget-balancing Liberals would be won and lost on values.

Related: The NDP’s hard left turn into an existential crisis

“While retaining a focus on economic issues, we must give greater place to social values and social conservatism,” Harper argued, suggesting the new enemies of conservatism were the left’s “system of moral relativism, moral neutrality and moral equivalency.” He viewed the fight against terror and his tough stance on crime as essential to a new conservative future.

Hard to say if this really won him power, or if the sponsorship scandal finally ended the Liberal era, but give the man credit. Harper thought deeply about these ideas and they united his party in a new West-East coalition of economic conservatives, bringing him to power for almost a decade. Almost all the roots of his policies—the good ones and the most destructive—can be found in that speech. The irony is, Harper ended up abandoning many of the principles he once championed.

Instead of unleashing social conservatives, Harper muzzled them, delivering them nothing on key issues like abortion or same-sex marriage. He never reformed the Senate as promised. His old Reform party commitments to direct democracy disappeared. In fact, he spent the vast majority of his time in office practising the same Kenysian economics of big government and deficit-stimulus that he once so openly derided. So while the party will celebrate the Harper years—and why not, he did win three elections—it’s hard to see just what kind of conservatism Harper actually practised. Even more difficult, still, is to define what a conservative in 2016 really is.

Enter businessman and reality-TV star Kevin O’Leary, who has ordained himself the new, disruptive force in the conservative movement. O’Leary comes with some momentum, sure, but he has no manifesto, no ideological framework beyond focusing on the economy. As he has told me on numerous occasions, he doesn’t “give a damn” about the Conservatives’ past and he’s labelled members who won’t ditch past ideas “losers.”

Related: Kevin O’Leary and the politics of disruption

The problem is, parties don’t erase their past like chalk on a board. They evolve. It has been evident for years that O’Leary has three very valuable talents: making money, making news and making enemies. In the U.S., Donald Trump has transformed this combination into a formula for populist political success. O’Leary campaigns from the same spreadsheet, albeit with a less volatile currency. It could tap into frustration. But it’s a long shot.

The hard truth is, Justin Trudeau’s success at co-opting the middle is what is really confounding Conservatives. Like Harper, Trudeau united the left, only he didn’t bother to go through official channels. Instead, Trudeau just co-opted their ideas and watched as NDP Leader Tom Mulcair helplessly obliged, ceding all the progressive ground on issues like deficits, immigration, the environment, First Nations and the war on drugs. Suddenly the middle ground, which used to be described as mushy and irrelevant, is the political place to be.

Conservatives have to figure out if they want to battle Liberals for the political centre, or revert to the 2003 Harper manifesto and fight on values. A party that turns the page on the Harper years, and then runs on his original manifesto? Now wouldn’t that be the biggest irony of all.