In this election, conservation has become a dirty word

Canada used to be an international leader in wildlife conservation. But these days, the silence is deafening from all three major parties. 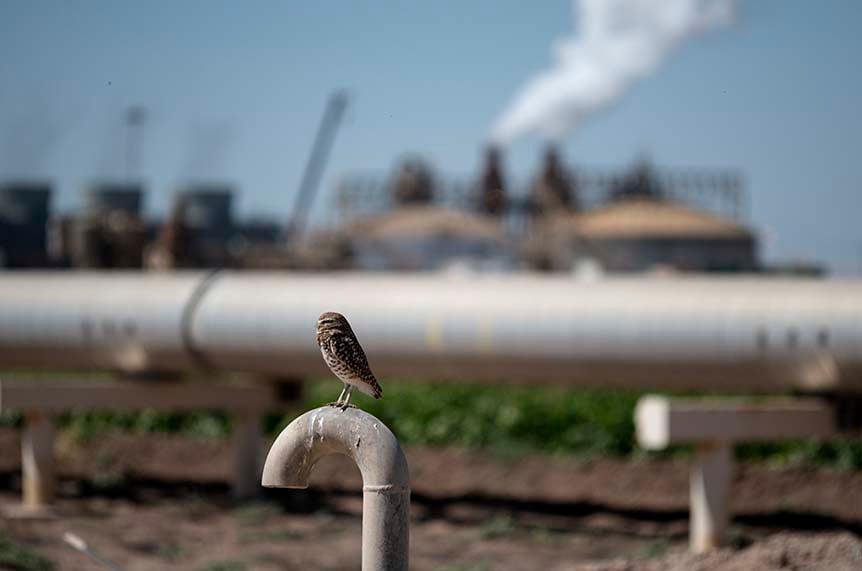 A Burrowing Owl rests outside a geothermal power plant in Imperial County, CA on April 18, 2015. The Salton Sea serves as a refuge for a variety of wildlife. (Bonnie Jo Mount/Getty Images)

University of Victoria biologist Julia Baum and her colleagues didn’t intend to lambaste the Harper government in the middle of an election for failures to protect Canadian fish from extinction, but if the coincidental timing of their just-published study calls attention to a devastating environmental calamity, so much the better. After all, nothing in the election campaign so far would suggest that wildlife in Canada and around the world is disappearing faster than at any time in human history. The pace of species loss—about 1,000 times faster than the natural rate, say scientists—now rivals the “great extinctions” of the distant past, such as the last one that obliterated the dinosaurs. But, as party leaders make speech after speech promising millions for this and millions for that, even the global threat of climate change warrants barely a mention. No wonder the growing number of vanishing fish, mammals and other species just hasn’t come up.

What’s odd is that Canada is supposed to be an international leader in wildlife conservation. More than two decades ago, the country became the first industrialized nation to sign the United Nations Convention on Biodiversity (UNCBD) to halt the disappearance of the world’s wildlife by 2020. Canada is the permanent host of the convention’s international secretariat in Montreal and, in 2010, it joined almost 200 other signatory countries in Aichi, Japan, to set benchmarks. But, with just five years to the 2020 deadline, conservationists and researchers warn that the Harper government is nowhere close to meeting its key targets for protecting species or setting aside conservation lands.

Take marine fish, for instance. Rather than helping the 62 fish declared at risk of extinction by its own expert panel, since 2003, the government has denied protection or ignored three-quarters of them, says Baum, co-author of the just-released report in the Canadian Journal of Fisheries and Aquatic Sciences. And it’s not just fish. Simon Fraser University’s Arne Mooers, a professor of biodiversity and evolution, worries that the government now habitually uses a loophole in the federal Species at Risk Act (SARA), one that sets no timeline for sending its expert committee conclusions to cabinet, so it can avoid listing a species as “at risk” and triggering legal protection. The minister of the environment, says Mooers, “can simply sit on the recommendations and ignore them.” Since 2011, none of the 67 species recommended for listing by the expert panel (and without previous protection under the law ) have been listed—except for three bats whose emergency listing as endangered was demanded by the government of Nova Scotia. Currently, 713 wildlife species in Canada are recognized as at risk by the expert panel, but 192 of them are without legal protection after the federal government has either denied them official listing or—as is increasingly the case—simply not made a decision.

Not that wildlife is any further ahead if it finally is listed. In a recent paper in the journal PLOS ONE, Memorial University biologist Brett Favaro and colleagues found SARA’s legal protection and mandated recovery efforts have done little good since the law was passed in 2003. “Eighty-six per cent of species in Canada that were in the system [and assessed more than once by the government’s arm’s-length expert panel] either deteriorated or stayed at the same level of endangerment,” he says. No surprise, says Baum, since the government can take between three and four years to prepare its (routinely late) species-recovery plans. Cutbacks to science, and the end of habitat protection in the Fisheries Act and the Navigable Protection Act (formerly the Navigable Waters Protection Act) hasn’t helped either, says Mooers.

The government’s UNCBD targets also promise to set aside large tracts of wildlife habitat, but that pledge looks hopeless, too. A July report by the Canadian Parks and Wilderness Society (CPAWS), for instance, says Canada’s commitment to protect 17 per cent of its land and water for wildlife by 2020 is a long shot, considering just 10 per cent is protected now (far less than most other signatory countries). “We’re not on track to get there,” says Alison Woodley, national director of CPAWS’s parks program. At the current pace, “it will take us more than 50 years to get to the 17 per cent, not five.” And while the government promises protection for 10 per cent of marine and coastal areas, little more than one per cent is protected currently, and most remains vulnerable to fishing and development.

No one from Environment Minister Leona Aglukkaq’s office or Environment Canada responded to interview requests from Maclean’s for this story. Instead, a written statement explained that “the Government of Canada is committed to protecting species at risk while supporting responsible development in Canada’s natural resource sectors.” It pointed to, among other things, 2014’s National Conservation Plan, which provides $252 million over five years to (mainly) protect more wildlife areas. However, calculations by University of British Columbia scientist Sarah Otto suggest the investment might add another 0.1 per cent to the nation’s protected land, at best. “It is very difficult to know what the National Conservation Plan is supposed to achieve,” says Woodley of CPAWS, “because there isn’t really a plan there.”

Nor—in the haze of campaign-trail dust—is a viable alternative especially clear. Liberal and NDP environment critics were not available for interviews before publication. The Liberal election platform does address conservation, committing to Canada’s UNCBD promise on protected land and marine areas. There are also pledges to return $40 million to ocean science previously cut by the Conservatives and to “review” changes to the Fisheries Act, among other laws. From its website, the NDP appears to focus on climate change and energy and their impact on the environment.

The Green party’s environment critic, Andrew Park, did respond to the request for an interview. “The issue of biodiversity conservation has surfaced not at all during this election campaign,” says Park, who describes his party as policy-ready but otherwise unable to get the issue to the election table. “It’s a slow-motion crisis that’s largely taking place under the radar of the average Canadian.”

Many global targets agreed to in Aichi face long odds halfway to the 2020 deadline. But for Canada, says Mooers, it should be easy. We’re home to the world’s longest coastline, 20 per cent of its wild forests and nearly a quarter of its wetlands. “Canada was the leading champion of the convention on biodiversity,” says Mooers. “This is one where we should really be leading the world.”