The Prime Minister takes questions — except on Trump

'I look forward to working with whomever you elect come November,' Trudeau tells students at American University 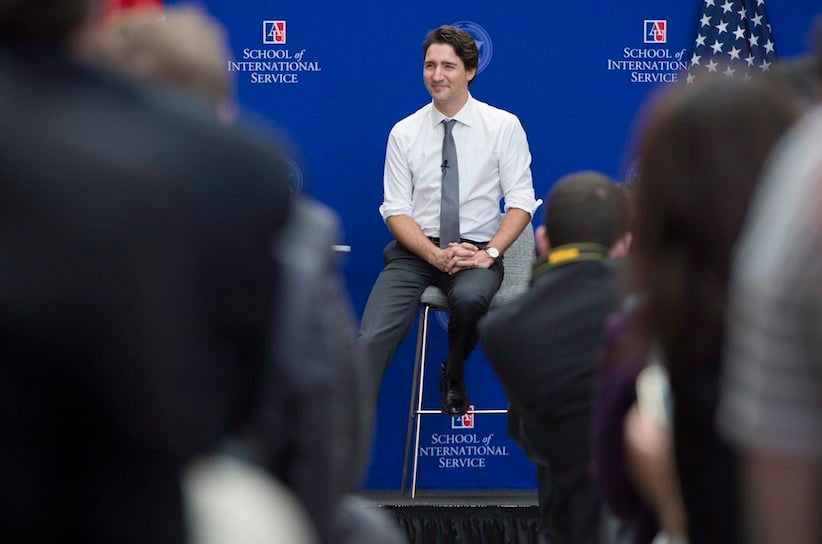 WASHINGTON — With the pomp and pageantry of an official White House visit behind him, a more relaxed Justin Trudeau held court with an enthusiastic group of university students Friday as he prepared to wrap up his three-day visit to Washington.

Canada’s celebrity prime minister, clad in loosened tie and rolled-up shirt sleeves, fielded questions on everything from the U.S. election campaign and Donald Trump to the mission in the Middle East and whether he’s accepting resumes.

He was forthright in all of his answers — except, perhaps, when it came to the presumptive Republican front-runner, whose combative, controversial campaign has both riven and riveted the U.S. electorate.

“Canadians … find it hard to sustain anger and fear for very long. We are an optimistic, hopeful people; we know and generally like our neighbours,” Trudeau said, his audience erupting in laughter.

“Whoa — I meant that within Canada, but it applies to the United States, too.”

Whenever he has the chance to speak to disparate groups of people, Trudeau said, “you realize that the things that unite us are always far greater than the things that divide us.”

“Ultimately, I have confidence in the America electorate and I look forward to working with whomever you elect come November.”

At one point, Trudeau was asked whether — given all the talk of “moving to Canada” in the event of a Trump win — he would erect a wall at the border and make America pay for it, much as the bombastic millionaire has threatened to do to Mexico.

“Every election season there are people who swear that if the candidate they don’t like gets elected, they’re moving to Canada,” Trudeau chuckled.

“If over the past decades that had been the case, we’d have more people in Canada than the United States right now, instead of being one-tenth your size. It becomes an easy thing to cry out.”

At another juncture, Trudeau described how he and his Liberal party challenged the tactics of the re-election-seeking Conservatives with some counter-intuitive thinking, and by putting their faith in Canadian voters.

“We have to have public discourse that goes beyond the knee-jerk reactions,” he said, referencing a Conservative law that stripped dual nationals of their Canadian citizenship when convicted of a terrorist act — elements of which the Liberals have since moved to repeal.

“I found myself in a situation on stage against the former prime minister, arguing that yes, a man who he had just stripped the citizenship of for being convicted of a terrorist act should have his Canadian citizenship restored — even though he had figuratively and perhaps even literally ripped up his Canadian passport,” Trudeau said.

“And yet I stand here as Canadian prime minister.”

Trudeau began his day on a far more solemn note, placing a wreath at the Tomb of the Unknown Soldier at Arlington National Cemetery.

He did the same at a tall cross which commemorates Canadians who died fighting alongside Americans in two world wars and Korea. Stone-faced, Trudeau crossed himself before both monuments as onlookers quietly snapped photos.

Just after his arrival at Arlington, a burial ground for soldiers since the Civil War, he surprised a group of eighth-graders from Georgia who were on a field trip to the capital.

Their school headmaster is Canadian, but he wasn’t on the trip. So the adults in attendance excitedly tried reaching him by phone they learned his prime minister was coming.

“He’s going to freak out,” Cory Martin, dean of curriculum at Calvary Day School in Savannah, Ga., said of his colleague.

The prime minister opted to forgo a formal speech at the university and instead take part in a free-flowing exchange with the students, who listened — rapt — as he prowled the stage and described his vision for Canada and the world.

Later, Trudeau delivered a speech and took part in a hosted question-and-answer session sponsored by Canada 2020 and the Center for American Progress.

The sustained health of progressive politics will have four pillars, he said: broad economic opportunity, transparency, innovation and diversity.

“No progressive movement can succeed if it doesn’t embrace the fundamental truth that diversity is strength. Canadians know this _ they live this truth every day, as do our American friends,” he said.

“Fear is easy. Friendship? That takes work. But Canada and the United States have proven, time and time again, that finding common ground is worth the effort.”

Paul Wells on the PM’s visit