Politics Insider for May 28: Wilson-Raybould and Philpott's choice, NDP support is M.I.A., and May and Kenney get their National Energy Program groove on 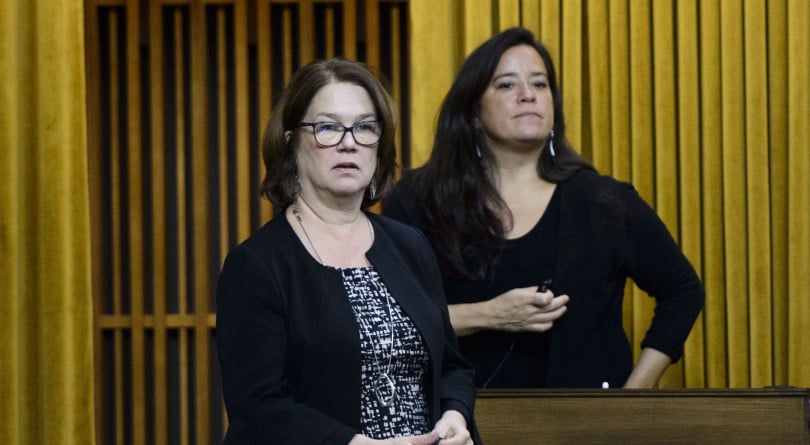 Independent MPs Jane Philpott and Jody Wilson-Raybould vote in the House of Commons on Parliament Hill in Ottawa on Tuesday, April 9, 2019. (Sean Kilpatrick/CP)

Going their own way: Nearly eight weeks after Prime Minister Justin Trudeau sought to finally change the channel on the SNC-Lavalin saga by expelling Jody Wilson-Raybould and Jane Philpott from the Liberal caucus, the pair announced a reset of their own. In back-to-back press conferences in their respective ridings, the two MPs said they’ll run again this fall as independents.

With both women dressed in white—”the hue of new beginnings, and also famously worn by suffragettes,” as Maclean’s senior writer Anne Kingston notes—the pair announced an ambitious and idealistic agenda that took more than a few shots at the Liberal promise of “Real Change” in 2015:

As they spoke, one could imagine the mass Google search for “how many Independents are re-elected federally historically?” The answer: less than one-third of the time, though it’s key to note many of these candidates were expelled from a political caucus for scandal or misbehaviour, not for acting on principle, as was the unprecedented case with Wilson-Raybould and Philpott last April after they vocally opposed  Trudeau’s handling of the SNC-Lavalin file. Notably, no Independent candidate has won election federally since 2008, when Nova Scotia’s Bill Casey and Quebec radio host Andre Arthur won.

But we’re in new territory here. Never have such high-profile candidates, key players in a scandal that rocked the government, chosen to run as Independents. Media coverage is assured. Nor have Independent candidates issued a tandem rallying cry for a collaborate, non-partisan approach to politics, one destined to resonate amid frustration over the toxicity and divisiveness of political discourse. (Maclean’s)

Show me the freedom: Sure, writes Paul Wells, it’s possible that Wilson-Raybould and Philpott will win as independents. But will their Jerry Maguire-esque rallying cry for a new type of politics, freed from the influence of corporate lobbyists and special interests, convince other politicians to follow the same path? It’s a long shot:

It’s striking that most of the reforms Philpott advocated in her brief speech to constituents were process reforms. Maybe she and JWR could inspire others to speak their minds, colour outside the box, rebel against party strictures. Well, let’s see. Today the Liberals form Her Majesty’s government. After an election, they still might. Perhaps they will be reduced to a minority of seats in the Commons, in which case this government of political rookies will be living with the constant fear of defeat that defines minorities. In which case, every Liberal minister will say, on nearly a daily basis, “Let’s see now. I can continue to cling desperately to power, with the car and the driver and the office staff and the ability to get at least the odd bill passed through the Commons—or I could join Jody and Jane back there near the curtains, next to where Max Bernier used to sit. Hmm, that’s a stumper.”

No power plays here: There’d been no end to the speculation about which party, if any, they would join, with the Greens seen as the most likely option. Both Wilson-Raybould and Philpott spoke warmly of Green leader Elizabeth May in their speeches, but chose independence instead.  Later, May said she told them she was willing to step aside as leader of the Greens if either had leadership aspirations. When the Trudeau Liberals and their staunchest loyalists had sought to discredit the two women during the height of the SNC-Lavalin controversy, both were at times accused of pursuing self-serving agendas to seize control of the party. “It’s hard for people to quite understand the extent to which this wasn’t a negotiation,” said May. “Neither of them were interested in taking on leadership roles.” (Canadian Press)

Still, May was cool to their decision to run as independents: “I honestly think they’ve made a mistake.” (CTV News)

The Dipper dip: Jagmeet Singh also reached out to the two MPs about becoming NDPers but it doesn’t appear they ever considered that option very seriously. Nor are they the only ones giving the NDP a pass, it seems. A new seat projection by 338Canada founder Philippe J. Fournier for Maclean’s shows the party being nowhere close to matching its performance in the 2015 election: “Even the latest Liberal misfortunes and the long-awaited election of Singh in Burnaby South in February did not seem to give the NDP a much-needed boost in voting intentions.” (Maclean’s)

Déjà vu: Clearly some were too quick to write off a Green-Conservative meeting of the minds for the upcoming election. May, an avowed foe of fossil fuels, announced Monday that until the world can ditch the dinosaur juice, Canadians should consume exclusively extracted-in-Canada oil by banning foreign oil imports. Which made Jason Kenney‘s day in Alberta: “Great to hear @ElizabethMay has come around to support the goal of replacing foreign oil with Canadian oil.” And suddenly we have the makings of National Energy Program 2019. (Canadian Press, Kenney Tweet)

Right on schedule: In Question Period Andrew Scheer went on the attack against the Liberal decision to put the largest media union Unifor on a panel that will decide who doles out $600 million to media companies. The Conservative leader accused Unifor of having “highly aggressive and partisan goals” of opposing his party, while Heritage Minister Pablo Rodriguez in turn accused Scheer of playing a “dangerous game” with his criticism. In other words, the whole plan is unfolding exactly as anyone but the most blinkered of Liberal partisans could have predicted. As Andrew Coyne puts it in the National Post: “It is a disaster that is now unfolding. If there were ever the slightest chance the process would not be politicized, that has already vanished.” (National Post)