Inkless spies with his little eye ... 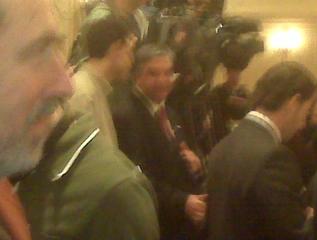 A shadowy figure who bears a haunting resemblance to Peter Van Loan!

So where is he? Oddly, not out gladhanding with his fellow Conservatives on the campaign trail — he’s hanging out at the Royal York, where Stephane Dion is giving a speech to the Economic Club of Canada.

Oh and just a note to anyone at the Little Shop of Increasingly Testy Email Blasts … it’s not actually the same venue as yesterday’s platform launch, although the two events were organized by the same group. As noted earlier, Dion is at the Royal York; Harper’s platform launch was at the Sheraton.