Support for a minority government—now the likely outcome—is at 40 per cent, with some voters in every party hoping there's no majority 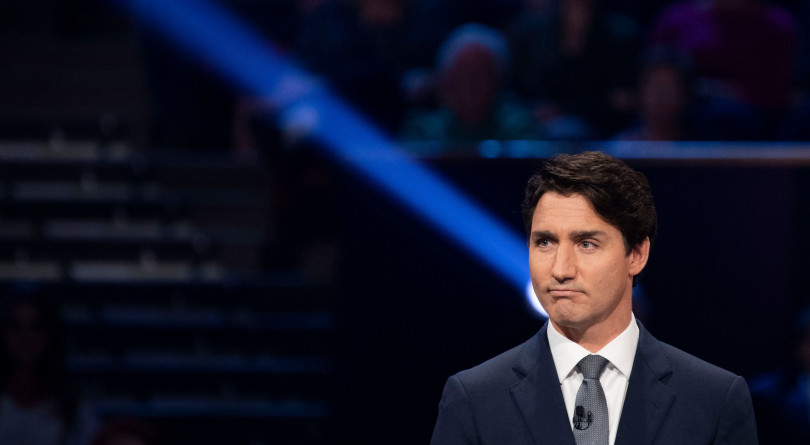 Trudeau at the French language debate in Gatineau, Que., on Oct. 10, 2019. (ADRIAN WYLD/POOL/AFP via Getty Images)

Even Liberal supporters aren’t all completely sold that they want Justin Trudeau to win a second majority government.

“There are some voters within the base of every party that would be happy to see their party have a minority because they’re not completely sold on everything their party wants to do—which I think is healthy,” says Greg Lyle, the president of Innovative Research. “Leaders don’t get a blank cheque, even from their own people.”

“That worked out really well for him,” says Lyle. “The fear from people that he’s trying to convince to vote for him was that somehow voting NDP would enable the Conservatives. He had to take that off the table.”

Green Party leader Elizabeth May’s willingness to work with any party in a minority government has shown mixed approval among voters. On the one hand, eight per cent of Canadians said May’s openness to work with either Conservatives or Liberals—provided the party in power agrees to specific Green Party policy proposals—makes them “much more likely” to vote Green, but 14 per cent of Canadians said May’s stance made them “much less likely” to vote Green.

Based on current polling data, a minority government appears the most likely scenario for Canada’s next government, though which party has the most seats is still very much a coin flip. There’s a less than 20 per cent chance either Liberals or Conservatives manage to pull off a majority mandate (170 seats or more), according to 338Canada’s latest projection, with both parties currently projected to win 132 seats in Parliament.

On top of not being eager to reward any party with a majority, 41 per cent of Canadians also say this election is more negative than past elections, according to another Innovative Research report. This holds true across party lines. Looking at party leaders, Trudeau, Andrew Scheer and Max Bernier are all seen as having been more negative than positive in this campaign. Singh leads the way as most net positive, followed by the Bloc’s Yves-François Blanchet and the Green’s Elizabeth May.

The poll results are based on the results on an online survey of a representative sample of 2,486 Canadians, but because of the methodology, a margin of error does not apply.