'If you win Ontario you win the whole enchilada,' one pollster said. And then the Liberals did. 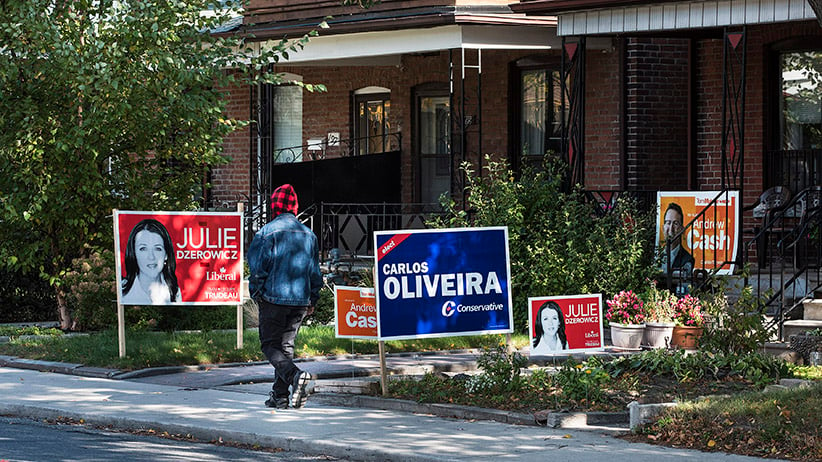 Campaign signs are seen on lawns in the Toronto riding of Davenport on Canada’s federal election day on Monday, Oct. 19, 2015. (Aaron Vincent Elkaim/CP)

It was easy to believe the centre had shifted. We’d gone from the West wanting in to the Conservatives wanting it all, and, by 2011—after three hard-fought federal elections—the Tories had achieved their goal. Stephen Harper’s “strong, stable majority” was a dream come to pass for Western conservatives. Commons benches overflowed with Tories. Westerners stood at the heart of the nation’s power structure. A family of Calgarians was making itself at home at 24 Sussex.

More gratifying for them still: Ontario had finally shucked off Liberal Party hegemony, sending 73 Conservatives to Ottawa, including a handful from the centre-left redoubt of metropolitan Toronto. After decades of dismissal and ridicule by central Canadian pundits (moderate or lose!), these harder-edged Tories had sold their tax-cutting, family-values platform to the very towns, suburbs, synagogues and mosques that carried the Grits to power for so long.

You could forgive them for thinking they’d slain a beast. But it turns out the beast was merely slumbering. As the national TV election specials wound down Monday night, all of the ground the Harper Conservatives won in Ontario four years ago was lost and, with it, their grip on power. The Liberals were leading or had won 80 of the province’s 121 seats, versus 33 for the Conservatives and eight for the NDP. In the popular vote, the Liberals mopped up their rivals, winning 44.8 per cent and knocking out heavyweight opponents like Joe Oliver, Harper’s finance minister, and NDP mainstay Peggy Nash.

So the Tories lost Battleground Ontario. But to a degree, the Liberals also won it.

When Trudeau won the Liberal leadership in April 2013, a scan of the political landscape made clear his only viable path to power went through Canada’s most populous province. This is arguably true for every national party, but more so for the Grits. Stripped of credibility and deprived of its electoral machine in Quebec, the party’s power base had shrunk to a dozen ridings in Atlantic Canada and an even smaller number in Ontario. Assuming it wasn’t about to scoop the Tories in B.C., where they’d gotten just 13.4 per cent of the vote in 2011, or paint the Prairies red, a recovery in the English Canadian centre still represented its best hope of a Liberal revival.

The good news was that the party was still on the electoral radar, pulling 25 per cent of the provincial vote in the 2011 federal election and faring well in subsequent polls. The challenge was to rebuild the infrastructure that wins elections and, for that task, Trudeau tabbed a young man with a score to settle. Navdeep Bains, now 38, had twice won for the Liberals in the key GTA riding of Mississauga–Brampton, only to fall to the Conservative wave in 2011. Bains, who won back a seat Monday in Mississauga-Malton, went to work almost immediately, wooing fundraisers, recruiting candidates and setting up nomination meetings. “We focused on populating our voter database, so we could really target voters and focus our message,” says Bains, who became co-chair of the Liberal campaign in Ontario, “rather than just assuming people would vote for us because we’re Liberals. We had to earn it.”

They got voters’ attention, he says, with the sort of micro-targeted messaging the Conservatives once deployed to great effect—specifically, Trudeau’s proposal for a middle-class income-tax cut, coupled with a hike on the top one per cent of earners. But over the course of the campaign, their canvassing turned up a deeper dissatisfaction with the Harper government, which they quickly seized on. “People really wanted change,” he says. “They just didn’t know who that agent of change would be.”

That Trudeau’s loose, upbeat personality would provide a foil to the stiff, admonishing Harper was easy to predict. More surprising was the success in Ontario of Trudeau’s riskiest policy plank, namely, his promise to run deficits as high as $10 billion per year, while plowing $145 billion in new spending into the economy during the Liberals’ first mandate. The Conservatives pounced, warning that Trudeau would drive the government into deeper debt and the economy into stagnation. But in Ontario, the plan might actually have served Trudeau well.

Far from scaring off economy-obsessed voters, says pollster Shachi Kurl of the Angus Reid Institute, it fed into Trudeau’s narrative about the need for change. When Angus Reid polled on the question in mid-September, 46 per cent of Ontario respondents gave the Conservatives highest marks for their economic plan. But considerably more, 54 per cent, said Trudeau and the Liberals best represent their values, and would deliver the change they were looking for.

It was testimony to how poorly the Tories’ attacks and overheated warnings were playing in the province by the end of the campaign, says Kurl. What’s more, the NDP had virtually ceded the field in Ontario, meaning the Conservatives couldn’t count on them to split the progressive vote, as the Tories hoped when the campaign started. Over the course of the race, New Democrat Leader Tom Mulcair spent only 19 days—or 17 per cent of his campaign time—in a province with 36 per cent of the seats. By comparison, Trudeau hit Ontario on 32 separate days. Harper went there on 36 days.

The effect was to send the province rushing back to the embrace of the Liberals. The signs of disaster were clear enough by the final week of the campaign that Harper took the extreme measure of campaigning with Rob and Doug Ford. He made the move just as new revelations about the former mayor emerged in a book excerpt published by Maclean’s. The critics will point to Harper’s play as a mistake. No one wants to vote for a patently desperate party.

But the Tories can count as well as anyone and, to salvage their caucus, they knew they’d need an Ontario resurrection as surely as Trudeau needed it in the spring of 2013. It’s the province with the most votes, and the most seats in the Commons. It was the obvious site for a last-ditch, high-risk gambit, because, as the pollster Kurl puts it: “If you win Ontario, you win the whole enchilada.” Today, Liberals in Ontario are no doubt savouring every bite.