Inside the Canadian establishment's fight with Trudeau over China 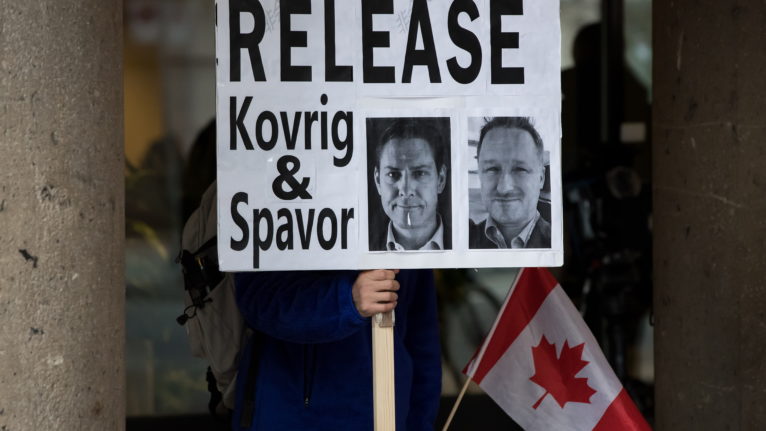 A man holds a sign bearing photographs of Kovrig and Spavor outside B.C. Supreme Court where Meng was attending a hearing in Vancouver on Jan. 21, 2020 (CP/Darryl Dyck)

Speaking with uncharacteristic clarity and force, Prime Minister Justin Trudeau on Thursday flatly rejected growing pressure on his government to arrange the release of Huawei executive Meng Wanzhou in hopes of securing the release of Canadians Michael Spavor and Michael Kovrig, currently jailed in China.

“If the Chinese government concludes that [detaining Spavor and Kovrig] is an effective way to gain leverage over Canadians and over the Canadian government, to randomly arrest Canadians, then no Canadian will be safe,” Trudeau said. Any regime anywhere would be likelier to start arresting “random Canadians” to press diplomatic goals, he said.

“To demonstrate to China that they can just arrest Canadians and they can get what they want out of Canada—even for us going against the independence of our judicial system—would be absolutely unacceptable.”

Trudeau’s remarks followed three astonishing days during which a growing list of prominent Canadians, from Kovrig’s wife to legal experts to three former foreign-affairs ministers, urged Trudeau to have Justice Minister David Lametti use his lawful authority to end Meng’s extradition process—thus trading her liberty for that of Kovrig and Spavor.

The full-court press to organize what would have amounted to a prisoner exchange, and the Prime Minister’s forceful denial, illustrate a growing rift between Trudeau and an amorphous, superbly-connected Canadian establishment that usually expects Liberal prime ministers to follow its advice.

The week’s events began on Monday, when Kovrig’s wife Vina Nadjibulla told the CBC the government wasn’t doing enough to free her husband, who has been detained in harsh conditions since December 2018. Significantly, Nadjibulla called on Trudeau, not merely to keep up diplomatic pressure, but to have Lametti halt Meng’s extradition to the United States on charges of bank fraud, wire fraud and conspiracy to commit bank and wire fraud. “The minister of justice can act,” she said.

But the campaign took off on Wednesday with the publication of a letter to Trudeau signed by 19 former politicians, diplomats and an ex-journalist and making the same argument Nadjibulla, Greenspan, Arbour and Rock had made. The letter was signed by prominent former Liberals, Conservatives New Democrats and non-partisans. Signatories included former foreign ministers André Ouellet and Lloyd Axworthy, both Liberals who worked under Jean Chrétien, and Lawrence Cannon, a Conservative in Stephen Harper’s government. The list also included longtime NDP leader Ed Broadbent, several former foreign-policy advisors to Chrétien, former Quebec premier Jean Charest, and the retired veteran CBC journalist Don Newman.

Nobody who signed the letter would have been out of place in the dining room of the Rideau Club, the exclusive Ottawa social club where Chrétien is a lunchtime regular. People from such genteel precincts rarely line up against a Liberal prime minister on a sensitive diplomatic controversy. That these luminaries chose to do so is an indication of the stakes. Kovrig and Spavor have been jailed in cells where the lights never go off for a year and a half. There is no end to their captivity in sight, and on June 19 the two were formally charged with spying. China-Canada diplomacy on other files has essentially ground to a halt. But the Trudeau government is also reluctant to antagonize China on any file for fear conflict would endanger the two Canadian prisoners.

A source familiar with the letter told Maclean’s that in November 2019 several prominent Canadians, including Rock and former Conservative Foreign Minister John Baird, travelled to China for meetings with Chinese officials. During informal discussions on the sidelines, the visiting Canadians were given to understand that if Meng were released for any reason, the two Michaels would also promptly be freed.

In January, Canada’s ambassador to China Dominic Barton asked Arbour and Rock to “brainstorm” on possible political and legal solutions. Barton has taken the detention of Spavor and Kovrig extremely seriously, undertaking consular visits to them personally, when permitted, instead of sending more junior embassy officials.

In February Arbour and Rock sent Barton a memo outlining options for breaking the deadlock. It repeated an argument several proponents of a more conciliatory approach, including Jean Chrétien, had made for months: that Lametti, in his capacity as justice minister, has discretion to end extradition proceedings, and could thus arrange the prompt liberation of Meng and the two Michaels. Barton sent the memo up the line to senior Trudeau government officials, with no apparent effect.

The February memo from Arbour and Rock is also said to have made a second proposal: that Canada re-establish diplomatic relations with Iran, suspended since 2012, to smooth the investigation into January’s destruction, by Iranian air defence, of an airliner with dozens of Canadian passengers. Rock and Arbour decided that argument was a dead letter because it would detract from the Meng case, which is intimately tied up with U.S. sanctions against Iran. A later version of their memo, sent in confidence to the Trudeau government on May 22 along with Toronto lawyer Brian Greenspan’s legal opinion, devoted less space to arguing for a new diplomatic relationship with Iran.

The May 22 letter and legal opinion, like previous efforts, seemed to have no effect on Trudeau’s determination to let Meng’s extradition proceed. Five days later a B.C. judge ordered the extradition to proceed. On June 19, in apparent retaliation, China laid charges against Kovrig and Spavor.

That’s when Vina Nadjibulla decided she’d had enough. She gave the CBC her interview on the same day Rock and Arbour gave the Globe the Greenspan memo. Sources say Edward Greenspon, president and CEO of the Public Policy Forum think tank and a former Globe editor-in-chief, made the introduction between Nadjibulla and Globe journalists.

Discussions on the open letter with 19 signatories had been underway for two weeks. Rock was one of a handful of signatories who led the drafting effort. Kovrig had worked at Canada’s United Nations delegation in New York between 2003 and 2006, when Rock was the UN ambassador. Some people who were approached to sign the letter declined for various reasons, including John Baird, who generally prefers not to take positions on public controversies since leaving politics. Living former prime ministers, including Brian Mulroney, Chrétien and Joe Clark, were not approached. The letter was meant to be private, a source said, lamenting that it “looks like a stunt” now that it’s public.

One of the signatories, Chrétien-era foreign minister Lloyd Axworthy, remained convinced after Trudeau’s remarks that the Prime Minister should not rule out a Meng-Michaels exchange. “He’s talking about millions of Canadians put in jeopardy” by a prisoner exchange, Axworthy said. “That’s just not the case.”

“I mean I went through, I suspect, more hostage cases than the Prime Minister has. And I think that what needs to be demonstrated is that Canada is prepared to look at all of the options that can be workable for them, for their release, for their liberation, for their freedom. And I think that is the message that we want to get out—that Canada is behind people who were unlawfully arrested or detained. Not that we’re just kind of prepared to say we’re disappointed in things.”

Stephanie Carvin, an assistant professor of international relations at Carleton University, said Kovrig’s “fairly well-networked family” is understandably using every available means to secure his release. “If it were me, I’d be drawing on every connection I have.”

But Carvin said she “vehemently disagrees” with the open letter. “It does send a diplomatic signal” of strong domestic disapproval within Canada for Trudeau’s policy of allowing the Meng extradition to proceed. That makes other countries wonder what Canada’s real policy is, or whether it will last, Carvin said.

That’s problematic because a key element of Trudeau’s attempt to get Kovrig and Spavor freed has been lining up support from other governments. “We are asking [foreign] diplomats to speak out about this,” Carvin said. Those diplomats need to know they can depend on Trudeau’s policy to remain consistent.

“Our allies are looking at this and wondering what this actually means. This is why it was so important for Trudeau to clarify the Canadian government’s position immediately.”

—with Nick Taylor-Vaisey and Jason Markusoff