Inside the most insider campaign function: Election debate prep 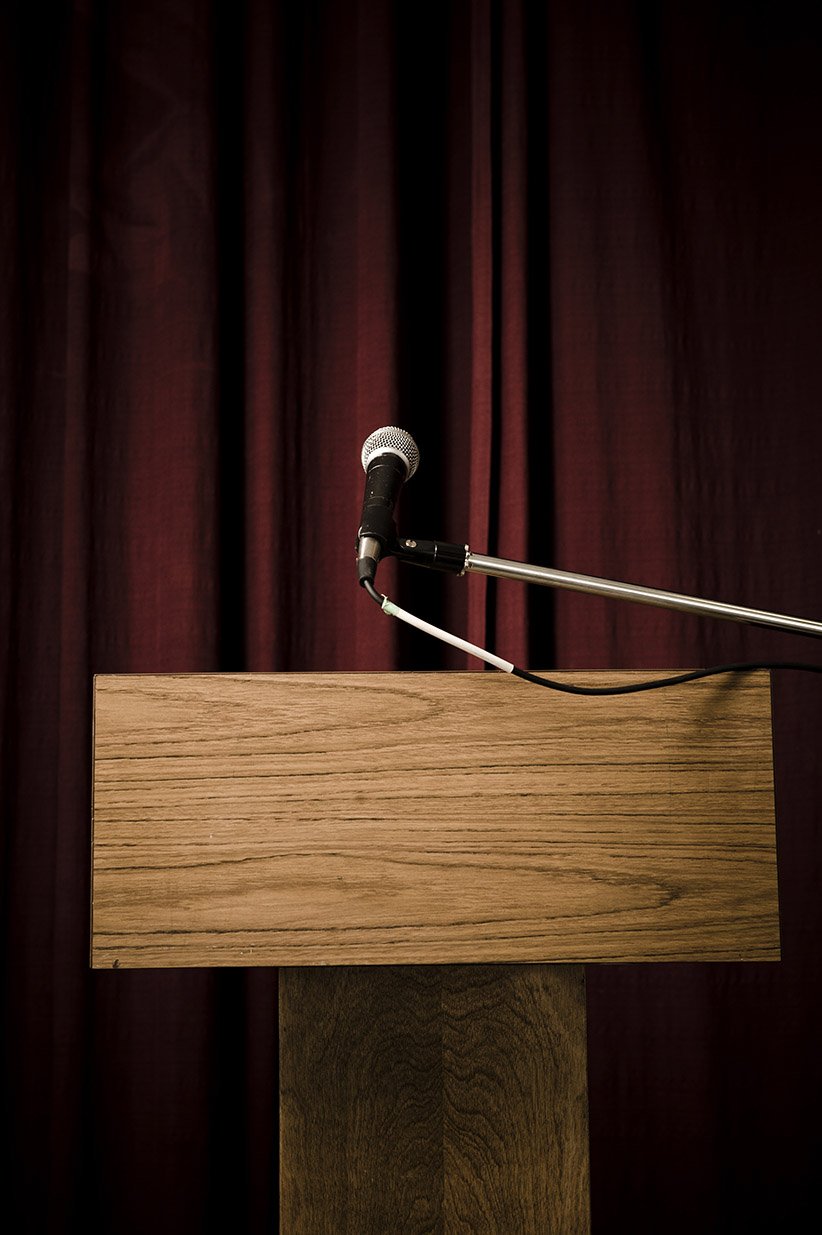 It’s April 2004 and the prime minister of Canada is swearing at me.

He says his judos haven’t been updated–and he’s right. I gave him the wrong batch. Now, just as we’re set to begin a mock debate, we have to tear apart his prep book. As I up-end his binder, indecipherable notes he has scrawled to himself—one-liners, stage directions and Lovecraftian symbols—fall everywhere. He grows more agitated.

At this point, stand-ins for the other party leaders, against whom the prime minister will soon spar, attempt to distract from my misery. “Watch that Layton doesn’t draw you into a ﬁght,” or, “Harper avoids eye contact.” Somebody mutters something about forehead makeup.

Sweeping together his reassembled notes, I hand things over with an apology. He concentrates intensely on the new pages, takes out a felt pen and circles two suggested passages. “These are good,” he smiles. Debate prep is back on track.

The most insider of all insider campaign functions, debate prep is always conducted behind closed doors. It requires advisers to speak truth to power, produce staggering amounts of work product, and coach delicate egos toward a precise blend of conﬁdent but not cocksure, prepared but not uptight. Although details vary to suit the personal style of each leader, the core elements of debate prep are relatively ﬁxed. Any competent effort will involve at least these ﬁve components.

1. Team. Just like Ocean’s Eleven, debate prep should rely on a hand-picked crew of specialists—writers able to translate policy into politics (and politics into what should sound like principle), the rules police who negotiate format and, of course, those expert in presentation. Most important, the group must be composed of people the leader can trust completely, featuring a blend of established aides and discreet outsiders. This mix brings fresh perspectives, and limits the risk of creating an echo chamber of conventional thinking.

2. Sundays. Typically, a weekly prep session will be held with the leader. It’s often on Sundays, because these tend to be unscheduled or “down” days. Initially, these meetings will occur around a boardroom table and focus on strategic imperatives, key issues, unpleasant vulnerabilities and draft debate cards. These meetings bond the team to the leader, force accountability and allow inevitable points of difference to be reconciled.

3. Book. The leader’s book is the holy bible of debate prep. Its foundation is a catalogue of debate cards, two-pagers for each main issue, sorted by category. For example, Tab 1 might be economics and the ﬁrst card could be jobs. The cover page showcases only a few bullets: several goals, some key stats, a potential zinger. Page 2 is the “run”–or suggested talking points.

The run is highly structured, always beginning with a values statement such as, “Well-paying jobs are the cornerstone of middle-class success.” Then comes the challenge, “The problem we face is . . . ” Next comes the goal: “That’s why we’re dedicated to. . . ” Then a plan: “We’ll take action in four ways. . . ” It ends with either a reprise of values (“Nothing will take a higher priority”) or an attack (“What voters want to know is why you. . . ”). You will hear this structure repeated endlessly.

Three more inserts complete the book: a sheet of “hot quotes” featuring embarrassing statements by other leaders, brieﬁng notes on key policies, and a bunch of judos. Nicknamed after the martial art that seeks to reverse an opponent’s attack, judos are quick hits intended to blunt an assault—“Mr Harper, you’re the only economist in Canada who doesn’t think we’re in recession”—and turn it around: “I’m the only leader here who won’t plunge Canada into a jobs-killing deﬁcit.” Used effectively, judos can create memorable exchanges. Think of Jack Layton hammering Michael Ignatieff’s attendance record in 2011.

Related: Why the Maclean’s debate matters

4. Strategy. Two philosophies dominate contemporary debate strategies; call them Tyson and Foreman. The Tyson unleashes violent punches hoping to capture the television/YouTube/Twitter clip that will dominate post-debate coverage. Brian Mulroney’s “You had an option, sir” against John Turner is the gold standard. By contrast, the Foreman technique treats debates like an infomercial. Rather than exchanging blows, the goal is to pitch your message directly to target voters. Harper is a skilled Foremanist.

Other strategic decisions are also required. Which leaders do you seek to tangle with? Which should be ducked? Which topics are kryptonite? Do you have a go-to line if you get tagged hard? All these considerations will be gamed out in advance.

5. Mocks. The most delicate aspect of debate prep is the mock, or mock debates. Rehearsals are held in a studio with cameras, backdrops and podiums patterned on the real event. To ensure the leader’s ease, the team should be kept to a bare minimum, while the leader is coached on topics such as how to stand, where to look, what to do with his or her hands and why that tie (or necklace) sucks. Same goes for delivery. Is the leader speaking too fast? Landing her best lines? Too practised? Not practised enough? And remember, it’s a process of constant critique. It can wear on people. The wise debate-whisperer will shrewdly balance correction with encouragement to nurture the best from his leader.

Drawing on MPs and trusted colleagues, surrogates will be recruited for the mocks. Their job is to closely mimic the habits of the other party leaders, usually supported by their own research teams. In rehearsal, the stand-ins must press, but not punish the leader. The goal is to improve performance, not beat up the boss.

A full mock can last up to two hours, but the most productive approach is to work in 20-minute chunks, with breaks for review and discussion. After months of book learning, leaders are usually astonished at how the mocks unfold. It can take a while to master the format’s unique rhythms. But, by breaking down tape and remaining open to advice, leaders can use the mocks to build toward a poised and natural performance.

Back in 2004, we’ve hit another snag: The rules police just called to say that organizers want to change the topics. God help me. We’re going to have to rebuild the book.

Scott Reid is a CTV politics analyst, was an adviser to former prime minister Paul Martin, and has helped prepare many party leaders for debates. He and Maclean’s columnist Scott Feschuk are partners in the communications firm, Feschuk.Reid. Read Scott Feschuk’s satirical piece on how to prep for the debate here.