Inside the parliamentary all-nighter that approved billions in emergency spending

The Conservatives were ready to revolt. The NDP was frustrated. How hours of behind-the-scenes calls diffused an ill-timed brawl on Parliament Hill. 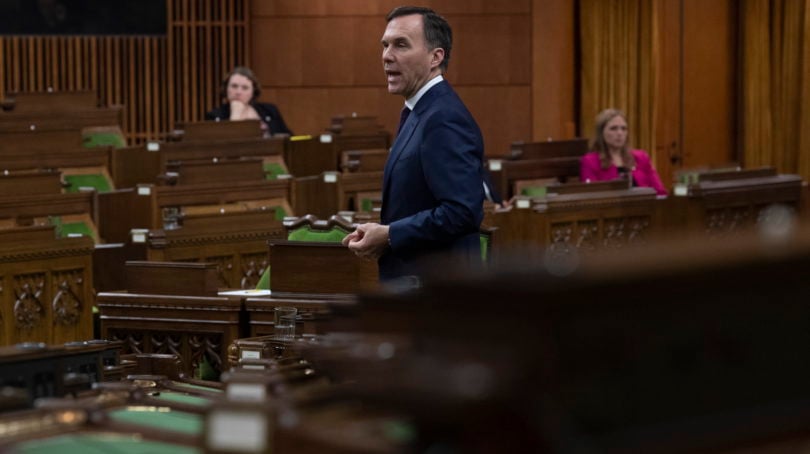 Minister of Finance Bill Morneau responds to a question in the House of Commons on March 25, 2020 in Ottawa. (Adrian Wyld/CP)

On a Monday night in March, hours before a House of Commons debate the next day on an emergency federal aid package for unemployed Canadians and shuttered businesses, both the Globe and Mail and Global News reported on a leaked draft of the bill.

Both stories zeroed in on a section of the legislation that would allow the Liberal government to hike taxes, without parliamentary approval, until the end of 2021.

“When that happened, we had a revolt,” says Pierre Poilievre, the Conservative finance critic. “All of the Conservative MPs in Canada would have come to Parliament with pitchforks in hand to storm the place and vote the bill down, whether the leadership wanted them to or not. Our phones just exploded.”

Five days earlier, when Prime Minister Justin Trudeau had announced a $27-billion package for workers and a $55-billion lifeline to businesses, every party pledged support for the measures. The next Tuesday, March 24, a skeleton crew of MPs took their seats in the Commons ready to rush through a bill that would send more money to parents, sick and unemployed workers, and unlock billions in credit for businesses whose revenue was drying up because of the pandemic.

In a process that would normally take months and involve several departments, C-13 was drafted in “real time,” said a senior government official aware of the negotiations that followed. All told: just five days had passed. On the Sunday afternoon before the sitting, the government circulated a draft bill to the NDP, Liberals and Bloc Québécois—an “unusual” step meant in good faith, says one government source.

“We thought the bill was going to be uneventful,” says Poilievre. “We had publicly announced our support for the assistance measures the government had announced. We assumed their officials had converted that into legislation and that we would give it a quick once over and approve it.” Poilievre hadn’t even opened an email with the draft bill attached before about 10 p.m. that Sunday, when a policy advisor in Tory leader Andrew Scheer’s office raised the alarm. “He said, ‘You’ve really gotta open that bill.’ ”

And so—like Canada needed any more drama during this crisis—a political war few Canadians had patience for seemed ready to erupt. What followed, according to key members from each party, was a desperate scramble to defuse the brawl and save the bill.

The Tories’ biggest immediate problem was with the second section of the bill that spelled out unprecedented tax powers. But they spotted other problems. “We went down deeper into the bill, and we saw there were similar spending and borrowing powers that were ill-defined and unlimited,” says Poilievre.

The party reached out to Finance Minister Bill Morneau’s office, but couldn’t get a hold of anyone until the next day.

Rachel Blaney, the NDP’s whip, also saw the draft that Sunday. It raised her eyebrows, too. “One of the commitments that we asked for, all the opposition parties, was please don’t surprise us,” she says. “We know the issues are urgent, we know we don’t have a lot of time, and we want to get resources out to families, to businesses, to communities and to provinces and territories as quickly as we can.”

“The biggest frustration for me, and I understand they were trying to be responsive, but we were surprised with that bill.”

On the Monday morning, Poilievre joined Ian Brodie, a former Stephen Harper chief of staff now working in Scheer’s office, with several other Tories in a meeting with Morneau’s staff. Poilievre, who only joined by phone because he was in self-isolation awaiting coronavirus test results, felt talks got nowhere.

That afternoon, he spoke with Morneau himself. “I reiterated that we simply could not support the bill as long as it furnished these powers to his government,” he says. “He didn’t take the cue that I was giving him the ability to avoid the controversy altogether.”

The same day, both the government and the opposition sought the opinion of Yves Giroux, the parliamentary budget officer. Poilievre says the Tories were wondering if they’d misread something. “We briefly entertained the possibility that the bill perhaps wasn’t as bad in reality as it read in language,” he says. “But the parliamentary budget officer quickly disabused us of that.”

Giroux tells Maclean’s that his office’s role as legislative interpreter was “unusual,” since his typical analysis sticks to the financial or economic impact of government proposals. Giroux’s view was that the government was seeking “unprecedented powers,” and he communicated that opinion to all four opposition parties.

Blaney, along with party staffer Blake Evans, also met with Morneau’s staff on Monday for a long round of negotiations with broadly the same concerns as the Tories.

The senior government official, who admits the opposition’s concerns were legitimate, said the Liberals weren’t attempting to subvert the supremacy of Parliament. “We’re not trying to hoodwink you,” said the official. “We’re trying to anticipate a whole variety of potential scenarios and we want to make sure that we’re in a position to respond expeditiously if we need to.”

By the end of Monday night, as the Globe and Global News bombshells spread like wildfire, the Liberals agreed to drop the contentious second section of the bill. The opposition had more demands, however—and, said Blaney, “it was clear we weren’t going to get there” on Monday.

The New Democrats’ and Tories’ remaining list of grievances were nearly identical. They both said the eighth section of the bill, which granted the finance minister the power to borrow and spend money on the same timelines as the axed second section, had to go. Conservatives also had their eye on the third section, which allowed the government to spend unlimited amounts of money “in relation to public health events of national concern.” Both opposition parties also wanted two parliamentary committees, health and finance, to meet on a regular basis—and give the finance committee the right to recall Parliament.

By that point, the Bloc Québécois—which had also opposed the proposed tax powers—had agreed to support the government. Gabriel Ste-Marie, the only Bloc MP in the House for the final vote, said his party supported the eighth section in the interest of allowing the government to respond quickly to the pandemic.

Ste-Marie also says the Tories were “mostly playing partisan politics” at that point. The concessions they sought were relatively marginal, he said, compared to the version of the bill supported by the Bloc.

Blaney, who soldiered on in negotiations, gave the government credit for starting to listen to the opposition. “I’ll say this for all parties. Everybody had a sense of the urgency of this. That Canadians didn’t want to see us in Parliament arguing with one another,” she says.

Tuesday morning brought more phone calls, and eventually meetings between opposition negotiators, Morneau and officials from several departments. The senior government source described those as “very constructive conversations.” Neither Poilievre nor Blaney would disclose the details of what Morneau told them that day, but Blaney says it was “helpful to all of us”—and identified that moment as when everyone in the room “pinpointed the key issues” for New Democrats.

That afternoon, the NDP and Tories (but not the Bloc) got on a conference call with the government that combed through the bill and identified remaining areas of disagreement. The Liberals took copious notes and agreed to have lawyers redraft the bill, which they would circulate as soon as possible. 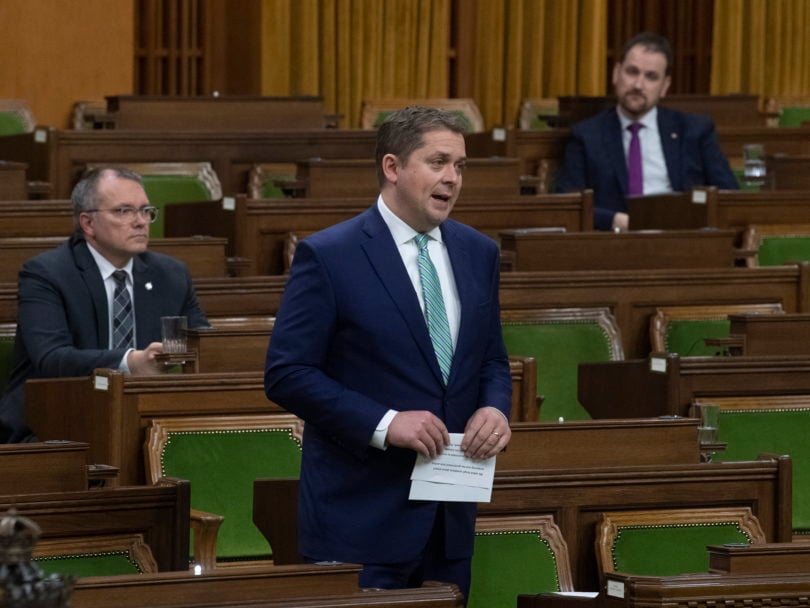 Leader of the Opposition Andrew Scheer rises to question the government on its financial response to COVID-19 in the House of Commons on March 25, 2020 in Ottawa. (Adrian Wyld/CP)

The opposition parties grew restless, twice suspending the day’s parliamentary sitting to allow more time to negotiate, and then twiddling their thumbs as they waited for a revised bill. At one point when the Commons was nearly empty, Scheer ambled over to Foreign Minister François-Philippe Champagne, who was sitting in his seat on the front bench. They politely haggled over the details of the impasse before eventually parting ways.

The senior government official says there’s no mystery to the delay. “Even if we agree to a change on language,” the source said, “it takes drafters five hours to review all that stuff.” After midnight, the Tories and NDP finally laid their eyes on the new language. “We pored over it for 35 or 40 minutes and then we agreed to head down to the House of Commons,” says Poilievre.

The government had caved on key opposition demands: they only had power to borrow and spend until Sept. 30 of this year, not the end of December 2021. And both the health and finance committees would meet regularly with the power to recall the House.

Whenever the House assembles for a vote, bells ring throughout West Block. They rang uncharacteristically early that Wednesday morning, as MPs filed in to debate the newly redrafted C-13. At 2:36 a.m., Rodriguez tweeted that MPs were “headed back to the House.”

Tory leader Andrew Scheer put out a statement at 3:32 a.m. confirming the Liberals had agreed to sunset clauses on most spending powers and parliamentary oversight. Along the way, Morneau revealed two family members tested positive for the coronavirus. Conservative House Leader Candice Bergen admitted that for any government, the pandemic would be a “heavy load to bear.” Ste-Marie, the Bloc MP, celebrated his 40th birthday as his colleagues rushed through debate.

At 5:52 a.m., the House passed C-13. The calendar in the chamber still read March 24, a procedural quirk of the House, which can’t move on to the next day until the previous day’s sitting is adjourned.