'I think we're going to show people who we are, our generosity of spirit, what we're capable of' 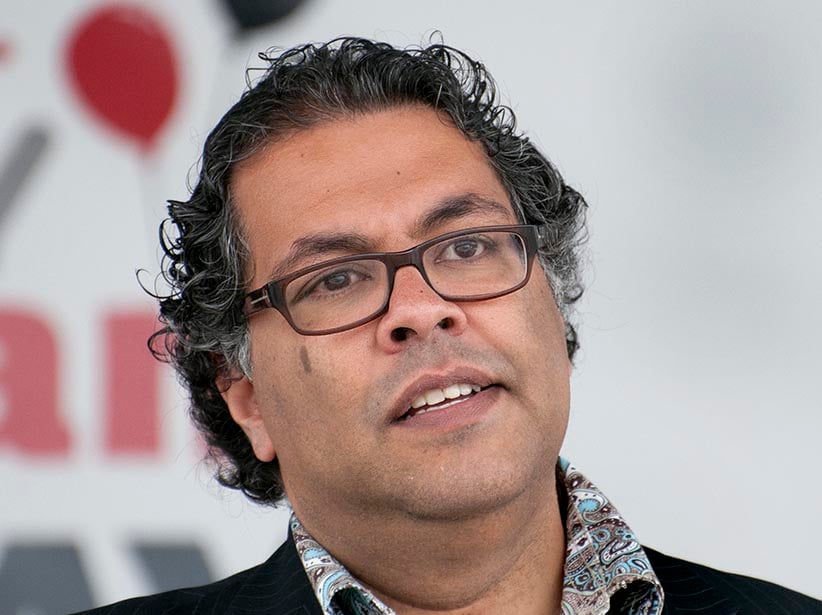 Calgary Mayor Naheed Nenshi, the first Muslim to lead a Canadian city, stepped forward during this year’s federal election campaign to criticize the Conservative party’s policies on citizenship, the niqab and Syrian refugees and in recent days he has addressed both the Liberal government’s goal of welcoming 25,000 Syrian refugees and a recent string of anti-Muslim attacks in Canada. I spoke with him by phone last night.

In another interview, you said, “I think the way we manage ourselves over the next several months will really be defining for us as a nation.” First of all, what specifically did you mean by that—what about the next few months is going to be determinative?

What I specifically mean is, how we welcome the refugees that arrive. And let’s set ourselves apart from the debate on how many are coming or when they’re coming. We know people are coming. We’re going to have a whole bunch of new Canadians and we’re going to have probably more than a thousand new Calgarians. And we have to make sure that when they get here, we give them every possible fair shake they can have to live a great life here. And so, I’m just going to be super sentimental for a moment if you don’t mind. We’ve been working with non-profit organizations and others on just bringing people together to do whatever we can do. One of the things we’ve been doing is—for better or for worse we actually have a higher apartment vacancy rate in Calgary than we’ve been used to for many years. So we’ve been talking to a lot of landlords and saying, can you make your place available? Whether it’s somebody with a basement suite or a very large landlord with hundreds of units, people have really been coming to the table, offering rental discounts, leases and so on. It’s really been quite extraordinary. I had one big evangelical church, earlier this year, even before this all became a bigger drama during the election, say to me that they were planning on just renting two apartments always so that if refugee families came and they were sponsoring them they would always have somewhere they could stay. So this is great, but today one of the larger landlords in Calgary, a company called Strategic, the guy is named Riaz Mamdani, gave a very odd interview. He just said, we’re making units available. The reporter said to him, what’s your budget, how long are you going to make them available for? He basically said, I don’t know, if people can’t afford to pay, they can’t afford to pay, we’ll just make it work. This is one of the wealthiest people in Calgary, you know? Of course, he himself came to Canada as a refugee from Uganda. And so that’s why he’s saying, it doesn’t matter, we’ll just make it work. So that’s really special.

But today I had a meeting this morning where we had a community forum on refugees. And I was a little bit nervous walking in because it was an open invitation, anybody could come, and I thought there might be some angry people or people with a lot of very difficult questions. And who was there were churches and synagogues and temples and mosques and grandmothers and volunteers and people from across the community, who were just asking the same question, which is by the way still by far the most common question I get, how can I help? And at one point a First Nations woman stood up. I only knew that because she said, I am a First Nations woman. I thought she was going to say, why are we having all this focus on these refugees when we have so many problems closer to home? And what she actually said was, I need some help. Because I need to understand how and when they’re coming because I want to make sure, and many of my First Nations colleagues, want to make sure that when these people come, we have an opportunity to have the elders there to drum them in and to do a smudge ceremony so we can welcome them to this land. I might have lost it at that point.

For all that though, how much do you worry—I don’t want to overstate things or sensationalize things, but there are these incidents, incidents is putting it mildly, of violence, of harassment. there’s another one just out of Toronto now about two women being harassed. How much does that worry you? How much concern do you put on those things?

So that’s the optimistic side. The less optimistic side is, like every Canadian, I’m deeply shaken by these recent incidents. By what happened in Peterborough, by some of the incidents we’re hearing in Toronto. Where was this latest one, Aaron?

Toronto, on the TTC.

This is Toronto. The most multicultural city in the world. This is the city that my parents came to in 1971 when there five other Ismaili families, and tried to make a life out of it. It’s not who we are. It’s not who that great city is. I think it’s really, really important, not just for politicians to denounce this stuff, not just for the police to take this stuff seriously, that is all true, but it’s the time for good and decent Canadians, which is the vast, vast majority of Canadians, to put a line in the sand. When you hear that kind of talk, whether it’s across the fence with your neighbour or at the grocery store or on the bus or on social media, it’s time for all of us to say, you know what? It’s not acceptable, it’s not who we are as a people and that kind of careless talk, a straight line can be drawn between that kind of careless talk and these kind of horrific incidents. These horrific incidents, I think every Canadian would agree, do not reflect who we are as a nation.

It’s interesting that you parse the question that way because I did want to ask you whether you were at all worried about refugees coming in and whether all it’ll take is one or two bad incidents and that could feed more fear and more concern. But the other part of that is, Rona Ambrose made the comment yesterday that the federal government should be as transparent and clear as possible right now and that they may take away some of the fear. Do you worry at all that the government, in not coming out with its plan right now, right away, and being as open as possible—

No, only because I am privy to some things that not everyone is privy to. Don’t make it sound like I know what’s going on, because I don’t, quite. I can say that I have had conversations with the federal government and with the provincial government and I know there’s a lot of moving parts and they just want to be very clear when they announce stuff. But I also know that the people in Citizenship and Immigration Canada, they actually know what they’re doing. There’s a reason we’ve been one of the great, great countries for accepting refugees for decades, because those public servants actually do know what they’re doing, in terms of security, in terms of screening, and everything else. And I agree with Ms. Ambrose, I believe in tonnes of transparency, that’s how I run my life and my governance, but I’m also willing to give the federal government the benefit of the doubt that they just want to make sure that the i’s are dotted and the t’s are crossed. But I’m confident that they will soon announce their plan and that their plan is thoughtful and they are looking at security in a very, very serious way, but also at expediting the process as quickly as possible.