Interview: Speaker Geoff Regan on maintaining order in the House

Geoff Regan, the newly elected Speaker of the House of Commons, talks about his new role and his hopes for maintaining a new tone in Parliament 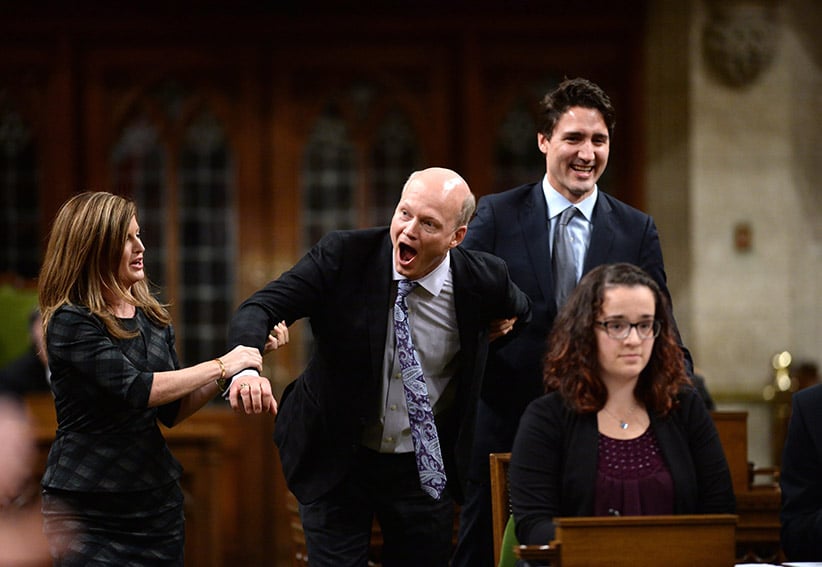 Geoff Regan, the Liberal MP for Halifax West, was elected by his fellow MPs last week to serve as Speaker of the House of Commons, the 36th person to hold that position since Confederation. I spoke with him this morning in his new office about his new role and his hopes for maintaining a new tone in Parliament.

Q: When did the idea first occur to you to run for Speaker? Had you been thinking about this for a long time or did this come up recently?

A: I had had an interest in procedure for a long time. I had a professor at St. Francis Xavier, whose name was Dr. John Stewart, who was an expert in Canadian parliamentary procedure and, in fact, he’d been a member of Parliament in the late 1950s. And a little while after I had him as my professor he became a senator and was well known in the Senate for his expertise on procedure. So we heard a bit about it in our classes with him at St. FX, so that gave me some interest. And then as a member of Parliament I took a little more interest and I was made the parliamentary secretary to the government House leader back in 2001, with Don Boudria, so at that point I had of course to learn more about all the procedures and the rules.

After the election, at some point, some of my colleagues said, look, you ought to think about maybe running for Speaker. I hadn’t given that a whole lot of thought. But the more I thought about it, the more I liked the idea of the challenge involved, especially at a time when we’ve heard a lot from Canadians about the way that they’d like to see the tone of the House of Commons change, they’d like to see more decorum and a more respectful tone.

I don’t think people expect the place to be a sewing club, you know? They don’t expect that people are not going to have different points of view. In fact, democracy requires that. And it should be a place where each political party can present itself as an alternative. Part of that actually means pointing out the problems with what the other parties are proposing or doing. So we’re going to have adversarial discussions here. It is debate. But I’d like to see an improvement in the tone and a decrease in negativity.

Q: Do you see your style differing at all from any of your predecessors, specifically the Speakers you’ve served in Parliament with?

A: That’s probably best for others to determine, as time goes on, and maybe some can already detect differences in style. But I will bring my own personality, my own approach, to this. And I’ve watched Speakers over the 18 years that I’ve been a member of Parliament and I will try to learn from what I’ve seen. It’s clear to me that it’s not as easy to do as it is to criticize. It’s easy to watch from the rows and think, well, that should be done differently—much easier to do that than it is sit in the chair.

For instance, sometimes trying to figure out which member has just said something, with their heckling for example, is hard to do. Because you’re watching the person who’s speaking and over here somewhere else, among the 338 members, in a House that stretches down a ways away from the Speaker—figuring out who that was, it’s a bit like a referee in a sense. It struck me the other day that it’s kind of like in a hockey game when the referee hears the first whack and sees the second one and so only one of the players gets penalized for that. And sometimes someone falls down and the referee thinks it was a penalty when it wasn’t. So you’ve got to be careful of that, but referees and speakers are imperfect.

Q: The one thing you said in your speech that I thought was interesting was you said, “I believe the Speaker should lead discussions about how to reform our procedures.” So do you see yourself taking a very active role in that discussion?

A: I think that in the discussions that I have with House leaders that it is important for me to try to encourage them to come up with ways amongst themselves, or with ideas that I have heard from members, to improve the way this place works and to ensure that MPs have a real say in government decisions. I see some moves in that direction—the idea of hopefully having more independent committees, things of that nature. But I’m interested in seeing how that develops. I’ve had members suggest various things to me that I then raise with House leaders and say, what about this?

And, in the end, if you’re going to change any rules, well, that’s a decision for the House to come to, which is usually led by the House leaders by their agreement. And of course we’ve seen over the years, a variety of things happen that way, so I hope to see more of that.

Q: Are there specific areas that concern you?

A: Well, I think that Canadians want to see their members of Parliament actually be somewhat independent and be able to speak their minds and even to have differences of opinion within political parties. I understand the difficulty with that because, frankly, if that happens a big fuss of it is made. But you want members to engage in real debate and not simply speak on behalf of whatever their party’s position is. While members are going to speak on behalf of their parties, you hope that they will actually also engage in discussion. For me, this is a lot to ask, but part of that is encouraging members to hear the other arguments, to consider the thought that none of us has an exclusive hold on the truth.

Q: Leading that discussion, is that mainly something that will occur in private or do you see yourself speaking publicly about some of the issues around Parliament and some of the ways that it might be improved?

A: I guess time will tell. But on the issue of decorum and behaviour in Parliament, some of that I’m already speaking on in the House, so that is public. As I said in my speech, I can’t do that alone. I mean, I am anxious to see an improvement in behaviour, I can do part of that, but if members really don’t want that to happen, then it won’t. However, I think Canadians feel very strongly about that. I hope, actually, that over the coming months they will speak to their members and actually congratulate them on the positive tone we’ve had so far. And let them know how important it is to them to see that improvement, and how pleased they are. Because I think that the best way to modify behaviour is with positive reinforcement. There are a number of tools that the Speaker has, but I hope to use much more of the carrot than the stick.

Related: Why do they pull the reluctant Speaker to the chair? An explainer on traditions

Q: There have periodically been conversations about whether members should be named and tossed out of the House for heckling and such. Do you see yourself quickly moving to that thing or do you imagine being very reluctant to toss people out of the House?

A: You should be reluctant to. That’s the ultimate sanction the Speaker has. In fact, you have to be careful when and how you use that. We’ve seen speakers not use it lately because what speakers saw previously was that it could play well for the person who was thrown out, that it could make them a martyr and help them make the case they were making against the other side. So you have to figure out, okay, when is that the right tool?

I think there are other ways to deal with these things and when it comes to members who are persistently heckling, first of all, I will hope Canadians will encourage them when they see the House performing well and also that reinforces how important this is to them. But I can envisage a time, conceivably, when I ask the constituents of a member if they might be interested in contacting his or her office to let them know how they feel about this fact that this member is speaking out or yelling when they don’t have the floor.

Q: One of the things that came up in the other Parliament was obviously the security of Parliament and the security arrangement was reorganized in terms of Parliament Hill. I know it’s only been less of a week, but have you given that much thought? Are you satisfied that things are moving in the right direction in that regard?

A: I will be getting briefings on that. In fact, I think, today I have my first briefing on security. So it’s a bit early for me to opine on that. But my impressions as a layperson who’s around the Hill is that certainly there’s a lot more here that’s been done, that it is a more secure place. As Speaker, I feel heavily the responsibility that I have to oversee security, to do my best to ensure that members of Parliament, and the public who visit here, that they are safe. At the same time, this is the people’s place. We want it to be an open place. I mean, I love the fact that in good weather, on Wednesdays, at lunch time on the front lawn, there are a thousand people out there doing yoga. It’s fantastic. Or there are people out there playing Frisbee or whatever. It’s so nice to see that. We want that to be maintained. Because the openness that makes us vulnerable is the freedom that makes us strong.

Q: Have you gotten used to the robes yet?

A: They’re a little warm. But I’m getting used to them.

Q: There are so many ceremonial trappings to it, the march every day, how does it feel to do that?

A: It feels a bit strange for me—I’m thinking, what the heck am I doing being the person in these fancy gowns and being in this parade? But it feels like you’re part of history. We do these things because of the history of the development of our democracy and it’s respect for that democracy.