Is Quebec waving goodbye to the orange wave?

Pollster Bruce Anderson on what’s behind the NDP’s Quebec slide, and whether the party underestimated Justin Trudeau 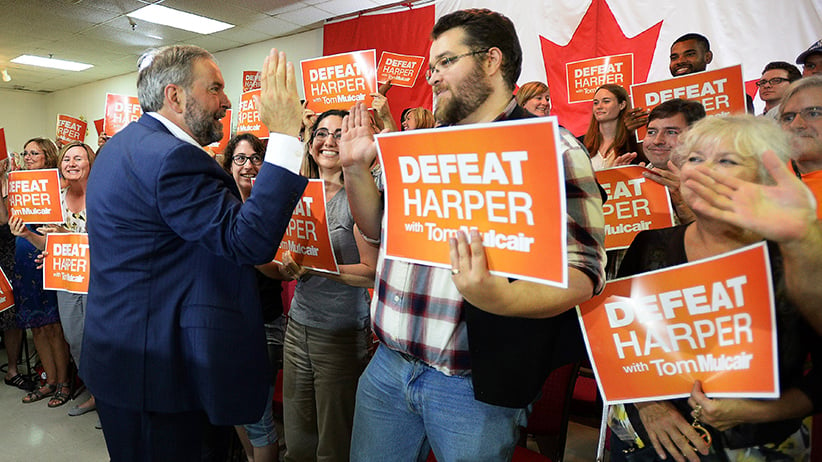 Long riding high in the polls, it would seem that the country’s love affair with the NDP has cooled over the last few weeks of the campaign. Yesterday, a poll from Ottawa-based Abacus Data suggests that while national numbers haven’t moved significantly, there are certain trends in the seat-heavy provinces of Ontario and Quebec. In the former, the NDP’s gains have largely been erased, while the party has tumbled 17 points in the latter. Abacus Data chairman Bruce Anderson helps to explain the surprising numbers.

Q: I know it’s difficult to find a cause behind this sort of thing, but, in your mind, what does the NDP plunge in Quebec coincide with?

A: There are a few things. The most obvious is the niqab debate, and I have no doubt that’s part of what’s going on. But I think all the parties deciding that the NDP had to be the focal point of the attack in Quebec is going to take a toll. And I think that the same forces that are affecting the NDP in Quebec are affecting the party elsewhere in the country. What we find is that the Liberals have claimed the territory over the NDP among those who want more ambitious change sooner. I think that’s because the NDP anticipated Justin Trudeau wasn’t going to be very successful out of the gate, so the party built a campaign to be more about change than only the Conservatives. Trudeau has established that his agenda is one of bigger change, and one felt more in the near term that the NDP, which has committed to balanced budgets.

Q: So it’s almost as though the NDP is being too cautious out of the gate.

A: They built something that felt like a front-runner’s campaign. Mulcair’s popularity began to grow so much, about 10 minutes after the Alberta election in May [won by the provincial NDP]. That was an indication, to me, that Mulcair shouldn’t have assumed there was more to it than a new openness to the NDP brand. The NDP runs best as a little-engine-that-could brand, and it felt that this would be wrong for them this time, given that they had such a large advantage over the Liberals. They wanted to establish that the Liberals weren’t a factor. A lot can change, and they can reset their campaign. But, on platform, I think they’ve been outflanked.

Q: Across the country, who is benefiting from the NDP misfortunes?

A: I think if anyone was looking for evidence that Trudeau had been outperformed in the French-language debate last week, we don’t see it in our numbers. The Conservatives and the Liberals have benefited in Ontario, and the Conservatives, the Bloc [Québécois] and, to some extent, the Liberals in Quebec. The question is what happens to those NDP supporters who start to believe that the NDP can’t replace the Conservatives, and whether they coalesce around a party that can. Obviously, that’s what the Liberals would hope for.

Q: When does the Bloc graduate from afterthought to spoiler?

A: There’s no real evidence to me that the Bloc’s rise has to do with the nationalist movement. It’s more like people saying they like the Bloc’s values more than Mulcair’s, when they hear [Gilles] Duceppe talk about pipelines or the niqab. I don’t know if it has much legs, to be honest.

Q: Nationally, in order for the NDP to do anything in this election, the party has to take a significant chunk of Ontario. How likely does that seem to you with numbers like these?

A: If the NDP keeps doing the same thing and expects these numbers to turn around, that doesn’t seem likely to me. I don’t think the party has developed a clear enough idea of what the NDP campaign is about. The party has allowed it to be defined by others. The Conservatives have defined the NDP as being risky economics, and by the Liberals as being not really about change.

Q: It’s interesting, because the NDP campaign has actually been pretty good. Mulcair is a good campaigner, a good speaker, and he’s done well in the debates.

A: If the NDP has a problem, it lies in whether they made a strategic miscalculation in thinking that they didn’t have to worry about Trudeau; they just needed to beat the Conservatives. If Trudeau didn’t exist, their strategy might be perfect. But, given a pretty competitive Trudeau campaign, it’s a strategic calculation that hasn’t paid off yet, is probably the polite way to put it.

Q: What’s behind the momentum of the Liberals and the Conservatives?

A: The Liberal momentum has been the steady accumulation of credibility in this campaign. On economic policy matters, on different platform ideas, by bringing out former leaders, by performing better than people expected in the debates, I think the Liberals have reminded people that they’re a brand that merited their support in the past. For the Conservatives, I think there’s support for the idea that things are pretty good, and things will get worse if there’s a change in government.