Is there such thing as a 'backroom' figure anymore? 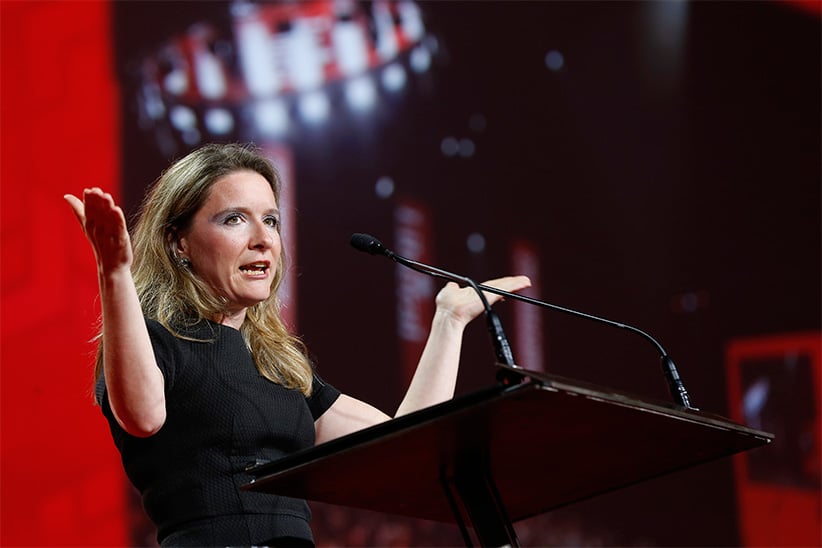 They jammed the hall for Katie Telford at the Liberal convention in Winnipeg today, and why not? Now chief of staff to Prime Minister Justin Trudeau, after co-chairing last year’s triumphant Liberal election campaign, Telford is one of the most powerful figures in the party and the federal government, generally rated second in influence only to Gerald Butts, Trudeau’s principal secretary and old pal.

So, in that sense, it seemed entirely normal that Telford would address this partisan crowd. She’s a big deal to Liberals. They were delighted to hear from her. But, in another way, her speech was highly unusual. Chiefs of staff to prime ministers, and other top advisers, are routinely referred to as backroom figures for a reason. That’s where they operate, or at least it was always that way. Maybe today was the start of something different.

At conventions of this sort, parties have always put the spotlight on elected politicians they hope to boost, or on potential future candidates they want to introduce, along with a roster of experts in policy and politicking deemed interesting enough to put up behind a podium. And, of course, on their leader. That part hasn’t changed: The biggest event here in Winnipeg will be Trudeau’s speech, slated for Saturday afternoon, for which many of the chairs will be taken out of RBC Convention Centre’s biggest hall, the organizers announced, the better to pack ’em in standing.

But even Trudeau might be hard pressed to better the buzz that hummed around Telford. She was introduced as “a guiding spirit and a champion.” Early on, though, when she mentioned her own reputation as the sort of strategist who talks a lot about data, I thought she might be leading into some fine-grained, by-the-numbers analysis of last year’s election, which is the sort of thing I expected from a campaign boss addressing party workers.

Related: Katie Telford on what the 2015 federal election campaign was really all about

Instead, she used that only as a rhetorical entryway into a talk that was far more colourful, personal and anecdotal—in short, the kind of speech a politician might hope to deliver. She mentioned that in last year’s campaign, 80,000 Liberal volunteers contacted potential voters 12 million times, leading to over four million “actual conversations with Canadians in every corner of this country.”

But then she observed that “it can be a bit cold to talk about numbers,” and moved on to storytelling. And a particular sort of storytelling. The sort that let the rank-and-file feel they were glimpsing the control rooms of the 2015 election machine. “We spent our days and many nights talking about numbers, and turning each one of them into a meaningful element of the campaign,” Telford said.

“But my co-conspirator that you saw in the video earlier”—the convention crowd had already been treated to a slick video of senior party operatives talking shop—“Gerry Butts would swing by headquarters early on in the campaign, on a down day for the plane, and he would remind us what the numbers were really about, what he was seeing out there on the road.”

By now the room was really in her thrall. It’s Trudeau’s second-most powerful aide spinning a behind-the-scenes yarn about his most powerful guy! “And he went around to the whiteboards throughout campaign headquarters,” Telford said about her co-conspirator, “and he’s kind of tall, and then he got up on a chair, so he was even taller, so it put it up really high—no one could erase it—and he wrote three words: People, people, people. That was really what the campaign was about.”

What great material. Telford made the most of it, too. Not just a telling moment from the very heart of the campaign, but one featuring the most storied figure in Trudeau’s retinue. Not just, say, recounting something he said, but a lively description of his actions one fine day. And it all ends with that simple, inspiring scrawl on a white board. I admire good speech-making and I particularly like the little detail Telford offered about the words being written so high that “no one could erase it.”

A few hours after the standing-room-only crowd rose to give Telford her ovation, a little while after she stopped trending on Twitter, I came back to the plenary hall where she had spoken. It was for a panel discussion billed as being about “real change for the middle class.” The lineup was seemingly top-tier: five cabinet ministers, all with economic portfolios, including Finance Minister Bill Morneau, arguably the most powerful elected politician in Ottawa, after the Prime Minister. The room was perhaps one-quarter full.