Is this Peter MacKay's party now? 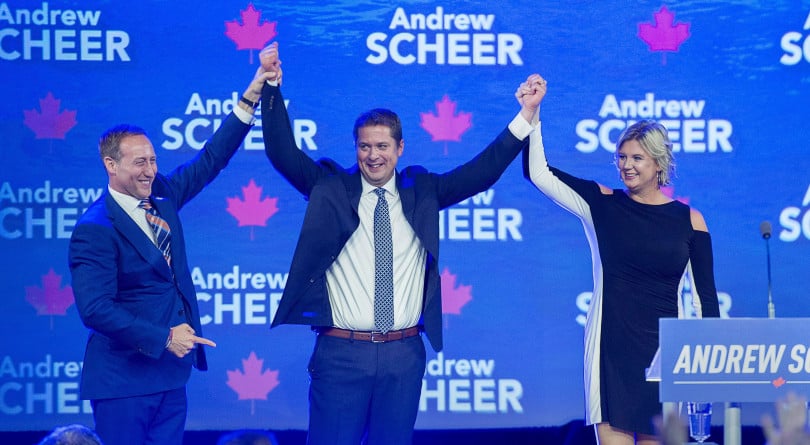 Tory MP Pierre Poilievre, who seemed set on mounting a bid for his party’s leadership, and had even scheduled a weekend event in his riding to make it official, is apparently not running after all. That’s according to a tweet from Sun columnist Brian Lilley (soon after confirmed by the Globe and Mail). Peter MacKay is now, as Stephen Maher predicted just a week ago, the clear frontrunner. Seven MPs have already endorsed him and so has Tom Flanagan, a former senior aide to Stephen Harper.

Kory Teneycke, a former Harper communications director and Tory strategist whose disclosure above his column for CBC News must set some sort of word-count record, reminded everyone of one very important thing: whoever wins the Conservative leadership, the party still belongs to his old boss.

das bestrafte Auto: To no one’s surprise, Volkswagen paid an enormous, record-setting fine for breaking Canada’s environmental laws by knowingly importing cars that cheated emissions tests. The $196.5-million penalty is 20 times higher than the previous high mark. The proceeds will end up in the federal Environmental Damages Fund. The money could be distributed among provinces proportionally, based on the number of cars illegally imported, towards projects that benefit the natural environment. Apply for funding now!

VW paid a hefty price, but the company avoided criminal charges. Earlier this week, Stephen Maher raised key questions about why the case was apparently never referred to the RCMP, despite an admission of criminal wrongdoing by the company in the U.S.—and why the prime minister’s office met with the company while it was under investigation.

Theresa Tam, Canada’s chief public health officer, held a press conference yesterday on the rapidly spreading coronavirus—which, as of this writing, hadn’t spread to Canada. For now, the message is the same. The media advisory used identical language to a similar update three days earlier: risk of Canadian cases is low; the agency is being vigilant. This is a case of boring is good. For now, here’s everything you need to know about coronavirus.

Ottawa is building a new library, which in many cities would be a non-event, but in the nation’s capital causes the locals to fret about the sort of expectations they should set (see: the saga of the expanded Chateau Laurier and, oh yeah, the struggle to make LRT run effectively). Paul Wells speaks for concerned residents everywhere:

It’s difficult to attend any announcement in Ottawa for any building, monument, public enterprise or expression of collective will without feeling a nearly overwhelming sense of foreboding.

The thing is, Wells writes, this library just might be great.

NDP leader Jagmeet Singh gave notice to his fellow parliamentarians of his party’s first private members’ bill of the new minority era: universal pharmacare. Singh struck a conciliatory tone in a letter to the PM, quite a departure from the hyper-partisanship that tends to define our time. “In the spirit of cooperation,” Singh wrote, “we are offering you a full briefing on our pharmacare legislation.” Will the Prime Minister, who instructed his MPs to work with the opposition, bite?

What does it say about the culture of the Liberal Party that such important party higher-ups as former prime minister Jean Chrétien, his former chief of staff Eddie Goldenberg, his former finance and foreign affairs minister John Manley—all of whom now work for firms and businesses with close relationships with Chinese companies, including Huawei—as well as his former defence minister John McCallum—who Trudeau dispatched to China as ambassador—are so confident they will get a hearing when they argue the government should capitulate to China’s demands?

The Transportation Safety Board of Canada is still watching the Iranian-led investigation into Flight 752 with eagle eyes. The TSB posted an extensive update on the investigation. The black boxes are still in Iran, which experts say doesn’t have the capability to do effective analysis. But TSB staff will, they say, participate in that work whenever and wherever it occurs.

In Andy we trust(ed): Torontonians watched their public-transit boss, Andy Byford, head to the Big Apple in 2017. He’d somehow managed to earn the TTC’s subways a prestigious award before he left, and then the hard-working Brit got to work on fixing New York’s struggling subways. Two years later, after earning hero status from transit geeks, Byford is out. Politico was first to report a testy, fraught relationship with the state’s governor, Andrew Cuomo, was simply too much to bear.

Caucus alert: For nine hours today, federal Conservatives are caucusing in West Block. Outgoing leader Andrew Scheer will launch the festivities with a speech (which is open to the media), and then behind closed doors they go. The Tories will reconvene tomorrow morning, too.