A report from the Council of Canadian Academies offers more alarming research about the impact of climate change, with no dissenting opinions 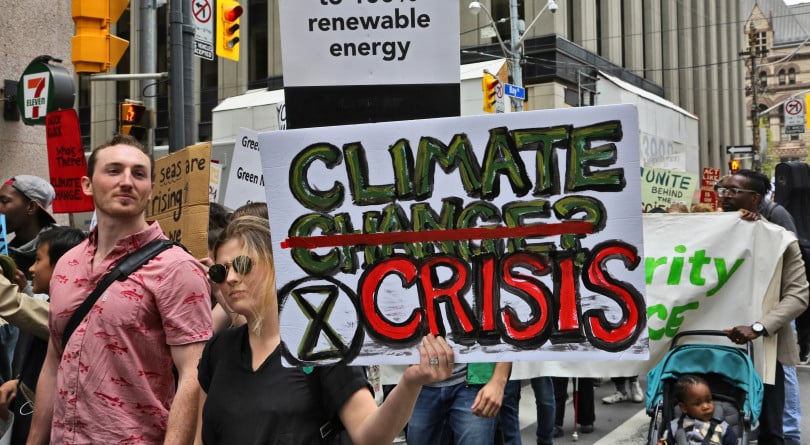 Youth march in a massive protest against climate change in Toronto on May 24, 2019. (Creative Touch Imaging Ltd./NurPhoto via Getty Images)

The thing to keep in mind when it comes to taking in what the Council of Canadian Academies (CCA) has to say in the report it’s releasing today on climate change is that the council has a deep aversion to making outlandish statements or wading into rough political waters.

So the conclusions in Canada’s Top Climate Change Risks, a report commissioned last year by the Treasury Board of Canada—the federal government’s management arm—need to be read as especially alarming because the CCA just isn’t prone to being alarmist.

“Climate change is very likely to cause significant negative impacts across many natural and human systems in Canada over the next 20 years,” the report warns. And that’s not even close to the worst-case scenario. The consequences of climate change caused by humans pumping out greenhouse gas (GHG) emissions, mostly carbon dioxide from burning fossil fuels, are too complex for even the top experts to be confident about how bad it could get.

“Data limitations and evidence gaps hinder understanding of many likely impacts of a changing climate, especially where interactions among economic, natural, and social systems could lead to cascading consequences,” the CCA’s expert panel says. “Tipping points in natural systems and climate dynamics could lead to runaway climate change and impacts impossible to reverse on the scale of centuries or millennia.”

With that disturbing caveat in mind, the CCA sets about itemizing and ranking the risks already established by reliable research. It’s panel of experts, and a raft of specialists who were assembled for a workshop discussion, identified a dozen areas of vulnerability, then narrowed that list to the six that show the highest potential for adapting as governments devise policies responding to climate change.

Those six where adaptation looks most promising are physical infrastructure, governance and capacity, health and wellness, agriculture and food, coastal communities, and northern communities.

Look closely at those two lists, and it’s clear the CCA finds better chances for adapting when it comes to human institutions than natural systems. So, for example, shoring up roads and bridges, or buffering coastal communities against increasingly destructive weather, look expensive but doable. But figuring out how to save endangered species, or somehow safeguard whole forests and fisheries that evolved for a different climate, are far more daunting challenges.

In a bid to keep the report manageable, the CCA chose a two-decade timeframe for its risk assessments. That’s not a distant time horizon, given the extremely long-term implications of climate change.  “When you go out beyond 20 years, the information and data become pretty sparse,” John Leggat, the former Department of National Defence assistant deputy minister who chaired the CCA’s expert panel, told Maclean’s.

But Leggat said the downsides the CCA considered over in the 20-year outlook it chose are not speculative. In fact, they’re already happening. Even dramatic reductions in GHG emissions won’t help much over that period.  “Things could get worse,” he said. “They’re not going to get better.”

The CCA had plenty of recent experience to take into account when it comes to the steep price already associated with climate change. Notably, public and private insurance costs have spiked as a result of the more frequent, more intense extreme-weather events.

The federal government’s assistance scheme to reimburse provinces and territories, and sometimes individuals, after natural disasters paid out more from 2009–10 to 2014–15 than in the previous 39 years combined. The Canadian insurance industry paid 200,000 claims worth a record $4.9 billion for property damage associated with weather-related damage—including forest fires, floods, and punishing winds—in 2016 alone.

At least insurance can compensate for smashed, soaked and burned property. There’s no payout when natural systems are permanently ruined. Yet the CCA summarizes—in its customary level, unemotional terms—scientific research that adds up to ecological tragedy.

“Many bird populations appear to be in decline; tree mortality has increased due to higher rates of forest disturbance such as insect infestation, drought, and fire; and mortality has also increased in some fish stocks, shellfish, and other marine species in response to higher water temperatures, ocean acidification, and low oxygen levels,” the report says.

In case you’re holding out hope that the CCA found some dissenting opinions—reputable experts who don’t think it’s so bad as all that—no such luck. Leggat said the report brought together a wide range of specialists for both its expert panel and a high-level workshop discussion, and while there was a lively discussion, little disagreement emerged about the key conclusions.

The CCA—a not-for-profit organization founded by the Royal Society of Canada, the Canadian Academy of Engineering, and the Canadian Academy of Health Sciences to provide evidence-based support for public policy development—brought together climate researchers, insurance industry representatives, economists, health specialists and others.

Their report strives for a pragmatic tone. Still, the implications of climate change are so fundamental that even the CCA’s systematic way of analyzing risks brings vast, philosophically charged questions into play. A big one is how to look at aspects of nature and civilization as distinct categories.

In reality, the potential ways human systems might be adapted in the face of climate change look hopelessly inadequate if natural systems are allowed to spiral into indefinite decline.

“There’s sort of a distinction between those two,” Leggat said, “but they’re very closely linked, too. Our human systems cannot exist without our natural habitats. And our natural habitats are at risk, and we really don’t understand them as well. We can look after ourselves, I guess—I mean, it’s going to take a fair amount of effort—but there’s a lot of unknowns in natural systems, and that creates a high degree of uncertainty about the future.”