ITQ BerryCam - In which our heroine is confronted by abstractly angry farmers, and surprisingly cheery Liberals

After spending the morning outside Rideau Hall, ITQ headed off to the Billings Estate in Ottawa South to liveblog Stephane Dion at the launch of the local Liberal campaign – which we did right here. But first, we had to run a small- to medium-sized gauntlet, as gauntlets go, of protesters: 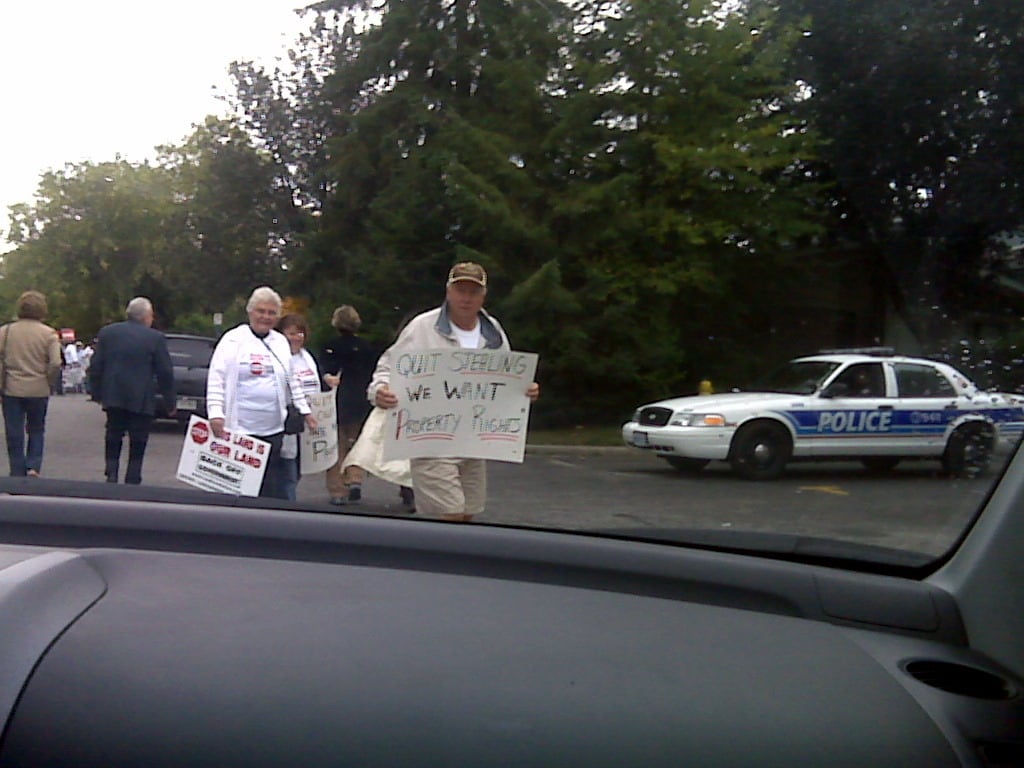 Actually, "protesters" might be a bit too strong a term; they were more like "angry-looking people carrying oddly generic signs while walking determinedly in the opposite direction from the rest of the red-shirted crowd". But that's a bit unwieldy. 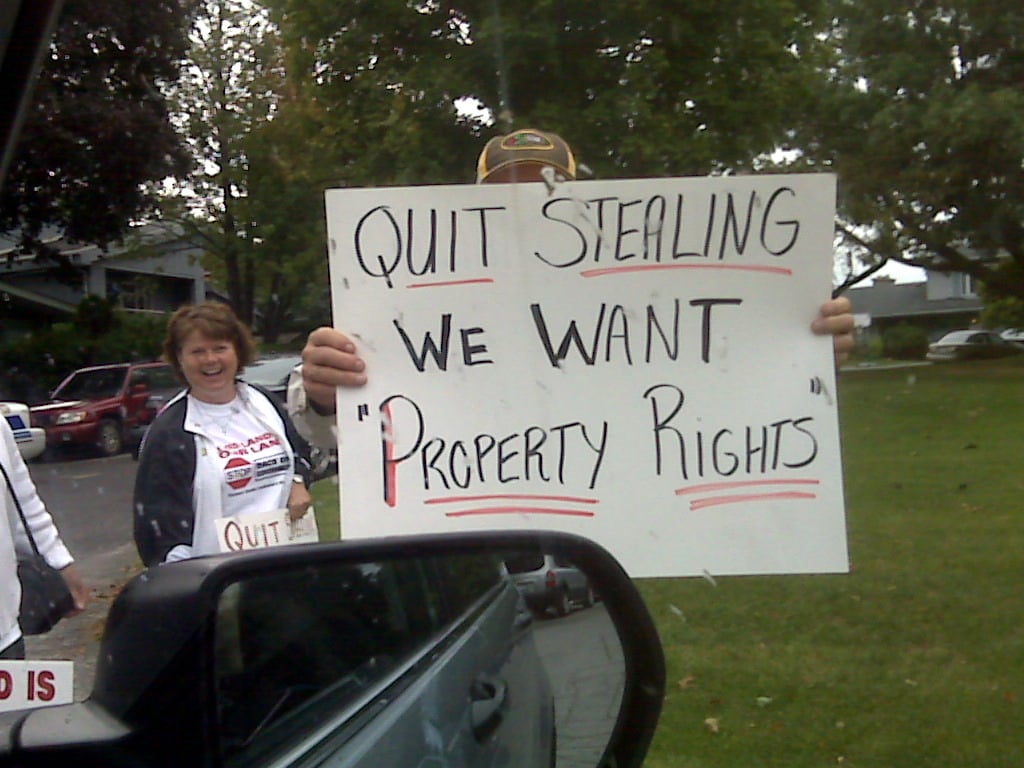 Yeah, it's hard to see how this could relate directly to Stephane Din or the Liberals - I mean, it doesn't even mention the $10 head of lettuce or the permanent tax on everything - but I'm assuming that it must have had something to with the Green Shift. 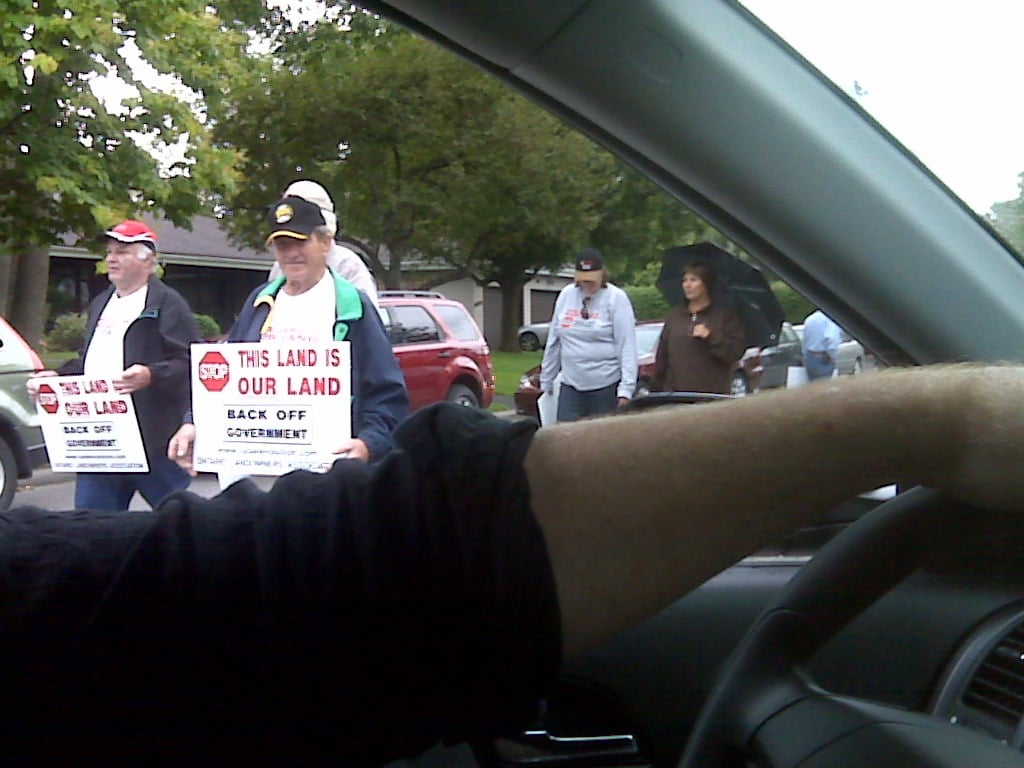 For a moment, I was having Ron Paul supporter flashbacks, but thankfully they didn't surround the car and start chanting at us. Oh, and that arm doesn't belong to ITQ - it's actually the appendage of Ottawa Citizen reporter Glen McGregor, who was awesome enough to drive us out to the estate. 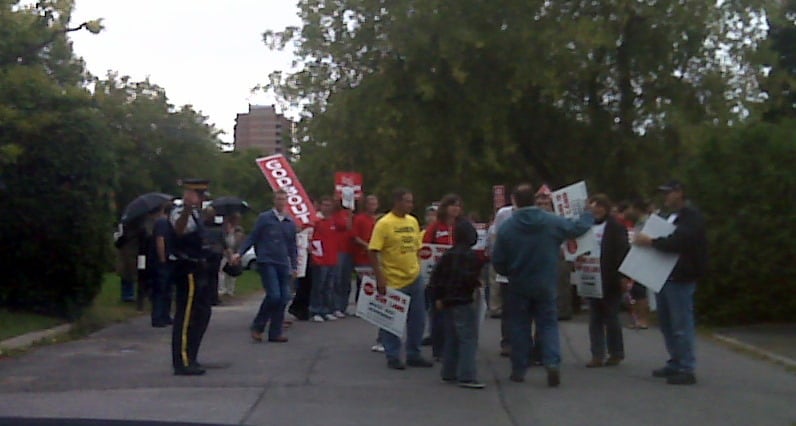 This was pretty much the only time that the two groups - Liberal supporters and property rights demanders - ran into each other, from what I could tell, and it was fairly peaceful -- there was scowling, and possibly some slogan-yelling (our windows were closed so we couldn't hear what was going on) - but that's about it. 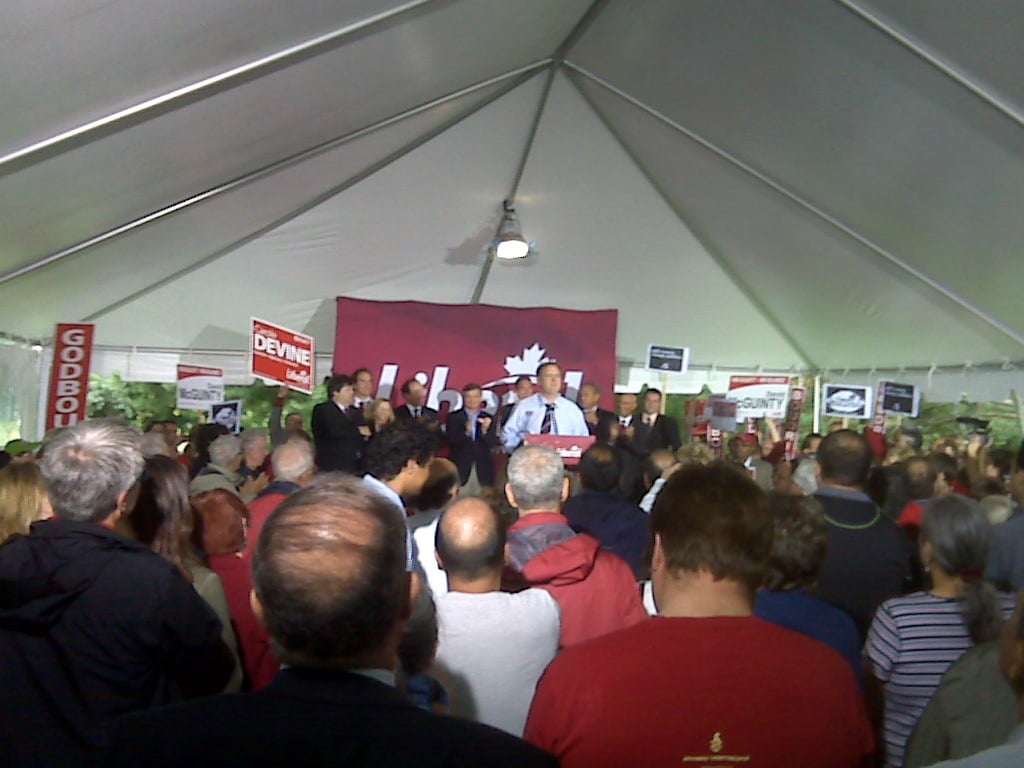 David McGuinty was the warm-up act, and introduced the full slate of Ottawa-area candidates. This shot was taken before I lost my spot on the riser to that unnamed Liberal staffer referenced in the original liveblog, who - I should note - actually took the time to apologize by email, and has been completely and totally forgiven. (ITQ is really a bit of a softie, but shhh - we don't want to ruin our reputation.) 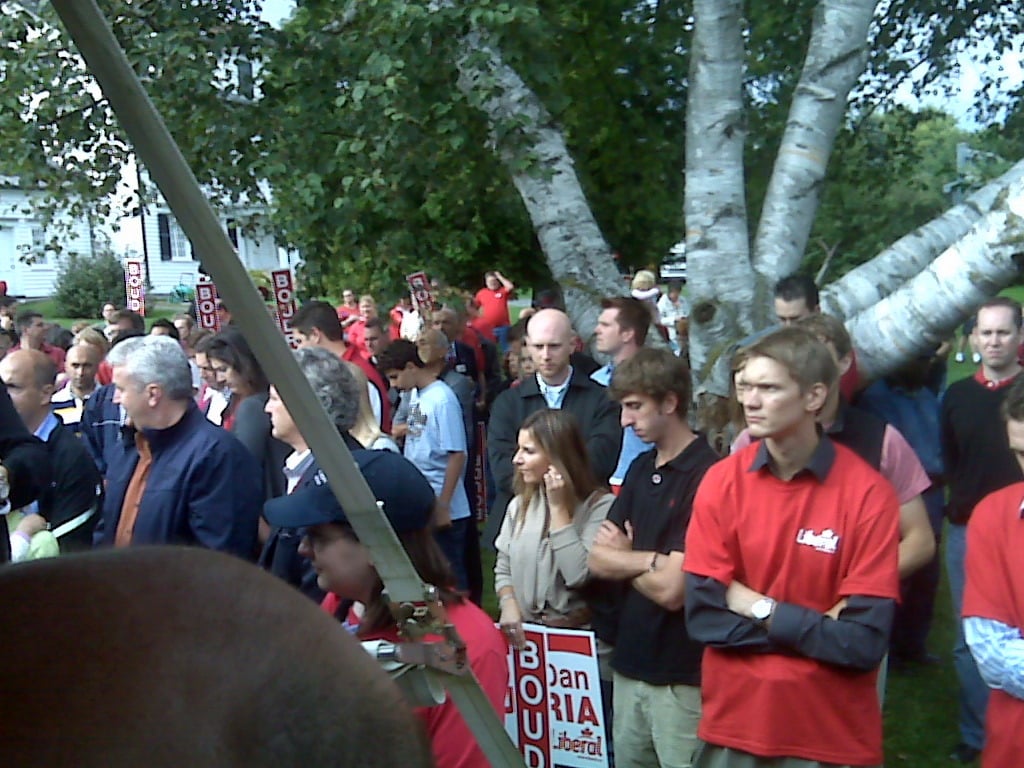 Outside the tent, it was on-again off-again drizzle, but the crowd didn't seem to mind -- and it actually was a crowd; at least three hundred, which I don't think the organizers were expecting. I mean, we're not talking Obama levels of ecstatic excitement here, but aside from that inexplicably sullen guy in the front, it was a fairly upbeat crowd. 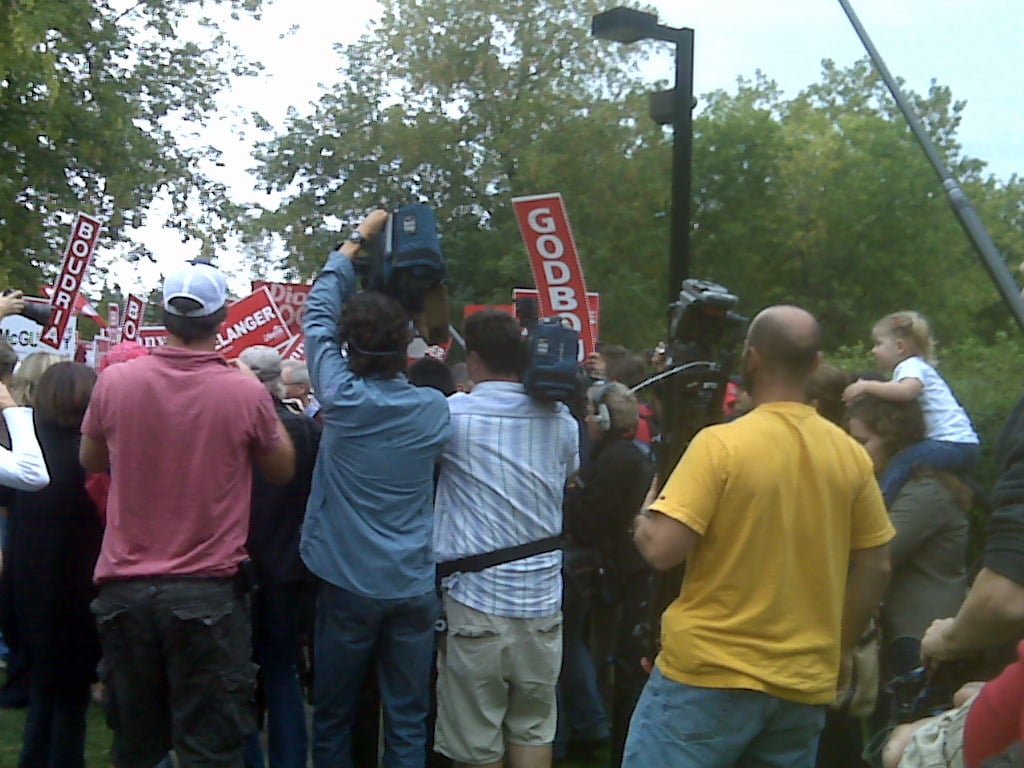 Hey, kids! Can you spot the leader (or, depending on your perspective, the non-leader) in this scrum? 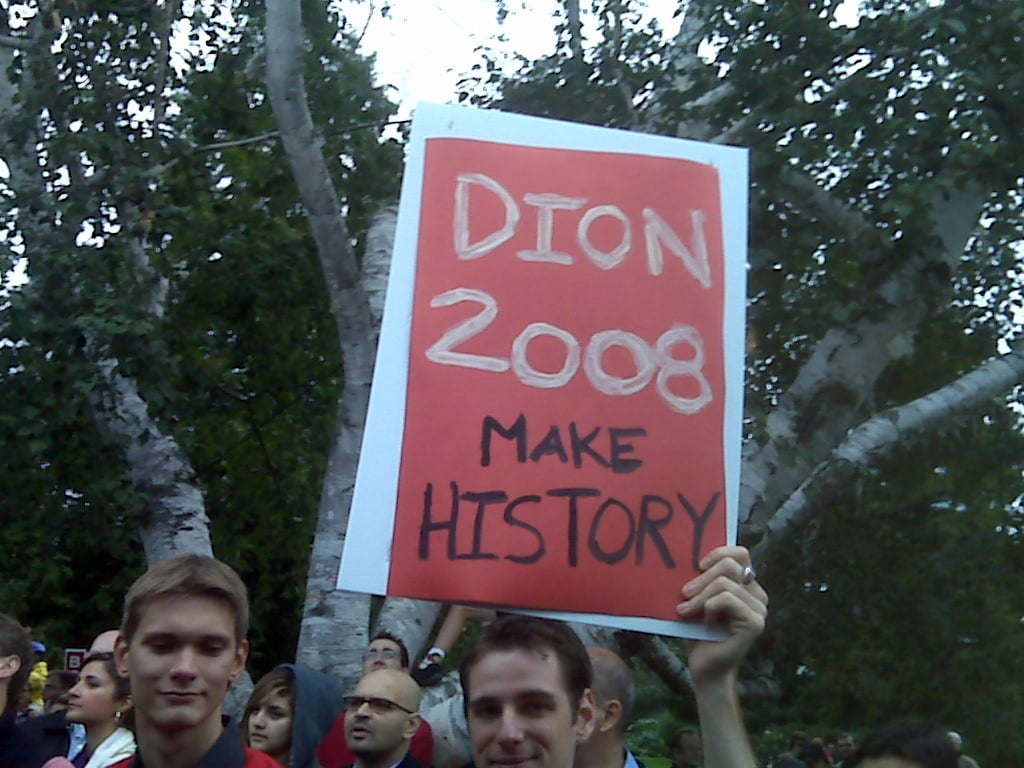 Look! A suspiciously Obama-backdropesque sign! At least it makes sense, though - unlike, say, Harper Leadership, which STILL HAS NO VERB, PEOPLE. 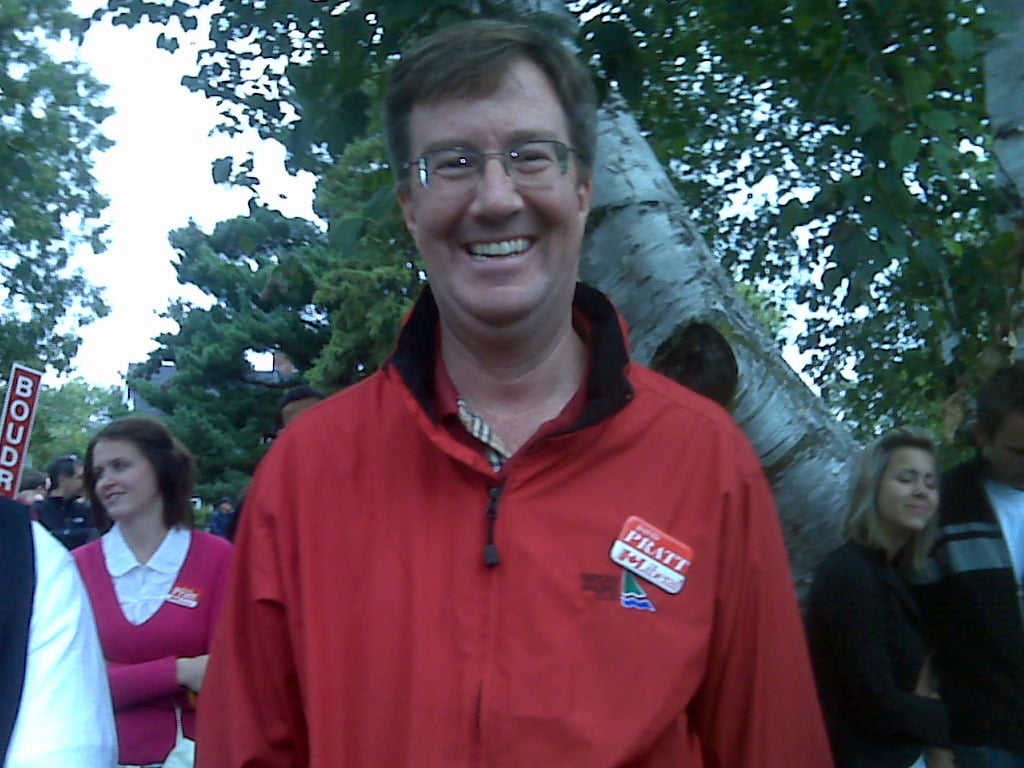 As promised, it's Jim Watson, former mayor, current minister, future - I have no idea, actually, Maybe mayor again? We might be needing a new one sooner than expected.

The Liberal bus. Not out of gas or on fire or stuck in a Hell dimension or filled with tribbles. See, things are totally looking up.

FILED UNDER: billings estate David McGuinty Election Watch liberal tour not sure about the maroon on the road stephane dion is possibly a leader wow i'm tired