It's a different kind of WE Day on Parliament Hill 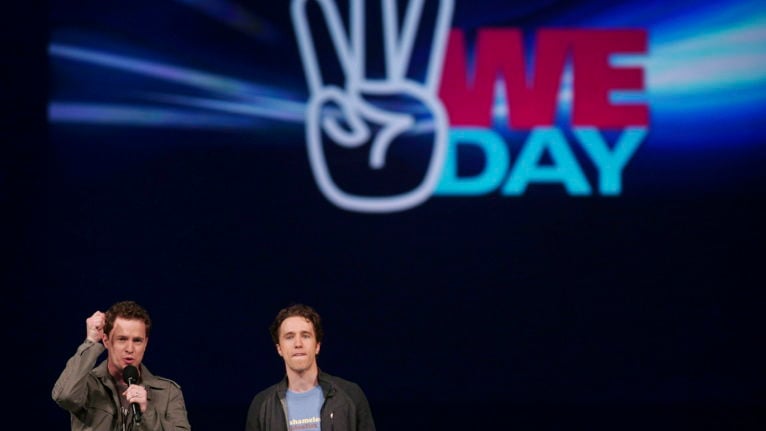 Marc, left, and Craig Kielburger, co-founders of the WE Charity, speak at the charity's celebrations in Kitchener, Ont., Thursday, Feb. 17, 2011. (Geoff Robins/CP)

Never has a federal “contribution agreement” endured such scrutiny. The document codifying WE Charity‘s delivery of the Canada Student Service Grant was supplied to the Commons finance committee, after which it was supplied to Ottawa journalists. They reported a strange finding. The CSSG was pegged by Department of Finance spending estimates as a $912-million program, but the official agreement added up to only $543.5 million—with an even $500 million headed for students’ bank accounts, and the rest to WE and its charitable partners. Add questions about that minor discrepancy of $368.5 million to the pile as everyone on the outside looking in keeps finding new reasons to furrow their brows.

In the same tranche of documents, the Globe and Mail observed that WE would have received $33 million by early July, only weeks into the life of the program. CBC News published the details of correspondence between public servants and WE co-founder Craig Kielburger. The Toronto Star noted that WE Charity had started working on the program before cabinet signed off on it.

Tomorrow, the finance committee will hear testimony from the Kielburger brothers, Craig and Marc, as well as WE Charity CFO Victor Li. Parliamentarians will also talk to Michelle Douglas, the former chair of WE’s board of directors who told the Globe she resigned earlier this year over “concerning developments.”

The finance committee will also hear this week from Prime Minister Justin Trudeau and his chief of staff, Katie Telford. The PM will sit in the proverbial hot seat for an hour—which, a Tory partisan points out, means Trudeau will face tough questions for just a fraction of 60 minutes after an opening statement and friendly questioning from fellow Liberals. Of course, Liberal MPs were happy to say what they really thought when they went off the record with the Hill Times.

Ontario Premier Doug Ford settled into his populist, folksy happy place at a press conference yesterday. Ford expressed disbelief at reports of a 200-strong party hosted by an as-yet-unnamed Brampton man. Evoking tasty images of sharp eastern Ontario cheddar improperly placed on a fibrous, Ontario-made Breton cracker, the premier chirped that “you’d think that the cheese slipped off the cracker with these people.” Ford even half-requested news agencies “name and shame” the man, adding the city should fine him $100,000 and his “yahoo” party-goers $800 a head. (Only a few days ago, Ford said he “never believed in hitting someone with an $800 fine,” because “people are hurting right now.” Patience apparently disappears quickly. The local mayor, Ford frenemy Patrick Brown, did confirm charges were laid.)

Will Canada stand against modern slavery? Terry Glavin, writing in Maclean’s, shines a light on one Liberal MP’s quest to get his government to take seriously a human-rights disaster in China. John McKay, a parliamentarian for 23 years, appears to have hit a brick wall.

While the Trudeau government is coming under increasing pressure to extricate Canada from commercial supply chains compromised by slave labour in China, a frustrated senior Liberal MP says the Prime Minister’s Office appears to be ignoring mounting evidence that China’s persecuted Uyghur minority, after being rounded up into re-education camps in the northwestern province if Xinjiang, is now being corralled into industrial gulags to satisfy the needs of global corporations.

God forbid the federal government call a loss a loss. Trade Minister Mary Ng announced a “partial agreement” with Australia on a complaint from down under about Canadian tariffs slapped on wine imports. The Aussies whined to the World Trade Organization that the duties violated global rules. Canada backed down, but dressed up the slap-down as a continued effort to “ensure a competitive Canadian wine industry.” Meanwhile, as the Aussies are popping a bottle, B.C. MP Dan Albas—a noted champion of freer trade in liquor across provincial borders—revived a call for more B.C. wine across Canada.

Prepare the circus puns: Governor General Julie Payette‘s office has brought in Brigitte Carbonneau, a 25-year veteran of Cirque du Soleil—where she reportedly worked on “high profile and sensitive files”—to ensure that “deadlines and quality standards are met for all documentation related to the Governor General.” CBC News obtained a leaked memo from the GG’s secretary, Assunta Di Lorenzo, announcing the hire.

Finally home: After a six-month deployment to the Mediterranean during which HMCS Fredericton lost six crewmates in a helicopter crash, the ship returns to port in Halifax today. Tareq Hadhad, a Syrian refugee and new citizen who co-founded a sweets company called Peace by Chocolate—and once told Maclean’s he would cherish his right to vote in Canada—has crafted bespoke chocolate bars for everyone aboard.