It's a very vertical DonOLO

It’s Peter Donolo day here on the Hill — pasta and vintage movies for everyone! Especially the vaguely-familiar names on the org chart the Liberal Opposition sent out this morning. Meet the hardy band of scrappers who move on to the next episode of Survivor: Fourth Floor, Centre Block: 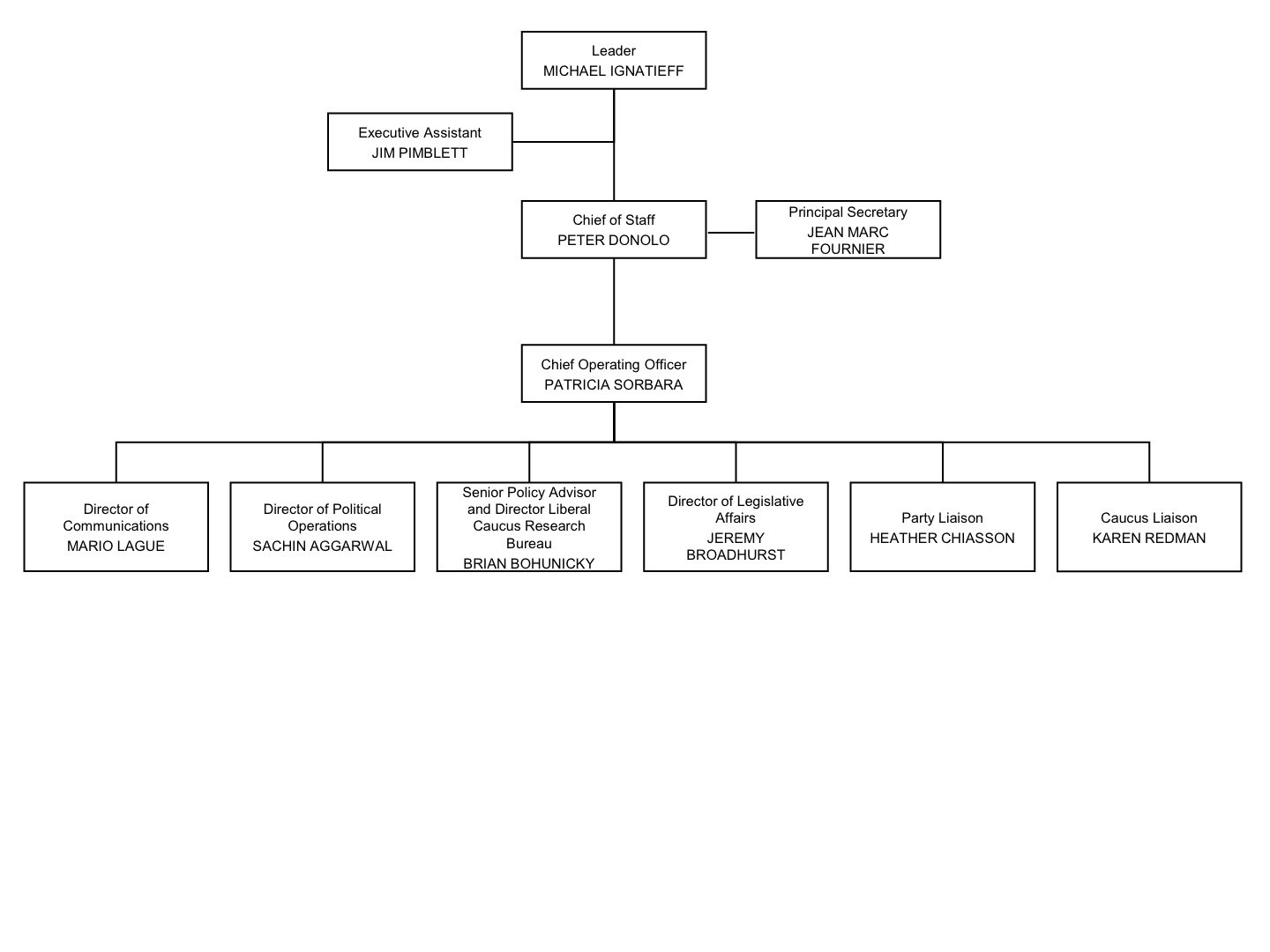 Now I’m going to make some general comments on this crew and the way they’re organized. Since I may accidentally say nice things about the way Jean Chrétien ran his office, let me first hasten to say that some very prominent names here had very prominent roles when Paul Martin was leader. Jim Pimblett was at his right hand for the whole ride, and for a while after, as Martin’s main staffer after he stepped down as leader. And Mario Laguë was communications director for Martin’s first abbreviated stint as PM, before the 2004 election. (Mario’s in the index of my book, if you want to see how that worked out.)

So there’s no point looking for evidence of rampant factionalism in these names. Also no point scouring the list for notorious Donolo cronies. Donolo never had cronies: in his first stint in Ottawa he was well liked by (mostly) everyone, but kept a certain emotional distance, as far as I could tell, from everyone. The two new names that come leaping out of this chart at me like something from a Doctor Tongue movie are Mario Laguë and Brian Bohunicky. I don’t recall either of them being boon Donolo companions, and in the random, distracted games of Who-Do-You-Think-Is-Going-To-The-DonOLO (pronounced Dun Oh Ell Oh) that I’ve participated in over the past three weeks, precisely nobody named these two. What they have in common is generational — they were already Hill veterans in the late 1990s, Bohunicky as a staffer to British Columbia cabinet ministers, Laguë in a succession of mandarin-type roles for the Quebec provincial Liberal government and at PCO. So Donolo’s reached out to people from his own time, not to poker buddies.

Laguë was Canada’s ambassador to Costa Rica after 2004, was thought to be in bad favour with Harper but served out his term after 2006 without difficulty, and worked for two years at an environmental NGO outside Geneva until recently. (He will be an early target for Conservatives because his name came up during the Adscam unpleasantness. Details are here, here and, ahem, here.) I would have sworn Bohunicky, who is a friend of mine, was right out of politics. He has done good work for the Harper government at senior levels of the bureaucracy, first on the Pacific Gateway infrastructure project and lately at Agriculture.

So much for personalities. I’m not super-familiar with the rest of this crew. Sachin Aggarwal becomes the most senior surviving Class of ’06 Ignatieff-ite. What’s most striking, however, is the structure of this office. Since 2003 it’s been fashionable for successive Liberal leaders’ staffs, either to brag about how “horizontal” their organizations were, or simply to have a very horizontal structure without, I suspect, much awareness that that was happening or that other structures were possible. A “horizontal” structure is one without a lot of hierarchy, where just about everyone has access to one another, to different files, and to the top people. Sometimes these work formidably well. We’re pretty horizontal at Maclean’s. Michael Bloomberg’s New York City Hall is a famously flat structure, and that guy looks like mayor until the end of time. But when it works badly, it’s chaos, gridlock, and an organizational version of a Little League soccer team where absolutely every kid chases the ball instead of playing position.

Under Bill Graham (to a limited extent and at limited cost), Stéphane Dion and Ignatieff I, senior jobs seemed to fall randomly into people’s hands with no clear idea of what they meant or what anyone was supposed to do. Those days have come to a screeching halt. The hardest work lies ahead for Liberals, including this crew, and the org chart hasn’t been written that can reverse a nine-point polling deficit all by itself. But Donolo has made a good start of things.

UPDATE: Susan Delacourt has Donolo’s memo explaining who these people are and what they’re going to try to do.

UPDATER: Jane Taber’s version features this paragraph, which is completely wrong: “With the help of David Zussman, a public policy and governance expert in the capital, Mr. Donolo has also managed to attract some serious francophones, which were lacking in Mr. Ignatieff’s previous OLO. Jean Marc Fournier, a former MLA and Quebec cabinet minister from Chateauguay, is the new principal secretary. He also served as a senior adviser to Quebec Premier Jean Charest.” Guess where Zussman’s supergenius francophinder phound Fournier? In Ignatieff’s office, where he’s been since August.