Duceppe will take over for Mario Beaulieu, who will stay on as party president 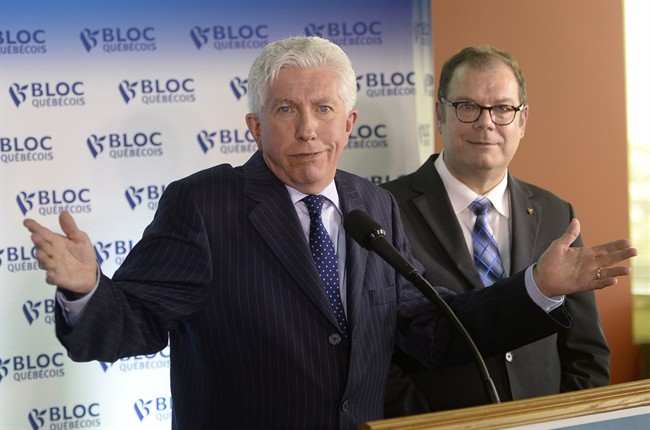 MONTREAL – Gilles Duceppe is back at the helm of Bloc Québécois and has mere months to get the moribund political party ready for the upcoming federal election.

The longtime federal politician made it official Wednesday during a news conference at the sovereigntist party’s headquarters in Montreal.

Related: Paul Wells on how Duceppe’s return affects the 2015 election

“The gesture we’re making today isn’t Duceppe replacing Beaulieu, it’s Duceppe joining Beaulieu and the team in place and those who will come,” Duceppe said. “We’re adding, we joining together and we’ll move forward together.”

Beaulieu, who won the Bloc leadership race nearly one year ago, concluded he was running out of time with this fall’s federal election looming.

Enter Duceppe, who Beaulieu said will give the Bloc campaign an experienced leader and a name recognition he simply didn’t have.

“I came to the conclusion that we needed to give new breath to the Bloc campaign,” Beaulieu said. “I’m convinced that with Gilles Duceppe as leader, we are headed towards a new victory for the Bloc.”

Duceppe said a decision to return came after a discussion on the weekend with Parti Québécois Leader Pierre Karl Peladeau, who assured the provincial party is ready to provide support to the Bloc.

He reprises a role he held for 14 years from 1997 until the sovereigntist party was nearly wiped off the electoral map in 2011.

The party won a mere four seats that year as Jack Layton’s NDP roared through the province.

The casualties included Duceppe, who lost the Montreal riding he had held since winning a byelection in 1990.

Duceppe said Wednesday that Quebec’s voice in Ottawa has weakened under the NDP and only a strong Bloc presence in Ottawa can change that.

The Bloc currently has just two MPs out of 75 in Quebec.