It's raining, it's pouring, the PM names a cabinet

Image of the week: Justin Trudeau strolled up to Rideau Hall, umbrella in hand and storms brewing. It was a world apart from the happier times of 2015. 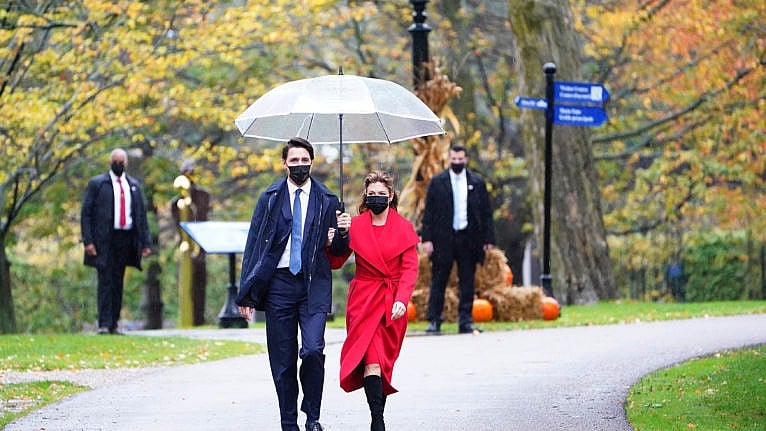 In 2015, Canada’s new, youthful prime minister led his gleefully optimistic and diverse cabinet on a golden march under clear blue skies. He famously decreed that “sunny ways” and positive politics were the keys to his success. Cut to six years and two elections later, and Justin Trudeau—now a grizzled veteran who’s barely survived multiple scandals and lost the popular vote in two straight elections—walks alone with his wife on a grey and drizzly autumn morning, introducing a socially distanced cabinet after shuffling numerous high-profile ministers out from damaged portfolios. Gone are the sunny ways, after Trudeau aggressively attacked Erin O’Toole to eke out a minority victory just weeks ago; gone is the proclamation that “We’re back” on the world stage, after stalemates with the U.S., fiascos in India and three years of agonizing hostage diplomacy with China; gone are the promises of “real change” after the pandemic really changed everything without Trudeau’s help. Multiple clouds are hovering over the PM’s latest cabinet. He and his ministers are facing lofty expectations to define themselves and justify their victories. No doubt, more storms are coming. At least the PM brought an umbrella.