Stephen Maher: It is one of the worst human rights abusers in the world, ruled by a hothead. Canada should stop selling it weapons. 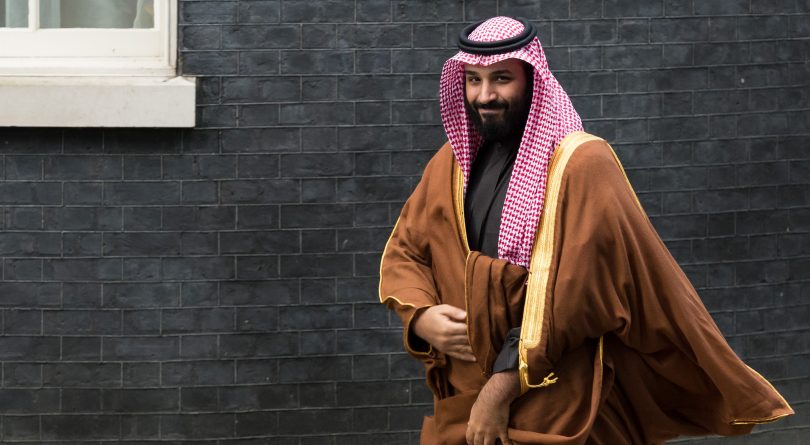 Saudi Crown Prince Mohammad bin Salman visits 10 Downing Street in London as the Saudi royal makes his first official visit to Britain. The Saudi delegation meets with Prime Minister Theresa May and senior ministers to discuss UK-Saudi partnership, which aims to encourage economic reforms in Saudi Arabia and cooperation in areas of education and culture, as well as defense and security. March 07, 2018 in London, England. (Wiktor Szymanowicz/Barcroft Media/Getty Images)

Mohammed bin Salman has cut quite a swath since he was appointed crown prince of Saudi Arabia last year at the age of 31.

Reckless MBS, the favourite son of 81-year-old King Salman, is not the kind of person who would ever get to run a democracy.

Since his father put him in charge, he has been acting impulsively and violently, destabilizing the region.

The first thing he did was consolidate his position by imprisoning many of his rival princes in the Riyadh Ritz-Carlton and, under threat of prosecution for corruption, shook them down for billions.

He followed up by kidnapping Lebanese Prime Minister Saad Hariri, who found himself locked up after flying to Saudi Arabia for a camping trip with the young prince. Hariri, looking terrified, read a resignation speech on camera, which he rescinded when he returned to Lebanon.

MBS’s thousands of rich royal cousins—the only constituency that matters in the theocratic monarchy—are supporting him because he is taking aggressive action to counter growing Iranian influence in the Middle East.

The Iranians took advantage of the chaos that followed the Iraq war to muscle into power positions in Iraq and Syria, threatening the interests of oil-rich Gulf states. When the Iranians moved to flank the Saudis by backing Shia Houthi militias in Yemen, on the kingdom’s doorstep, it was a step too far for the Saudis.

MBS won his spurs by leading the Saudis and other Gulf powers against the Houthis in a civil war that has led to a humanitarian disaster, killing thousands of civilians and displacing millions.

Human rights activists want the world to pressure the Saudis and Iran to stop the war, but the Americans—under both Barack Obama and Donald Trump—are part of the Saudi coalition. The United States, the United Kingdom and Canada all sell arms to them.

MBS’s temper tantrum this week gives Canada the excuse it needs to wash its hands of the carnage.

In 2014, Stephen Harper signed a $14-billion deal to manufacture armoured vehicles for the Saudis in a London, Ont., factory that had previously built vehicles for the Canadian military in Afghanistan.

The Liberals did their hypocritical best to keep the secretive deal quiet, but the arrangement seems to violate Canadian law, which is supposed to prevent us from selling weapons to countries that violate human rights.

Thanks to the methodical reporting of the Globe and Mail’s Steven Chase, and not our see-no-evil government, we have learned that the Saudis appear to be using Canadian weapons against Yemenis and their own Shia minority.

Canada is hardly alone in this. Since 1945, when MBS’s grandfather sealed a deal with Franklin D. Roosevelt on the deck of an American warship, the Saudis have been trading oil for weapons and greasing the palms of fixers, lobbyists and retired politicians of all stripes in western capitals.

The colossal volume of money involved helps explain why Western politicians and media organizations treat Saudi human rights violations differently from the nearly identical human rights violations committed by Iran, for example. Saudis may have been behind the September 11 attacks, but they can always be relied on to endow a presidential library, bankroll a foundation, endow a university research chair or fund a think tank. This is how K Street lobbyists pay for their houses on Martha’s Vineyard.

Obama angered the Saudis when he made a deal to normalize relations with Iran in exchange for controls over Iran’s nuclear weapons program. Trump, who makes money off the Saudis, ripped up that deal and has cozied up to MBS and announced $300 billion in new arms sales.

It was not surprising, then, that the United States did not have Canada’s back when MBS expelled our ambassador, ordered Saudi students home and suspended air travel.

MBS decided to go after Canada after our foreign affairs department sent a Tweet asking the Saudis to “immediately release” human rights activists the Saudis have locked up, including Raif Badawi, who was sentenced to 1,000 lashes for writing blog posts critical of the government. Badawi’s wife is a Canadian citizen who lives in Quebec along with the couple’s three children.

MBS is likely doing this because he’s a hothead, because the Americans can’t be bothered to keep him in check and because it acts as a useful nationalist distraction for the hotheads at home.

To that end, he launched a laughable anti-Canada social media campaign, the highlight of which was a semi-official Twitter account sending an image of a passenger plane headed for the CN Tower, threatening a terrorist attack on Toronto.

She needs to now take the obvious next step.

The Saudi government has one of the worst human rights records in the world. It oppresses women and minorities and exports religious extremism. It has beheaded 600 people since 2014, including some who lost their heads for political crimes, non-violent drug offences and sorcery.

We should never have started selling them armoured vehicles and should stop immediately.