It's time to talk about terror in Canada

Justin Trudeau vowed that a Liberal government would amend the Tories' Bill C-51. As terror attacks continue in Europe, are reforms still coming? 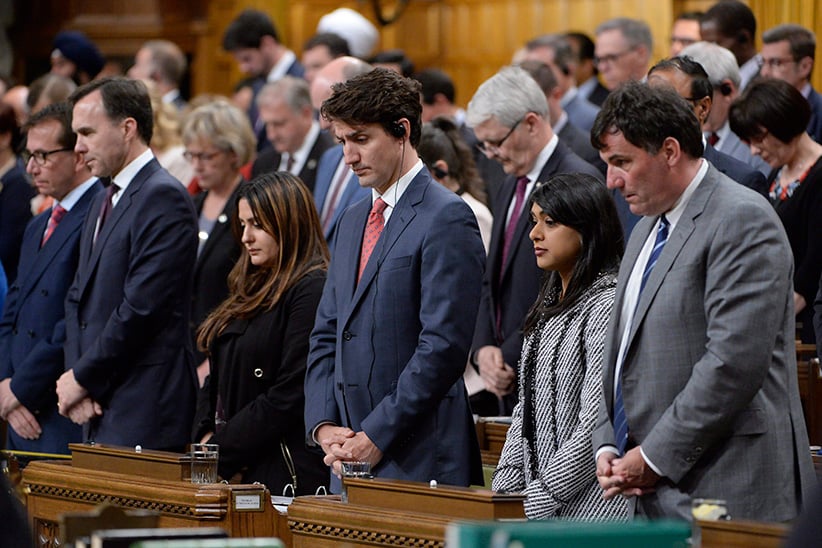 Prime Minister Justin Trudeau (centre) and Liberal MPs pause for a moment of silence for the victims of the London terror attacks during question period in the House of Commons on Parliament Hill in Ottawa on Monday, June 5, 2017. (Adrian Wyld/CP)

The recent horror in London is a sad reminder that it’s likely a question of when, not if, terrorism will revisit Canada. It might even be soon. With Mosul about to fall and Raqqa under threat, a squeezed Islamic State is desperate for attacks against the West; it’s also currently Ramadan, the Muslim holy month, and a time when ISIS encourages more jihadi strikes.

ISIS disciples in the United Kingdom have certainly delivered in spades: five dead in March’s “lone-wolf” attack at Westminster; twenty-two killed and scores injured in May’s suicide bombing in Manchester; and another seven dead (including a Canadian) and dozens wounded by three terrorists in the London Bridge attack.

The jihadis’ low-tech modus operandi in recent strikes demonstrates how hard it is to stop threats. Britain’s anti-terror forces are widely regarded as amongst the best in the world. There are anti-terror statutes galore on Britain’s books. If attacks can still happen in the U.K. despite these tools, they can happen anywhere, including Canada.

This country’s last conversation on security and anti-terror—held in the wake of 2014’s Parliament Hill attack—was rushed and incomplete. Bill C-51, the Anti-Terrorism Act, was introduced by the Harper government and granted wider surveillance and information sharing powers to Canada’s security services. It also amended the Criminal Code to include additional terrorism offences.

The bill was strongly opposed by the NDP and civil liberties groups. Reservations were also raised by the Liberals, who ultimately voted for the bill without amendment, promising to instead amend it once they formed government.

MORE: It’s getting harder to keep calm and carry on in London

But we’re now into month 20 of Liberal government without seeing any concrete action to rewrite the anti-terror bill. A consultation on the “national security framework” was launched by Public Safety Minister Ralph Goodale last year and its summary results released in mid-May. A majority of Canadians surveyed by the government want to see the bill repealed.

According to the report, the strongest reservations were expressed in response to the bill’s online data collection provisions, with most survey participants opting to “err on the side of protecting individual rights and freedoms rather than granting additional powers to national security agencies and law enforcement, even with enhanced transparency and independent oversight.”

This finding places the Liberals between a rock and a hard place. Radicalization now happens online, and quickly. Terrorists no longer skulk around cafes plotting mayhem; they use the internet. Can the government respect Canadians’ wishes for privacy without compromising their security?

The Liberals’ hesitancy to amend C-51 suggests the answer is “no.” And we’re left guessing because the Liberals won’t say whether the bill’s powers are actually helping to foil attacks.

The reticence to wade into the anti-terror minefield is understandable; Trudeau has been stung by past criticisms on the file. Following the Boston marathon bombing in April 2013, Trudeau was chided by then Prime Minister Stephen Harper for suggesting that “root causes” needed to be examined to better understand why terrorists kill innocent civilians indiscriminately. Harper went on to accuse the young opposition leader of “committing sociology” in the face of terror when a homegrown plot to target VIA Rail was foiled a few weeks later.

As Prime Minister, Trudeau appears to have learned Harper’s lesson. “Canada strongly condemns the senseless attack that took place,” Trudeau said in response to the recent London attacks, with nary a reference to the social sciences. But strong rhetoric is one thing—and strong action is another.

Will the Liberals now have the courage to lead a proper discussion on national security? Has the responsibility of being in government and protecting Canadians sensitized them to the need for some—if not all—of C-51’s provisions? Does more need to be done?

Trudeau should use some of his political capital to answer these questions. If more needs to be done to protect Canadians, a Liberal government would have a better chance of selling the changes to the public, since their motives are more trusted. If Canada needs C-51, then better just to admit it, weather the whingeing of civil rights groups, and be done with it. The opposition Conservatives wouldn’t complain.

If sociology remains a concern, we can learn from ISIS themselves who, handily enough, published their top six reasons for hating the West in their propaganda magazine Dabiq last year. Canada meets all of the criteria. In fact, the Iraq bombing, Roman Catholic feminist Justin Trudeau, and his gender-balanced cabinet fit ISIS’s hatred bill to a tee.

Canada isn’t looking for trouble, but there is no way to remove ourselves from ISIS’s crosshairs without changing our values as a society. Justin Trudeau should instead honour those values with a vigorous public debate about the protections Canadians need in this new age of terror.