Jagmeet Singh and the shunning of Parliament 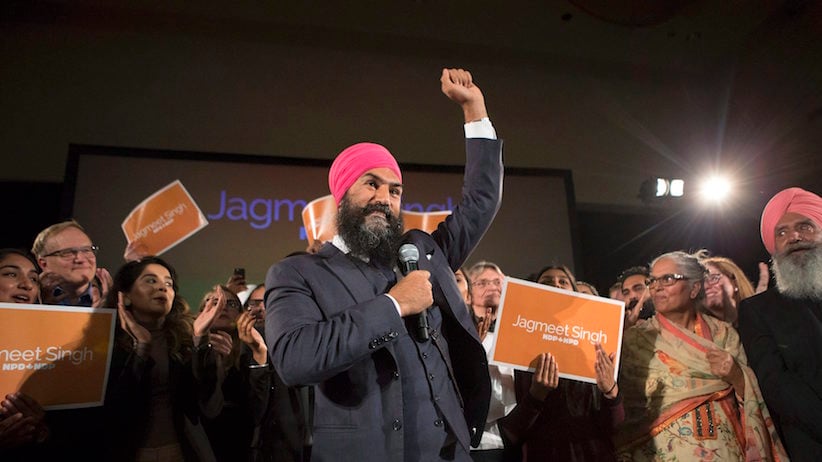 Jagmeet Singh celebrates with supporters after winning the first ballot in the NDP leadership race to be elected the leader of the federal New Democrats in Toronto on Sunday, Oct. 1, 2017. THE CANADIAN PRESS/Chris Young

If the Doomsday seers are right, this is the end times for some of the most important elements of our democracy. Newspapers, for example, have been hit by a digital meteor. The Shattered Mirror, a Public Policy Forum report on the future of news, reads like an archeologist’s treatise on an extinction event. “In 1950 there were more papers sold every day than the country has households…today, fewer than one in five households pays for newspapers.” But as worrisome as that may be to some, there’s a much more troubling concern: what if Parliament is next?

Is cutting the parliamentary cord the new reality in the digital world of selfies, Instagram and social media? Nothing highlights this fear more than the refusal of the new NDP leader, Jagmeet Singh, to run for a seat before the next election—two years from now. Two years without a seat? Two years without holding the Prime Minister to account in question period? Without personally working on key legislation like the legalization of pot, the budget, sending Canadian troops into harms way on a potential “peacekeeping” mission? There are four by-elections coming up, but Singh will not run in any of them, preferring to wait until 2019, when he will run in Brampton where he once held his provincial seat. You might think this would elicit gasps, but instead of criticism for the long delay, there’s actually been praise.

Political tactician Jamie Watt recently wrote a column in the Toronto Star lauding Singh’s decision to skip out of Parliament. “Jagmeet Singh does not need a seat in the House of Commons,” Watt argued. “There was a time when the Commons was both the symbolic and functional home of Canadian politics, but it matters less today than it ever has before.” Watt suggests that it is more effective to spend time touring the country, building the party and using social media to garner attention. Bypassing Parliament is, apparently, Democracy 2.0. Is Parliament really passé?

Don’t be so sure. Both strategically and philosophically, having a seat in Parliament is important and ought to stay that way. As a matter of strategy—which is what pundits usually focus on—Watt and others often point to the Mulcair Mistake as a warning for any leader. Winning in question period for Tom Mulcair proved useless in the general election, so don’t overvalue it. Only pundits inside the “Ottawa bubble” care about the cut and thrust of parliamentary debate, goes this kind of thinking, but voters don’t.

The truth is, however, that Mulcair’s brilliant performance in the House profoundly helped him politically. It is what led him to the frontrunner status early in the 2015 battle. The election was his to lose until his clumsy stump performance and play-it-safe policy book did him in. Parliament propelled Mulcair to national relevance; the campaign trail destroyed him. “I would agree,” Karl Bélanger, Mulcair’s former principal secretary, told me. “Mulcair earned a lot of kudos for his performance in the House and his name recognition shot right up during the Duffy-Wright affair. It helped create the conditions to make the NDP a real contender for government.”

If the Mulcair Mistake is invoked incorrectly, what about Jack Layton’s long period without a seat? Like Alexa McDonough, the leader he replaced, Layton spent 18 months outside of the House. Singh frequently invokes this as a justification for his decision not to run. See how successful he was? But again, the conclusion is misleading and frankly, shouldn’t offer any real comfort for the NDP. In his first election after he was elected, Layton only won 19 seats, five more than the previous election but still two less than the party won in 1997. “It took Layton seven full years after he first won—humping it both in the House and out—before he finished…second,” a senior Liberal told me. “So if Singh’s plan is to finish second in 2026…” He let that one hang in the air.

Bélanger agrees. “Layton struggled mightily after becoming Leader in 2003. Having more time to tour the country and build the party was good, but we had to be very creative to generate any kind of media attention anywhere in the country. In many cases, despite our efforts, media were a no-show.” So the Singh rationale is at best high risk, and at worst strategically incomprehensible.

What about Justin Trudeau? Again, this is a point frequently cited by the Singh camp. Trudeau also spent less time in the House as an MP before he won, letting Mulcair do the hard parliamentary slogging. But again, Trudeau was an MP. It’s foolhardy to underestimate the fact that Trudeau won a seat in Papineau, which was far from a sure thing. That campaign tested his mettle and showed he was ready to fight to win his own place in politics. The idea that he sacrificed parliamentary attendance to criss-cross the country to rebuild his party ignores the fact that he actually had a seat.

“There is a profound difference between choosing not to spend more time in the House and not being in the House because you aren’t a member,” says EKOS president Frank Graves. “I think it would be a strategic error to not run for a seat. Most voters would think that someone who is presenting him or herself as a potential PM should at least have the authority of being a sitting member of Parliament. Being an MP not only adds legitimacy and authority, it also provides important opportunities for the leader to show his leadership and debate skills in the House.”

I’ve asked Singh why he won’t run in one of the four upcoming by-elections, and he shrugged it off as a minor issue. He knows he has a much better chance to win the seat in Brampton in the next election, and he doesn’t want to risk losing now. But fundamentally the message is clear: he just doesn’t believe being in Parliament, asking questions and working on legislation, is important.

That’s a troubling sign for any democracy. Of course a seat in Parliament is no guarantee of broader electoral success, and while new media has forced politicians to develop new strategies to connect with Canadians, Parliament is still the heart of a democracy. Pierre Trudeau’s famous 1969 dictum is still relevant: “50 yards from Parliament Hill, [opposition MPs] are no longer honourable members—they are just nobodies.” Even with the tempest of digital media, very few Canadians know who Singh is right now. Why would he chuck the best place to make a name for himself?

Liberals are not unhappy that Singh is absent from the House, especially now as the opposition is busy scoring huge points on the back of the Morneau controversy over blind trusts and conflict of interest. “The party best served by an irrelevant Parliament would be the party in power,” Bélanger warns. In other words, while being an MP is not crucial for a leader—it doesn’t decide election results—it matters strategically.

Philosophically, there is, perhaps, a deeper concern. Does absence show fundamental contempt for Parliament? If Singh truly wants to restore confidence in democracy, if he wants to be the antidote to a corrosive political cynicism—and surely that is a pillar of the NDP offer to voters—then shouldn’t he prove it by joining the club he hopes to lead? “This is a fundamental error of strategy,” says Graves. “I’m not saying it is a fatal error, merely that it has way more downside than upside.”

After all, it was none other than Jack Layton who destroyed Michael Ignatieff in 2011 by raising his attendance record in the House. “You know, most Canadians, if they don’t show up for work, they don’t get a promotion,” Layton said, and Ignatieff’s political career was over. Don’t think that won’t be trotted out in 2019.