Jagmeet Singh on his path to the prime minister's office 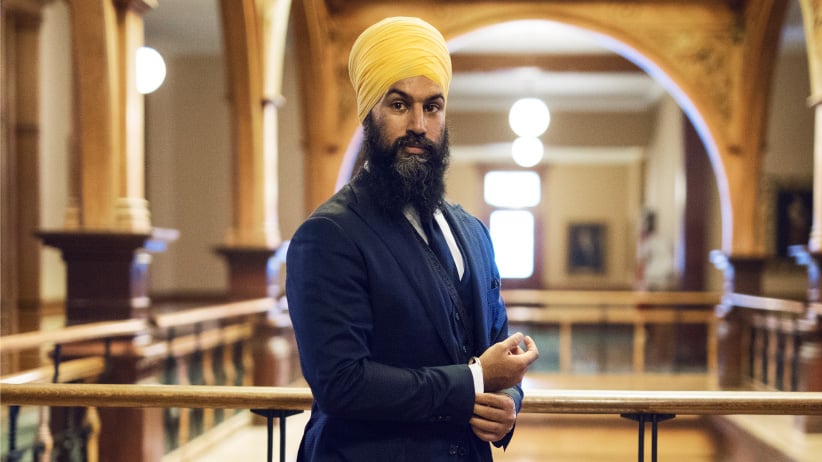 New NDP leader Jagmeet Singh has his sights firmly set on the next federal election, and his path to the prime minister’s office runs through, well, everywhere.

The Ontario MPP took the helm of the federal party after a first-ballot victory in the long-running leadership race last weekend. Although Singh hasn’t conclusively ruled out running in a byelection for a seat in the House of Commons—he’s said he’s open to advice on the matter—he has repeatedly suggested he plans to use the months before the 2019 contest to meet voters across the country.

The NDP currently has 44 MPs in the Commons, so the party will have to add a significant number to stand a chance of forming government at the federal level for the first time. Singh sees promise all across the country, particularly in the big cities. “We’re definitely going to pick up seats in Atlantic Canada again,” he said in an interview with Maclean’s this week. He also pointed to the NDP’s long history in the Prairie provinces, and hopes to win back seats in Quebec, specifically in Montreal. There has been considerable conjecture as to the party’s ability to garner support in Quebec with Singh as leader; it’s where he’s headed next, to Montreal as well as to campaign in the upcoming Lac-Saint-Jean by-election.

While the party’s history gives him hope of success in some areas, in others he is drawing on his own personal connections. “Lots of endorsements in B.C. [in the leadership race],” he says, pointing to the time he’s spent in downtown Vancouver as well as suburban areas.

The ring of ridings around Toronto has been an increasingly important electoral battleground in recent contests, with the current Liberal and previous Conservative majority both relying on sweeps of the region. Singh is targeting it, and the city core, as well. “Toronto is where I have incredibly strong roots,” he says. “That’s going to be an area of growth for us for sure.”

Singh was similarly optimistic about the Peel region in the 2015 election, campaigning for the federal party there and telling the National Post that the communities who had previously voted Conservative “are going to move away from the party.” They did—just to the Liberals, with the NDP not managing even a second place finish in any of the 10 ridings in Brampton and Mississauga. As to why that happened, “I [want] to say something cheeky like, ‘I wasn’t leader yet,‘ ” Singh jokes.

RELATED: How Jagmeet Singh hopes to win over the next generation of NDP voters

His real answer is that the NDP’s campaign failed to connect with voters. “More than anything, people respond to a message, a campaign, that evokes emotion [and] really speaks to the hearts of people,” he says. “That’s something that I do.” Just as important as policy—the list he has taken to repeating includes inequality, climate chance, reconciliation and electoral reform—is communicating it in a personal, inspiring way.

In his victory speech, Singh referenced the need to combat what he called “the growing politics of division.” These forces are separating communities that have a lot in common, he believes. “Most people are in a position where they’re working, they’re worrying about the future, they’re uncertain about their children’s future,” Singh says.

He sees the politics of division being practiced on the right, and cites Donald Trump as “probably the best example, or the worst example.” The U.S. president, Singh says, is pitting the working poor against each other even though their interests are aligned.

The NDP will have to run against Justin Trudeau’s Liberals and Andrew Scheer’s Conservatives in 2019. The former is practicing the “politics of niceties and good words,” Singh says, while the latter “is going to play into some of the more divisive politics.”

Singh also thinks the government’s controversial proposed changes to the small-business tax regime frame the issues in a divisive way, instead of advancing “progressive” and “fair” taxation. “[Trudeau is] not really going after folks that can truly make the investments that we need to make,” the NDP leader says, claiming that fixing the use of tax havens and CEO stock option “loopholes” would yield $8 billion, versus the estimated $250 million from the government’s controversial proposed changes to the small business tax regime. “He’s framed it in a kind of way to besmirch or attack entrepreneurs, farmers, and small businesses, and kind of muddied the waters around something incredibly important.”