Politics Insider for May 14: Singh goes for Green, the provincial carbon fight continues and Canada gets a Trump admin ally 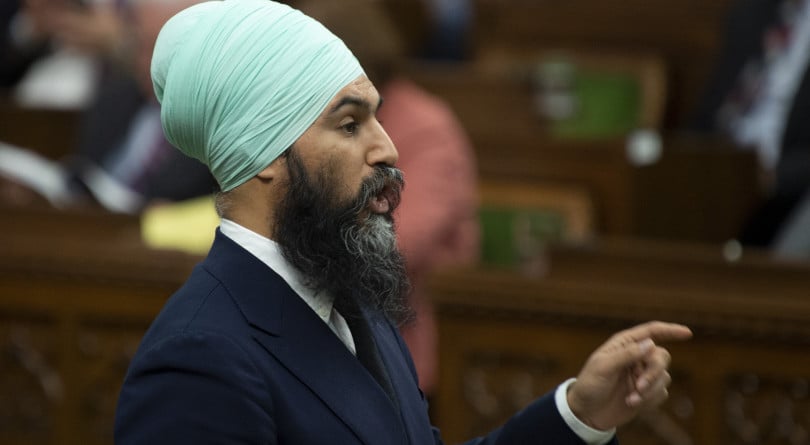 A splash of green: Perhaps it was his party’s dismal defeat in the last federal byelection in Nanaimo, B.C., where the Green Party came out on top. Or maybe it’s the constant drumbeat of polls showing support for the NDP slipping away, once again, to the Greens. Whichever the case, NDP Leader Jagmeet Singh is scrambling to assert his climate credentials. Singh called Prime Minister Justin Trudeau to declare a climate emergency and scrap the Trans Mountain pipeline expansion. (Huffington Post)

But Singh went further and partially reversed his support for B.C.’s $40-billion liquid natural gas project, a favourite project of the provincial NDP: “LNG involves fracking, fracking means more emissions. … I do not believe that fracking or fossil fuels (are) the future of our country.”

With Svends like these: At the same time Singh is facing challengers from within, namely Svend Robinson, the former NDP MP for Burnaby who is back in the running for his old seat. Sure, Robinson, who quit politics in 2004 after stealing an expensive ring, offered the obligatory praise for his potential boss—”I support him 100 per cent“—but then he slammed Singh’s leadership on environmental issues. “He’s got to step up … Our leadership has got to be a lot clearer.” (Vancouver Sun)

Carbon clash: Sticking with the climate for a moment, Ontario and Alberta continue in their own ways to fight the Trudeau government’s national carbon pricing plan. Alberta Premier Jason Kenney followed through on one of his key election promises and signed a death warrant for the former NDP government’s provincial carbon tax. The levy on carbon will expire on May 30, at which point Ottawa could enforce its own carbon tax plan and Alberta may launch a court challenge against it, however neither side is saying when those things might happen. (Canadian Press)

Over in Ontario, meanwhile, Premier Doug Ford rolled out his taxpayer-funded anti-carbon tax ad blitz. Price tag: up to $30 million. Though economist Mike Moffatt noticed that for anyone watching the ad with the sound off, the images of money pouring down on Canadians at the grocery store, in their homes and at the pumps means it “literally looks like an ad *promoting* the carbon rebate. You’ll be showered with money!” (CBC News, Twitter)

Marching orders: More details are emerging about Vice-Admiral Mark Norman‘s role in helping the former Harper government fast-track the purchase of a temporary supply ship for the navy, revelations that could explain the Crown’s decision to stay a breach-of-trust charge against Norman. The Harper cabinet authorized Norman to speak directly with Davie shipyard in Quebec in 2014 and 2015, part of the period when Norman was accused of leaking cabinet secrets. (CBC News)

We’ll take a tweet: Canada’s efforts to rally support from the U.S. for this country’s diplomatic battle with China are paying off, somewhat. A high-level ally to President Donald Trump, national security advisor John Bolton, tweeted “China is punishing Canada for upholding its treaty obligations and the rule-of-law. The U.S. stands with Canada in efforts to secure the release of its citizens unfairly detained in China.” Meanwhile former vice president Joe Biden also bemoaned the fact that Canada is caught up in Trump’s trade war with China. (Global News)

Coming soon to a courtroom near you: For the first time ever the Supreme Court of Canada is taking its show on the road to give more Canadians a chance to see the top court in action. Winnipeg is the first scheduled stop in late September, where it will hear two appeal cases and meet with the community. (CBC News)