As the 2019 federal campaign officially begins, the NDP leader faces the most pressure to perform—especially in the first leaders' debate on Thursday 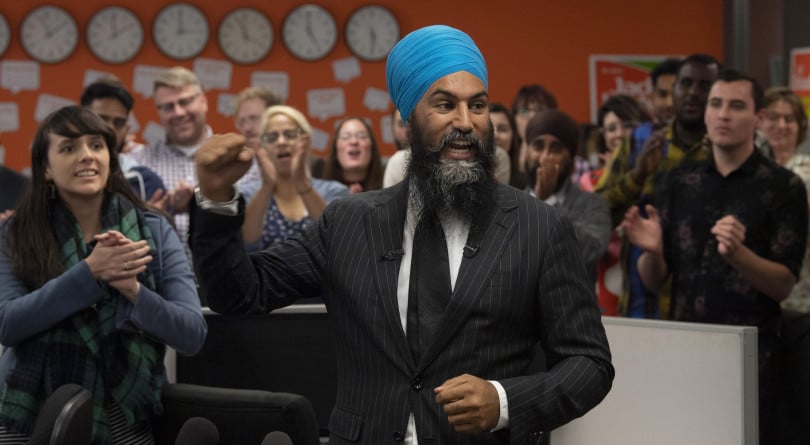 Every political party hopes for a fast, clean launch to any campaign, but NDP Leader Jagmeet Singh, arguably more than any of his federal rivals, needs to burst out of the starting blocks in exceptional form as the 2019 election race begins in earnest this week.

NDP strategists would naturally prefer to deflect this intense pressure for their guy to perform early in the campaign. They must look back enviously at the start of the 2015 campaign, when Kory Teneycke, then a spokesman for prime minister Stephen Harper, summed up Conservative opinion by remarking that if Justin Trudeau arrived for the campaign’s first debate “with his pants on, he will probably exceed expectations.”

Of course, Trudeau managed to show up fully clad and handled himself impressively. Polls didn’t register his strong showing in the campaign’s first set-piece event moving many voters, but suddenly he was being portrayed as more than credible in campaign commentary and coverage. Lesson learned: This time out, party operatives of all stripes are being careful not to hand their rivals the gift of snide remarks going in.

For Singh, though, the problem is not that expectations are high; it’s that his need for an early bounce is so undeniably urgent. Even the most upbeat recent opinion surveys show the NDP two or three points below the popular vote share of 19.7 per cent it scored under Thomas Mulcair in 2015, a result the party viewed as disappointing enough to justify dumping Mulcair as leader.

And those are the polls New Democrats hope are right. Polling analyst Philippe J. Fournier writes in his latest 338Canada update that the NDP is averaging a mere 13.5 per cent across all national polls, far behind the 35 per cent level of both the Liberals and Conservatives, and not so far ahead of the Elizabeth May’s Greens at 10.4 per cent.

Singh’s first real chance to turn things around will come in the National Leaders Debate that Maclean’s and Citytv are hosting Thursday (starting at 8 p.m. EDT; 5 p.m. PDT). Trudeau is not taking part, which obviously changes the strategic calculations for Singh, Andrew Scheer and Elizabeth May. “The opportunity for Singh and for May up against Scheer is that they can be seen as the progressive champions when Trudeau, they can argue, didn’t have the guts to do it,” says David Coletto, CEO of the Ottawa-based polling firm Abacus Data.

READ MORE: This week’s 338Canada projection: Is the NDP on the verge of collapse?

Coletto says Singh not only needs to win back votes that have drifted to the Liberals and Greens, he must solidify the NDP’s uneasy base of remaining support. “I do think there are a lot of voters out there, in our polling at least, who have parked their votes with the New Democrats only because they have, over the past few elections, federal and provincial, typically voted NDP,” he says. “But half of those telling us they would vote NDP today are also saying they might vote for another party, and that’s higher than for any other party.”

Royce Koop, head of University of Manitoba’s political studies department, says that while a solid debate performance might boost Singh’s standing among voters, the NDP leader has a different sort of problem when it comes to motivating his core activists and operatives, who tend to be disgruntled about the state of their party. “There’s this management role of a leader,” Koop says. “When you talk to New Democrats, there’s dissatisfaction with his performance that’s not just the polls. He hasn’t built the bridges with the party organization that he needed to.”

For stalwart New Democrats, that issue of their party’s ready-for-prime-time professionalism is a major concern. University of Saskatchewan political science professor David McGrane, a provincial NDP candidate, writes in his new book, The New NDP: Moderation, Modernization and Political Marketing, that the party transformed itself under the late Jack Layton’s leadership, and then under Mulcair, to being run by political professionals, a major shift from its former reliance on volunteers and activists. The fall 2019 campaign is now seen by many insiders as a test of how much the party has slipped back.

Still, this week Singh and his strategists must concentrate on his public face, not any underlying worries about the condition of the party. Koop doubts he has much chance of inflicting direct harm on Scheer in the Maclean’s/Citytv debate. In fact, he sees the Conservative leader in general as well-placed to hold his party’s vote. “They might have some candidate issues, but Scheer is not going to slip up and alienate the block of Conservatives who are going to vote for him. He’s a force for stability,” Koop says. “People have made fun of him as ‘Stephen Harper with a smile,’ but the appeal of Stephen Harper for this block of voters is pretty clear.”

That “force of stability” view of Scheer fits neatly with Coletto’s view that Scheer should be more than content to put in a low-key debate performance. The reason: an exciting campaign will boost voter turnout. Why is that bad for Conservatives? Coletto says most of the possible stay-at-home voters aren’t available to Scheer anyway. They tend to lean left, especially millennials who turned out for Trudeau in big numbers in 2015, and might be pondering May’s Green appeal this time out.

By contrast, Coletto says, right-leaning voters, especially the older demographic, can be counted on to vote even after a less-than-scintillating race. “They’re angry and they’re ready to go vote against Trudeau,” he says. So Scheer’s best hope is to subtly suppress the vote. “Not suppressing it in an overt, unethical way,” Coletto adds. “Suppressing it in the sense of getting people to say, ‘I’m not that excited about the options, but I’m not afraid of Andrew Scheer’.”

Singh was supposed to be all about excitement when the NDP chose him to replace Mulcair back in the fall of 2017. Just 38 when he won the leadership, he embodied the NDP’s aspirations to compete with Trudeau for that progressive-minded youth vote. As a Sikh from the Toronto suburbs, who now represents a suburban Vancouver riding, Singh was also expected to vault the NDP into competitiveness in must-win swaths of ridings around those two cities where the votes of immigrants and their Canadian-born children are key to victory.

Instead, he has struggled. Fournier’s analysis rates not a single riding anywhere in Canada “safe” for the NDP, as Trudeau officially starts the campaign on Wednesday. Shachi Kurl, executive director of the Angus Reid Institute, says Singh’s best chance to turn things around might be to focus on the NDP promise to dramatically expand universal health care, by adding prescription drugs, dental care, mental health services and more. Kurl says her polling shows that health costs rank high among the concerns of uncommitted voters. “So, yes that has the potential to be profoundly resonant,” she says, but also cautions, “Singh has got his work cut out for him.”