Politics Insider for Oct. 15: Advanced polls numbers up, the improving mood among Team Scheer and the Canadian coalition complex 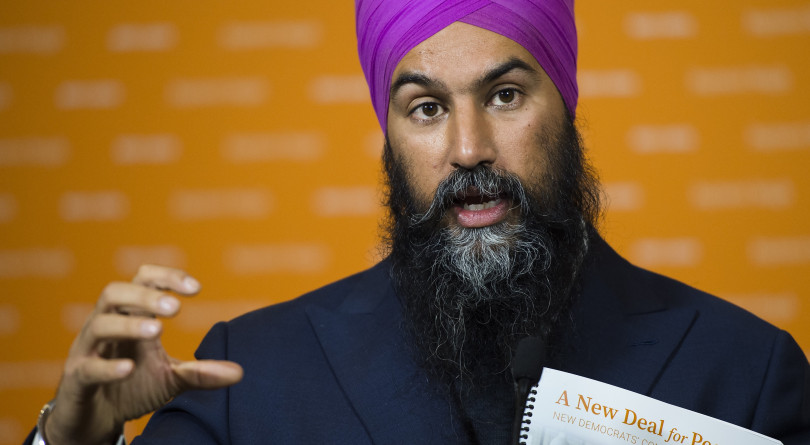 NDP leader Jagmeet Singh answers question from the media during a campaign stop in Ottawa on Friday, October 11, 2019. (Nathan Denette/CP)

Coalitioning like it’s 1917: Canadians have had plenty of experience with minority governments over the years, but coalition governments — in which politicians from more than one party hold cabinet positions — are something else entirely. The last and only successful coalition in Canadian history was led by Robert Borden in 1917, though in 2008 Liberal leader Stéphane Dion and NDP leader Jack Layton tried to form one before then prime minister Stephen Harper prorogued Parliament.

But coalition talk was thrust to the forefront of the 2019 election campaign over the weekend when NDP leader Jagmeet Singh said he’d “absolutely” form a coalition with other parties, including Justin Trudeau’s Liberals, to stop a Conservative government in the event the Conservatives win the most seats but fall short of a majority. Then just like that, Singh tried to walk it back on Monday saying, “my focus is not on a coalition. My focus is on this: If you vote New Democrat, you’re going to get someone on your side.”

Good luck putting the worms back in that can. The spectre of a coalition is likely to hang over the final week of the campaign, and the messaging from the leaders. Displaying his trademark dodge, Trudeau was asked 10 times by reporters what he thought of a Liberal-NDP coalition, and avoided directly answering the questions each time, instead repeating his warning that a vote for the NDP is a vote for Scheer. The Conservative leader, meanwhile, deployed his own rhetoric of fear about the prospect of endless deficits and higher taxes if his party doesn’t secure a majority.

Andrew Scheer’s good day: Last Friday as Scheer unveiled his full platform, and then after, as he attended a rally in Langley, B.C., there was a noticeable improvement in the mood among Team Scheer as the electoral landscape began to shift, writes Shannon Proudfoot, who followed the Conservative leader on his West coast jaunt:

In the technical briefing—a sort of embargoed tutorial that walks reporters through a complex document before it goes public—just before the announcement on the beach, party officials noted multiple times that there was not much new in the full platform that hadn’t already been announced with fanfare: it was just now all in one place. This emphasis seemed designed to forestall precisely the way the platform was received and framed in the hours and days after Scheer’s beach presser: as tens of billions of dollars in cuts, a twist ending.

The sore spot this could represent with a Canadian electorate is made clear by Scheer’s tendency to respond to any broad question about spending or priorities by repeating, like a doll with a pull-string on his back, that his government would increase health and social transfers to the provinces by three per cent a year, full stop.

But among friends at the rally in Langley later that night, with the national electoral sands finally shifting in a way that seems to offer new possibility to the Conservatives, Scheer has no need for a defensive crouch. (Read more.)

So many early birds: For an election that has been derided as being “about nothing” there sure were a lot of voters eager to cast their ballot early. Elections Canada says the number of advance votes is up 25 per cent over the same period in 2015.