Jagmeet Singh's moment to shine—and get a little angry

The NDP leader was at his most compelling when he was mad, and standing up for a cause. It helped him emerge from the first debate looking like the winner. 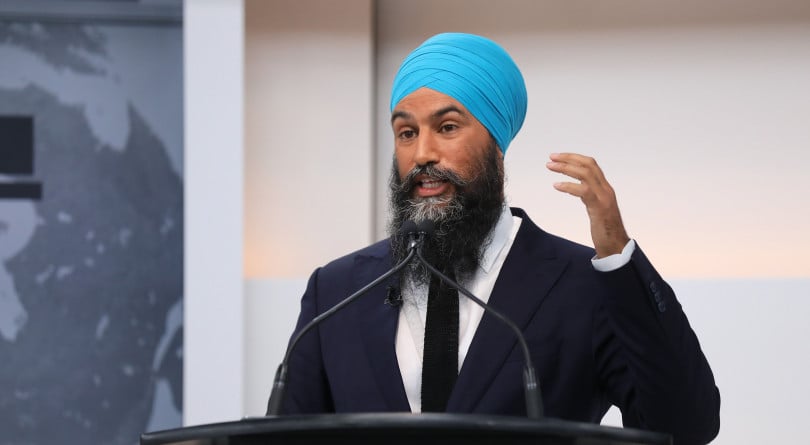 Singh went into the Maclean’s/Citytv National Leaders Debate on Thursday night with low expectations hovering around him, but he exceeded them all by a wide margin.

He’s struggled to find his feet on the national political stage since winning the NDP leadership in 2017, and even since the February by-election in Burnaby, B.C. that gave him a seat in the House of Commons at long last. His party’s fundraising has been anemic, two weeks before the federal election campaign kicked off they lacked confirmed candidates in nearly half the ridings across the country, and a narrative had taken hold that the party itself—and specifically its leader—was chum in the electoral waters.

But Singh emerged from the first debate of the campaign looking like the clear winner among the three party leaders on stage (Liberal Leader Justin Trudeau declined the debate invitation, and his absence was a constant, derisive presence in the hands of the other leaders). And Singh’s best debate moments arrived when he harnessed his frustration at things he perceived as unjust, rigged or just plain ridiculous.

When Singh speaks generally, he has a tendency to sound glib, his delivery a sort of monotone singsong that can badly undercut the sometimes compelling and genuine-seeming words coming out of his mouth. This occurred a couple of times in the earlier portion of the debate. Once, responding to a question from moderator Paul Wells about Bill 21, which bans Quebec provincial employees from positions of authority if they wear visible religious symbols, Singh—who as a practicing Sikh wears a turban—said the bill sends a message to kids that they don’t belong, and he recalled his own sense of alienation as a child. But what could have been a powerful and relevant moment for someone with deeply felt personal experience to speak on a heavily freighted issue instead sounded flat and rushed, almost bouncy.

It’s easy to imagine that sort of delivery is a product of nerves or inexperience on a bigger political stage, and that with a little more time, Singh will be able to fully stretch into those moments that should rightfully belong to him.

And indeed, as the debate wore on, that’s exactly what happened—and he was at his most compelling when he got a little mad.

In the debate segment on Indigenous issues, Wells asked Conservative leader Andrew Scheer whether he would appeal a recent ruling by the Canadian Human Rights Tribunal that awarded some $2-billion in damages to Indigenous children and their caregivers who had been inappropriately taken into the child welfare system. Scheer pawed around the edges of the question for a few moments, talking about making sure people who need resources get equal access.

But then Singh cut in. “I didn’t hear if you would accept the ruling or not,” he said, his voice archly impatient. “This is Indigenous kids that are not getting equal funding. The Human Rights Tribunal of Canada has ruled, and Mr. Trudeau certainly has not listened to rulings in the past,” he said, gesturing to the empty podium to his left. “Now, Mr. Scheer—it’s not surprising, but it is appalling that he hasn’t said that he would accept the ruling.”

Singh stared straight at the camera, and implicitly the viewers, through the rest of his remarks, his hands gesturing with measured exasperation to punctuate his sentences.

A New Democrat government would accept the ruling, he said, and “at a minimum, we shouldn’t be taking Indigenous kids to court.” And again, his voice dripped with irony and distaste at even having to spell this out.

A short time later, Wells questioned Green Party Leader Elizabeth May on an idea she had floated to have SNC-Lavalin construct First Nations water infrastructure as penance for the engineering firm’s ethical sins. May had already fumbled through a few explanations and alternative suggestions when Singh weighed in.

“I mean, it’s a bit ludicrous,” he said with a verbal shrug. “To suggest that we should be building public infrastructure through punishment of a multi-billion dollar corporation is a ludicrous idea.” As he walked through this, he was not smirking—that would have been off-puttingly snide—but rather grinning with what looked like genuine mirth at the ridiculousness of it all.

And then he arrived at his real point.

“No one would ever suggest that a city like Toronto, that if the water was not clean, that we would ask a corporation to clean it,” Singh said, then took the barest pause and nodded very slightly to the camera before continuing. “We would clean the water. I mean, people across this country deserve clean water, First Nations deserve clean water.”

There was another mode Singh snapped into multiple times during the debate, and it popped into view immediately followed this moment. May seemed flummoxed and insulted by his undressing of her suggestion, and attempted to explain herself again. “It was a bad idea, Ms. May,” Singh said, quietly and archly from across the debate stage. “You can just accept that it was a bad idea.”

Jagmeet Singh and Elizabeth May argue about a Green proposal to force SNC-Lavalin to clean water on First Nations across Canada #cdnpoli #elxn43 #firstdebate pic.twitter.com/nvEE5vfwGR

This kind of sotto voce Jim-on-The-Office-deadpanning-the-camera thing could slide into sneering territory, or could become an effective and amusing way for Singh to quickly yank a rug out from under his opponents when needed. It will be interesting to see how it evolves with him on the campaign trail and how voters respond.

There was another standout moment from Singh in the final minutes of the debate, which also illustrated a clumsy tendency that crept in and will hopefully get ironed out.

Scheer had gotten a question about his support for Brexit, and the exchange that resulted from that sprouted weird tendrils in all directions. After May talked about the Brexit vote as a manipulation of public opinion and took Scheer to task for using inflammatory language to describe asylum seekers in Canada, Singh stepped in to outline the broader tendency he believes underlies Scheer’s positions.

“What I’m concerned about, but not surprised about, Paul, is that when Mr. Scheer talked about being pro-Brexit, and he’s had some association with yellow vesters, it seems to be this idea of instilling fear in people,” he said. “Really, the fear isn’t in new Canadians arriving, there shouldn’t be any fear in using defamatory language towards people who are seeking asylum because they’re fearing persecution.”

That part felt strong and important, even as Scheer strenuously protested, but then Singh executed a move he repeated a few times throughout the night, which was to pivot abruptly to his core message that Ottawa has been operating too long to rig the rules to benefit the rich and powerful, rather than regular people who need and deserve a leg up. It’s a classic NDP message that seems tailor-made for this moment, in which the hard numbers on the economy march steadily uphill while large swaths of the population feel squeezed and fretful. But it’s not a message that fits every context and conversation, and it will be more effective—and feel more authentic—if Singh trots it out only as often as he can make it make sense.

The NDP slogan for this 2019 election campaign is, “In it for you.” The best version of that on display on Thursday night was an acerbically amused, righteously ticked off Jagmeet Singh going to bat for whoever he believed needed it.