Jagmeet Singh's quest to save the NDP in Quebec 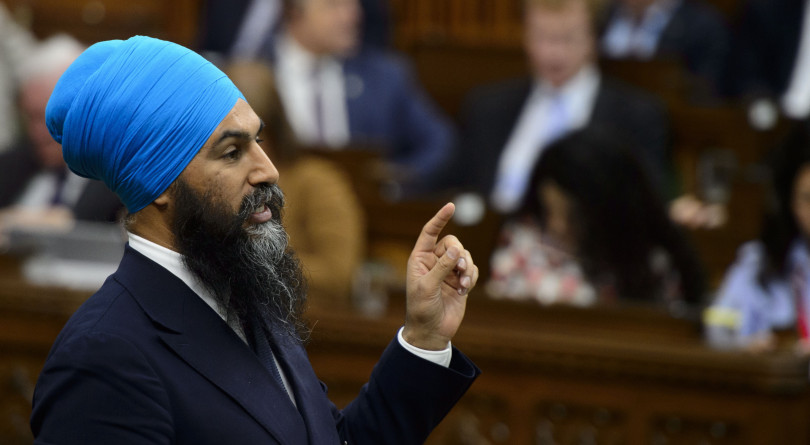 NDP Leader Jagmeet Singh stands during question period in the House of Commons on Parliament Hill in Ottawa on Wednesday, June 12, 2019. (Sean Kilpatrick/CP)

Under the influence: Never mind all the talk about cyber-meddling, the real threat to this election, writes Terry Glavin, is China. In the wake of former ambassador John McCallum‘s outrageous advice to China about how to re-elect a more China-friendly government, Glavin argues it’s time Canada look down under for guidance:

Ottawa’s recent initiatives against foreign interference in elections have been focused on Russian-style disinformation and cyber-meddling of the type that preceded the 2016 election of Donald Trump. But Canada’s predicament is more like Australia’s, and Australia’s recent Foreign Influence Transparency Scheme would be a better model.

Launched last December in response to Beijing’s accelerated subversion of Australian politics and a series of scandals involving several Beijing-compliant politicians, the Australian law requires individuals or companies politicking on behalf of a foreign power to register and set out their activities on a public website. (Maclean’s)

Ship contracts for you and you and you:  With less than 100 days before the election the Trudeau government announced $1 billion in ship maintenance contracts to be split between two shipyards, Davie in Quebec and the Seaspan Victoria Shipyards in British Columbia. A third deal is being finalized for Irving Shipyards in Halifax. “Each shipyard will have the opportunity to receive a minimum of $2 billion in maintenance contracts until the Halifax-class frigates (have) reached their end of the life cycle,” Public Services and Procurement Canada said in a statement to CTV News. “The exact amount each shipyard receives will depend on several factors such as ship condition and performance.” (CTV News)

The May way: As Parliament was winding down, Paul Wells spoke with Green Party leader Elizabeth May about oil dependency, her deep disappointment with successive governments on climate change—and how Canada can move to a zero-carbon economy:

Q: Part of your plan is to use only Canadian oil during a transition period, at the end of which we wouldn’t be using any oil. And for that great idea, you got chewed out by the leader of the Green Party in Quebec, who said we’re not going to be using more Alberta oil, thank you very much.

A: He didn’t actually look at the full document. What we’re proposing is that for Quebec, and for Atlantic Canada, we can reduce the number of tankers moving through Atlantic Canadian waters. This is not going to be overnight. You can’t wave a magic wand and undo a lot of commercial contracts. But [Newfoundland’s] Hibernia oil is over 80 per cent exported. That oil would suit.

And for Western Canada, there’s an existing infrastructure that meets the needs of a domestic market. But we’ve been so conditioned by everybody in politics and in Alberta saying we have to get our oil to market. Well, there’s a market, and it’s Canada. Of course, our plan is not music to their ears in Alberta because the Greens are talking about quite a dramatic reduction in our use of fossil fuels. But Alberta has the best potential of any province for solar energy. It has enormous potential for wind power. And so replacing coal in Alberta with wind and solar is totally doable, and good for their economy. In the meantime, over time, bitumen can become the feedstock for a petrochemical industry instead of burning it. (Maclean’s)

So much consultation: A victim of Montreal’s Ecole Polytechnique shooting who was appointed to a federal firearms advisory committee to consult with the government on new legislation quit the committee, saying there wasn’t much advising or consulting going on. In her resignation letter Nathalie Provost said the committee had no input into the recently passed firearm legislation Bill C-71, which she considers weak, and called the consultation process “obviously useless.” (Canadian Press)

Rescue attempt: After touring several Liberal-held ridings in Ontario last week, NDP leader Jagmeet Singh is making his way through Quebec doing the same there. As CBC polling analyst Éric Grenier notes, with the party polling in fifth place in the province, the NDP is at risk of being wiped out in Quebec:

The party might point out that things were looking equally bleak before its breakthrough in 2011, when it won 59 seats in the province. And the NDP was polling around 13 per cent three months before it captured 43 per cent of the Quebec vote in that federal election.

But every election is unique and the circumstances that contributed to that surge might not be on the table this time — particularly since Singh does not have the same links to Quebec that Jack Layton did.

Layton also benefited from the fact that no other national party at the time was being led by a Quebecer. That won’t be the case this time — and the debate over Quebec’s religious symbols law (which polls show is popular in the province) is unlikely to play in Singh’s favour. (CBC News)

Singh is having none of it, saying he’s “not concerned” about the party’s poor showing in Quebec polls: “I think there’s a lot of support out here. We get lots of love. We’ve got 14 MPs, so there’s lots of ground for us to work on. We’ve got a lot of great, specific candidates who have done work in their community.” (Canadian Press)

The cost of doing politics: Attention Canadian dairy famers, Conservative leader Andrew Scheer wants you to know he’s got your supply-managed backs. This morning he’ll be in Saskatoon to speak at the Dairy Farmers of Canada annual meeting. After that he’ll head to the Greater Saskatoon Chamber of Commerce to speak on his favourite subject of the moment — his promise to lower the cost of living… where presumably he won’t be talking about artificially high dairy prices in Canada courtesy of the supply management system. (Saskatoon StarPhoenix)

Mixed signals: A new poll by Angus Reid Institute found the Conservatives still enjoy an eight-point lead over the Trudeau Liberals. Among the findings: “Six-in-ten who intend to vote Conservative (63%) say they are absolutely certain they will support the party and not change their mind, nearly double the number of Liberal supporters who say this (33%)” (Angus Reid)

On the other hand a new poll from Nanos Research gives the Liberals the advantage, with the party leading the Conservatives 36 per cent to 30 per cent. Among the findings: “Nanos tracking has Trudeau as the preferred choice as PM at 32.9 per cent of Canadians followed by Scheer (23.1), Singh (8.9%), May (7.9%) and Bernier (2.2%). Twenty three per cent of Canadians were unsure whom they preferred.” (Nanos Research)