Jason Kenney to take his anti-Trudeau show on the road 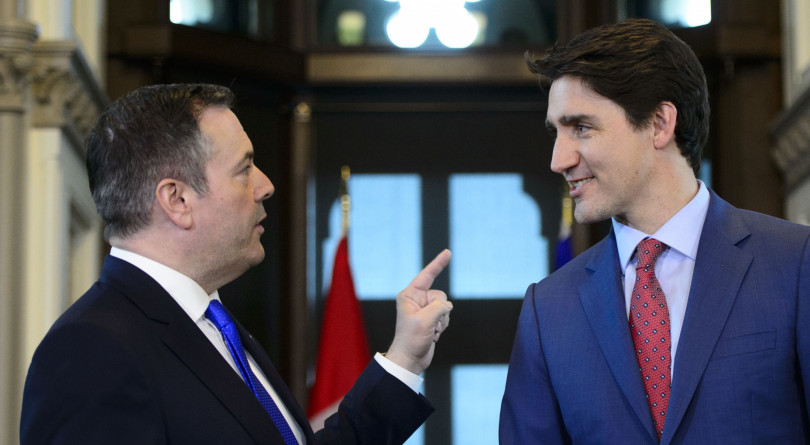 Prime Minister Justin Trudeau meets with Alberta Premier Jason Kenney in his office on Parliament Hill in Ottawa on May 2, 2019. (Sean Kilpatrick/CP)

Ship shape: It is no secret Canadian governments have a terrible track record when it comes to big procurement programs, so there was appropriate skepticism alongside joy at shipyards across the country when Prime Minister Justin Trudeau announced the government is commissioning 18 new vessels for the Canadian Coast Guard. Total bill (for now): $15.7 billion. “Canadians deserve better than having this fleet rust out, and dealing with this problem is long overdue,” he said in Vancouver. That city’s Seaspan Shipyards will build 16 multipurpose vessels while Irving in Halifax will construct two Arctic and offshore patrol ships. Trudeau also suggested some work will go to Quebec’s Davie Shipyards, but avoided directly answering questions about the timeline of the project, which has suffered many delays over the years. (Global News)

Independent you say?: The Trudeau government named eight news associations and groups that will decide how to dole out its $600-million media bailout package, including News Media Canada, the Association de la presse francophone, the Canadian Association of Journalists and Canada’s largest union representing journalists, Unifor. That last one went over with Conservatives about as well as you might expect—Unifor has been running a stop-Scheer campaign since last November. “If Trudeau is so worried about election interference, he can start by kicking Unifor off this panel,” Conservative leader Andrew Scheer tweeted. (Canadian Press, Twitter)

Is anyone actually complaining?: U.S. Vice President Mike Pence will head to Ottawa next week for talks aimed at speeding passage of the deal to replace NAFTA–you know, now that Canada is no longer considered a “national security” threat and the steel tariffs have been lifted. Pence’s trip has led to reflection on the lack of an official state visit from his boss, even though Trudeau extended an invitation to President Donald Trump shortly after Trump took office. (Trump’s disastrous G7 trip last year doesn’t count as a state visit, just a working visit.) While Trump is about to head off to the U.K. on an official state visit, no one in the PMO is likely upset at Trump’s snub to Canada. “It’s a gesture, but maybe the Canadian government is secretly relieved that Trump hasn’t accepted the (formal) offer yet,” said Roland Paris, associate professor of public and international affairs at the University of Ottawa. “I think any Canadian government might be afraid of what might come out of his mouth.” (Global News)

National insecurity: Pence will no doubt also want to talk about Canada joining its ban on China’s Huawei telecom technology. Mark Warner, the vice-chair of the U.S. Senate intelligence committee, tried to soften up the Trudeau government for that pitch earlier this week, acknowledging it’s awkward for America to ask one former-national security threat to ban another national security threat: “The hurt, angst and rightful indignation that that designation created was a real, real problem. But it still begs the question, I would argue, what is in Canada’s best interest. … Does the Canadian government, the Canadian public, want to have a system where their communications could be vulnerable on a regular basis to a foreign power?” (Globe and Mail)

Old stomping grounds: Back in the day as a member of the Harper government Jason Kenney spent much of his time reaching out to immigrant communities around Toronto to convince them the Conservatives best reflected their values. Now as the premier of Alberta he’s going to pick up where he left off. This fall he plans to campaign in Ontario against Trudeau’s re-election, targeting the vote-rich 905 area that surrounds Toronto. That is, assuming Scheer will have him. (Globe and Mail)

Trash talk: Speaking of national security threats, it looks like Canada’s war with the Philippines has been averted. Hours after Philippine President Rodrigo Duterte ordered up a ship to haul 69 containers of rotting Canadian waste back to Canada and dump it in Canadian waters, Environment Minister Catherine McKenna said Ottawa signed a contract with a shipping company to bring the garbage back to Canada. The trash, consisting of diapers, newspapers, electronics and water bottles, was shipped to Philippines in 2014 by a failed private company that claimed it was recyclable plastics. (Global News)

Monumental miss: Canada’s top soldier admitted the military flubbed the unveiling of a monument to Canadian soldiers and civilians killed during the war in Afghanistan. The memorial was kept a secret, no families of the dead were invited, and access remains limited. “We’ll turn this around,” Gen. Jonathan Vance told the Canadian Press from Brussels. “Where we want to get to is that anybody who wants to visit that memorial can visit.” (Canadian Press)

Questions were also raised Wednesday about Vance’s efforts to stamp out sexual assault in the military, after Statistics Canada released the results of a survey that found the number of military members who said they were sexually assaulted in 2018 had barely declined from 2016, despite Vance’s launch of Operation Honour in 2015, which took aim at abuse. (Globe and Mail)

Just a coincidence: This week it was reported Trudeau recommended giving Vance a raise that boosted his upper limit to $306,000, and that the announcement about the pay hike was posted online the day after federal prosecutors dropped charges against Vance’s former second-in-command, Vice-Admiral Mark Norman, who Vance suspended in 2017. While the opposition has accused Trudeau of politically interfering in Norman’s case, Vance came to Trudeau’s defence last week saying the decision to suspend Norman was made by “not the prime minister, not the (defence) minister, me. I own it.” Government sources stressed the raise was routine and that pay hikes for high-level bureaucrats routinely are made on the recommendation of the prime minister. (National Post)