Jean Charest, Jean Chrétien and other political throwbacks in the news

Politics Insider for Jan. 22: Tough questions for Volkswagen, Indigenous incarceration is at record highs and forget all about #Doughnutgate 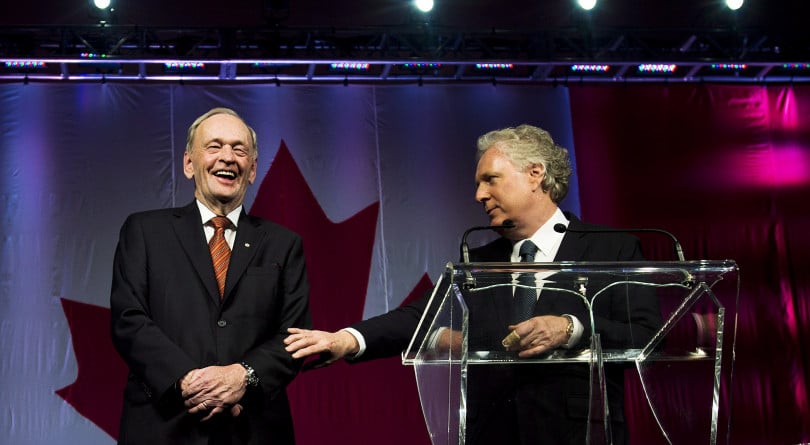 How did VW avoid criminal charges in Canada over its emissions cheating? Stephen Maher writes in Maclean’s that Volkswagen, which will plead guilty to illegally importing cars that were rigged to beat emissions tests, was never charged criminally, unlike in the U.S.—and there’s no evidence, he writes, that the Mounties even investigated the company.

Maher also raises questions about a meeting between a Volkswagen lobbyist and the prime minister’s office. He received varying descriptions of the meeting from Volkswagen, the PMO, and the former PMO official in the room, Mathieu Bouchard. Whatever happened behind closed doors, the automaker will likely pay the biggest environmental fine in Canadian history. But don’t celebrate just yet, writes Maher.

Before anyone pops any bubbly, there are a series of unpleasant questions that should be answered, ideally by officials testifying in parliamentary hearings, because otherwise we will likely never learn why Canadians are so much worse than the Americans at investigating and prosecuting this kind of terrible crime.

“Checkmate,” says Stephen Harper, presumably. Former Quebec premier Jean Charest told Radio-Canada he will not pursue the federal Tory leadership. Last week, Maclean’s reported Harper stepped down from the party’s fundraising arm so he’d be freed up to quash a potential Charest bid. Well, that was fast. (Charest’s statement said he wasn’t running because the contest rules don’t favour “external” candidates and the party has “undergone deep changes,” including on social issues, since he was a Progressive Conservative.)

Every so often, a prominent political player, reliably from decades past, will pipe up about how Canada should be dealing with China. More than a year ago, Paul Wells wrote presciently about that particular brand of advocacy. Eddie Goldenberg, once the right-hand man to former prime minister Jean Chrétien, made the rounds last week to urge a “prisoner exchange.” Canada would trade Meng Wanzhou for Michael Spavor and Michael Kovrig. At the end of his three-day cabinet retreat, Prime Minister Justin Trudeau firmly rejected the idea. On this, Wells sides with the PM.

I find myself wondering why logic that is so obvious to the Chrétien wing of the party is so unpersuasive to Justin Trudeau’s government. (I’m often nostalgic for Chrétien’s government these days, but on this case I disagree wholly with the Chrétien claque and hope Trudeau’s stubbornness endures.)

Best for last? Trudeau told reporters that ratifying the “new NAFTA” is a parliamentary priority for Liberals. The U.S. and Mexico have already signed on the dotted line, and the PM says Canada will follow suit in short order. Kudos to Trudeau for ditching the nomenclatural tussling over CUSMA/USMCA/ACEUM and reverting to terms everyone understands. There once was an old NAFTA. Now there’s a new one.

Trudeau also addressed another matter of grave importance that’s gripped the nation for weeks. Alas, he had no update on just who would end up paying for Prince Harry and Meghan Markle’s security costs when they live in Canada. British tabloids, which certainly think they know better, say the PM has already agreed to foot the bill. They say he “privately assured the Queen.” He says he hasn’t talked to her. The drama endures.

Only a day after the Public Health Agency of Canada’s reassurance that coronavirus would likely not appear in Canada, the United States confirmed its first case. And that patient is in the border state of Washington, no less. [New York Times]

Partying with plutocrats: Finance Minister Bill Morneau is in Davos, where the annual World Economic Forum confab is coalescing around a “manifesto” brimming with corporate bafflegab about social responsibility. Morneau joins a panel tomorrow on “shaping the global growth agenda.” The minister’s opposition back home will surely listen to his response to the panel’s central question: “What level of debt, inflation and interest rates are healthy for economies to grow?”

Lucky number 13: The Canada Border Services Agency says just 13 out of every 100,000 travellers into Canada have their digital devices examined by border agents. CBSA says 27,405 people had their phones, tablets or laptops looked at between Nov. 20, 2017 and Dec. 31, 2019—and 40 per cent of examinations led to customs-related offences. Of course, that means 16,443 examinations were fruitless. The agency admits Canada’s privacy commissioner found two breaches of privacy. (Earlier this month, the commissioner had a variety of complaints about the CBSA’s conduct.)