As the G7 meets in Quebec, one of Canada's most experienced political players offers a tour of challenges from trade friction and taxes to China's rise and climate change 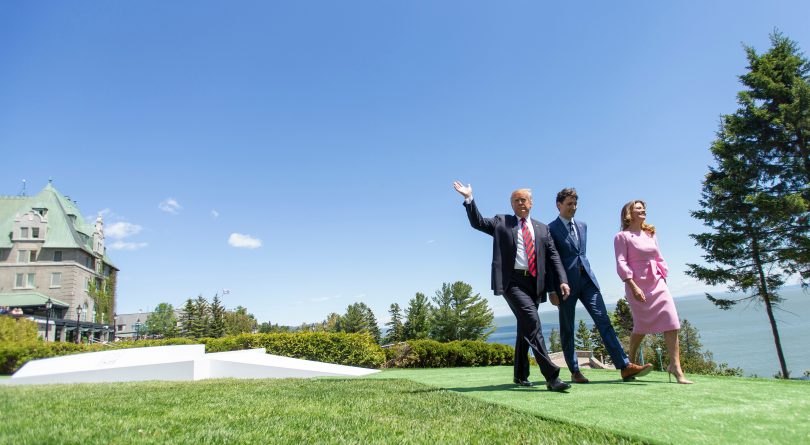 Most Canadians will have lost track of what’s happened to Jean Charest since he quit politics back in 2012, after his Liberals lost a Quebec election, bringing his nine-year run as premier to an end. By then, Charest was a national fixture. He’d been environment minister in then-prime minister Brian Mulroney’s government in the early 1990s, then leader of the humbled federal Tories through most of the rest of the decade—after the party was nearly wiped out under Kim Campbell’s leadership in the 1993 election—before jumping into Quebec politics as Liberal leader.

But Charest has hardly retreated to a rocking chair. He’s only 59, and offers strategic advice to the corporate clients of the law firm McCarthy Tetrault out of their Montréal office. He gets around. In recent days alone, he’s spoken to aluminum makers rocked by U.S. President Donald Trump’s tariffs, milk producers worried over what Prime Minister Justin Trudeau means about being “flexible” on agricultural policy, and economy-and-environment policy wonks talking pipelines and carbon pricing in Calgary. And that was all just after he got back from a recent Organization for Economic Cooperation and Development (OECD) meeting in Paris.

Q: Foreign Affairs Minister Chrystia Freeland has called this maybe the “most fraught moment since the end of the Second World War.” Do people in the business and political circles you move in feel that way?

A: I’ll start by saying yes. Basic tenets of our institutions are being called into question, essentially by the United States. That explains a good part of it, but not all of it. It’s also about the rise of China—the emergence of a superpower. And they are they are behaving as superpowers do, which is something interesting for Canadians. We’ve been used to living next to the world’s Number One superpower, and superpowers have certain behaviours.

A: One lesson Canadians have learned from dealing with the Americans is that on trade, when you do a deal with the United States, they reserve for themselves the right to interpret the rules. It’s called power. Softwood lumber is the recurring example of that. It’s not a question of good or bad faith; it’s just that if you’re the biggest player on the block, and you want something done, and you think that you’re right about something, you tend to steamroll things.

Q: Hard to deal with as a smaller country.

A: Canadians have been very adept at managing that. For example, if they do a buy-America initiative, we’ve usually been good enough to get into their political system, either through the White House or Congress, to avoid the negative consequences.

Q: That doesn’t seem to be working in the Donald Trump era.

A: That’s a big part of the frustration for Canadians. It’s not as if our relationship the United States was out of kilter—

Q: You mean on the balance of trade?

A: Yes. It’s not as though our relationship was out of balance either on trade or on other things. Our relationship is in balance. It makes it more difficult to understand why the American administration has this attitude. But Canadians know the difference between the U.S. political leadership and the country. Businesses, individuals, families—we’re so intertwined.

Q: Are you suggesting that we just need to be patient and outlast Trump’s impulses? Wait for the underlying healthy relationship to reassert itself?

A: Well, that’s what we all thought at the outset [of the Trump presidency]. But now some of the attitudes that Mr. Trump expresses seem so ingrained with him, much more than we had thought, that we’re starting to worry that it may be more profound than that.

A: It’s also the reaction of a country where citizens have had a rough experience in terms of the financial and economic crisis, where blue-collar jobs have been disappearing. I mean, the United States has now clocked in two consecutive years of seeing their life expectancy reduced. So this is a country where a segment of the population is suffering, and they’re lashing out. Trump has seized on that.

Q: What can Canada possibly do in response?

A: Canadians have to make a much bigger effort in understanding why it is that things are happening the way they are in the United States.

Q: I guess that would go for everybody in the world trying to grasp Trump’s America.

A: In the meantime, I’ve spent a lot of time in Europe, and Europe is in bad shape, too. Hungary and Poland are veering in a direction that is very authoritarian. Southern Europe is financially in a difficult situation, including Greece, Portugal, Spain, and also now Italy. And then you get Brexit for another layer of problems. The weakening of Germany. That leaves France and President Emmanuel Macron in the middle of it all. So Europe is going through a very tough patch.

Q: While you’re scanning the globe, what about Asia?

A: The story is dominated now by North Korea. But there’s also China’s “One Belt, One Road” initiative, which is a massive undertaking. And did you know the Chinese put out a paper last January about the polar Silk Road? Juxtapose Xi Jinping and Trump. In the case of Xi, there’s a plan and a vision. In the case of Trump, there are instincts but there is no plan.

Q: You’re sketching a world where we should be worried about new competitive pressures from China, populist worries and economic problems inside Europe. You might add other challenges, like climate change, an aging workforce, the rise of artificial intelligence and automation. But instead of focusing on all that, we’re fighting defensive battles to preserve advances we thought we’d already achieved and institutionalized, like liberalized trade within and between North America and Europe.

A: That brings me to a debate, a discussion, started early this month in Paris at the OECD meeting. Macron gave a speech there where he focused on the re-foundation of multilateralism. Look for that theme to emerge from the G7—not from Trump, but from the other six. They are going to ask the question: What is it that we need to do to modernize and re-found multilateralism? Macron said we should put together a working group at the World Trade Organization of the European Union, the United States, China and Japan.

Q: Beyond that push to update the multilateral trading order, what big themes do you think need attention?

A: On thing that should be of grave concern is that there is huge military spend going on in the world right now. That includes China, Japan, Russia, India, of course the United States, who continue to dominate on that. We are we are spending more money in the world now on military equipment and cybersecurity than ever before. And at one point, you know, someone may want to play with those toys.

Q: I’m curious about how you see the climate change file. You were so involved in it during your political career. As federal environment minister, you attended the watershed Rio de Janeiro Earth Summit in 1992. As premier of Quebec, you moved toward carbon pricing. But, with the Trump-led U.S. basically no longer participating in any world movement toward action on cutting greenhouse gas emissions, are you pessimistic?

A: One of the lessons I remember is from the old acid rain treaty, when Prime Minister Mulroney made it a very high priority. We understood we would only have effective policies when the Americans were on board. And the same is true on [greenhouse gas] emissions. I think the world will really see an effective strategy when the Americans are fully engaged on it.

Q: Do you still think that day is coming?

A: I always thought that like sulfur dioxide emissions, on carbon dioxide emissions, that would end up being the story in the U.S. Not now, not with this administration. But it’s important to step back and remember that there have been successes. The Montreal Protocol [on ozone-depleting substances] has been very successful.

Q: While we wait for something to change in the U.S., should Canada press ahead with a national price on carbon? Do you think the basic thrust of the Trudeau government’s Pan-Canadian Framework on Clean Growth and Climate Change is the way to go?

A: It requires more effort. We are a very, very decentralized country, and the provinces control natural resources. Dealing with the provinces on this issue is not optional. In other words, the federal government can only implement a national policy if they get buy-in from the provinces, and I think they will have to continue to work hard to get some buy-in.

Q: What would you say to any business leaders who might be hoping that Premier Doug Ford in Ontario, possibly joined next year by Jason Kenney in Alberta, will ultimately stall carbon pricing so they won’t have to worry about it?

A: I actually think the business community in general has looked at it the right way, and they’ve been brought around, most of them, to the argument that this is going to be happening in the world, and that Canada should not try to be in denial about it. But business is saying circumstances have changed, and if you are going to design a carbon tax policy, it needs to be designed with these changes in mind.

Q: By change, do you mean that Trump has cut corporate taxes in the U.S.? Does that make it more important for a carbon tax on this side of the border to be revenue-neutral, offset by tax cuts elsewhere?

A: Right. They need certainty that they’re not going to be putting a competitive disadvantage. The idea of a carbon tax is to influence consumption, not to cripple, you know, an industry. But you know where the opportunity for Canada could be? The International Monetary Fund, in a recent report, points out that one of the challenges in Canada is tax reform in the U.S. The IMF is much more affirmative than the federal government is on that. So there may be an opportunity here for us to do a major rethink of our tax architecture, including a carbon tax.

(This interview has been edited for clarity and length.)