Maclean's archives: As Jim Flaherty exits politics, he leaves a significant dilemma for his party 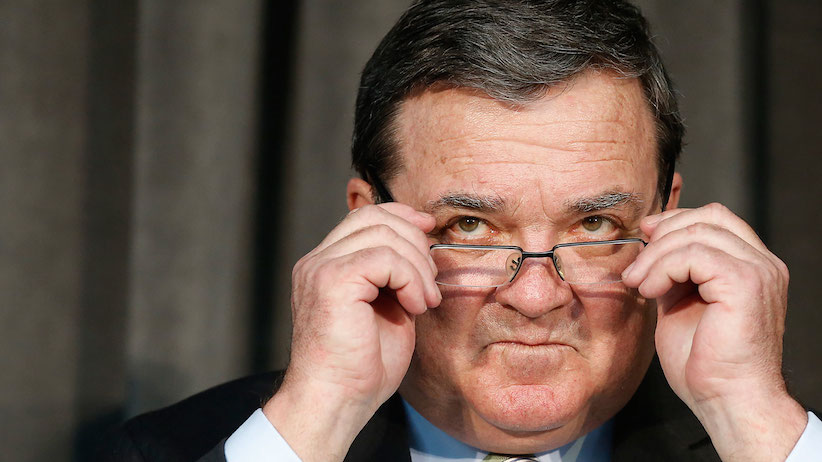 Former finance minister Jim Flaherty died Thursday at the age of 64. The following story, published after his resignation as finance minister last month, reflected on the dilemma his departure left for the Conservative Party:

By the time he resigned as finance minister this week—after long years spent battling first an economic crisis and then a serious skin disease—it was hard to remember what a jaunty figure Jim Flaherty once cut on Parliament Hill. But back when he delivered his first federal budget in 2006, Flaherty seemed an almost clichéd feisty, smiling Irish pol. That year’s fiscal plan, he crowed in his inaugural budget speech, was all about “tax relief people can see,” which mostly meant the first of two popular one-point cuts he made to the Goods and Service Tax. Flaherty had room to sacrifice billions in GST revenues: The Liberals had left the new Conservative government a huge surplus to work with, enough to pay for the tax trims that would help pave Stephen Harper’s path from minority to majority.

Flaherty was one of few constant ingredients in Harper’s always-changing recipe for winning and holding power. He was the only one of Harper’s ministers to stay in the same cabinet post from 2006 to this year. Yet it would be a mistake to imagine that the Ontario MP’s extraordinarily long run at Finance meant a consistent approach. Instead, the Flaherty era must be broken into at least three phases: the 2006-08 honeymoon, then the 2009-11 fight to minimize a recession and recover from it, and finally the 2012-14 climb back to within reach of a balanced budget. The upshot, says Craig Wright, Royal Bank of Canada’s chief economist, is that Flaherty’s successor will have the luxury of an estimated $45 billion in surpluses to allocate to new spending, tax cuts or debt repayment over the next five years. “By most measures, he’s leaving a good legacy,” Wright says.

But Flaherty acquired serious detractors, too. Scott Clark, a former deputy minister of finance and a tenacious critic of the Harper government’s economic policy, says Flaherty’s early GST cuts foolishly turned the sound fiscal situation he inherited into a precarious one. “I can’t believe he doesn’t regret it at night,” Clark says. It left Ottawa in a weakened position when world financial markets melted down in late 2008. Flaherty and Harper had downplayed the growing risk of a severe downturn all through that fall’s election campaign, and even in the controversial fiscal update Flaherty delivered soon after they won the vote. By early 2009, though, they had no choice but to sign on to massive, internationally coordinated stimulative spending, orchestrated by the G20 club of developed countries.

Jim Flaherty: a light goes out on Parliament Hill

Jim Flaherty: A life in photos

Flaherty’s management of the rollout of unprecedented stimulus spending in 2009 and 2010—largely on infrastructure projects— must underpin his claim to having been an historically decisive finance minister. Clark doesn’t see why he should get much credit for the program that undoubtedly eased the recession’s impact. “It’s unclear to me what he did other than say, ‘We’re going to provide some temporary stimulus,’ ” he says. “And then the bureaucracy did what it’s supposed to do.” But Ted Menzies, a former Conservative MP who worked closely with Flaherty from 2007 to 2013, first as his parliamentary secretary and later as minister of state for finance, says outsiders underestimate an epic behind-the-scenes struggle. “A lot of Conservatives were saying, ‘What are you doing spending taxpayers’ money like this, just because it’s a recession?’ ” Menzies says. “Jim Flaherty recognized what we needed to do, so we wouldn’t see massive job losses. As fiscally conservative as he was, he could see that and make those tough, tough decisions.”

If reacting to the recession was his defining test, it was hardly the end of his worries. Douglas Porter, BMO Capital Markets’ chief economist, says when Flaherty met with private sector economists, he was often preoccupied with the danger of a housing bubble emerging. “He was hawkish on the housing market, particularly the Toronto condo market,” Porter says, pointing to how Flaherty tightened rules on government-insured mortgages no less than four times. In Wright’s opinion, Flaherty’s interventions seem to have succeeded, since housing prices are now showing signs of “cooling down rather than collapsing.”

Over the past year or so, however, even victories didn’t seem to energize him. In early 2013, Flaherty revealed that he was fighting a rare skin disease, bullous pemphigoid, that doctors were treating with steroids. He often appeared bloated. Although he said the illness wasn’t hampering his ability to do his job, Flaherty, 64, sometimes looked in pain when he was getting out of his car or climbing stairs. Last December, he was unable to chair a meeting with provincial finance ministers held at the government’s Meech Lake retreat. He attended the sessions but reportedly sat for long stretches with his eyes closed, able to speak only with effort near the end. “Health problems challenged him, but never once, as much time as I spent with him, never once did the man complain,” Menzies says. “He just worked, bulled his way through it—typical Irishman.”

While that work was focused over the past few years on controlling spending to balance the books, Flaherty also put his stamp on the question of what to do when surpluses reappear—and what to not to. He shocked fellow Conservatives last month by voicing blunt skepticism about the Prime Minister’s pledge to introduce so-called income splitting. In the 2011 election campaign, Harper said that as soon as the federal books were back in the black, he would let couples with children under the age of 18 split their income for tax purposes. The higher-earning parent could allocate some income to the lower-earning one, cutting their combined tax bill. The tax break would cost Ottawa an estimated $2.5 billion, and Flaherty doubted its wisdom, largely because studies show it would benefit mostly well-off families. “It benefits some parts of the Canadian population a lot,” he said. “And other parts of the Canadian population virtually not at all.”

His unprecedented public criticism of a major Tory policy commitment set off a storm of debate. Even his critics gave him credit. “It took a lot of courage,” says Clark. “I’m beginning to wonder if he’s really a progressive at heart.” Although Harper initially seemed unwilling to spar with Flaherty in public, he later reasserted his belief that income splitting would be a good move. Key cabinet figures, notably Employment Minister Jason Kenney, also publicly defended the policy. Still, Flaherty’s frank comments are bound to be raised by opposition parties if ever the government moves ahead with the policy, and so he’s left a significant political dilemma for his party.

Other unfinished business awaits Joe Oliver, the former investment banker who moved from Natural Resources to Finance. For instance, Flaherty had championed replacing the hodgepodge of provincial stock market regulators with a national body. After the Supreme Court of Canada dealt that project a severe blow in 2011, by ruling that Flaherty’s plan overstepped federal jurisdiction, he pressed ahead anyway, and surprised many by announcing a deal with Ontario and British Columbia to form the nucleus of a co-operative Canadian regulator by 2015. To move the file that far took patient, shrewd, unyielding efforts against entrenched provincial opposition. It was the sort of challenge that showed Flaherty, for all the debate about the final verdict on his tenure at Finance, at his tenacious best.