Jody Wilson-Raybould has the lead over Trudeau's Liberals

An exclusive 338Canada/Mainstreet poll puts the Independent narrowly ahead of the Liberals in her riding, with a shot at re-election 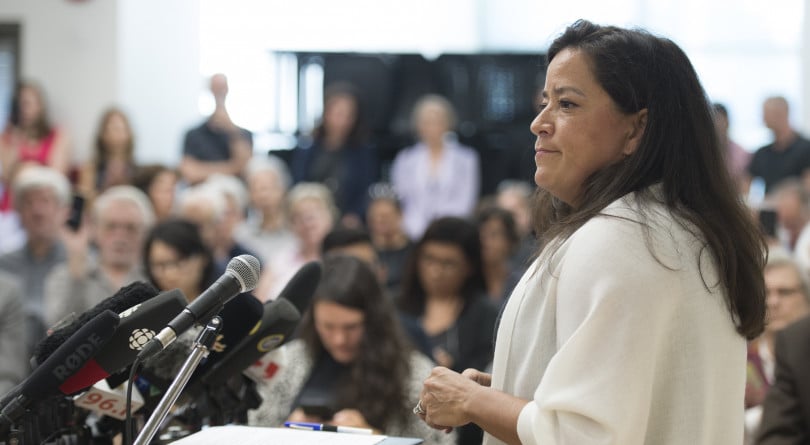 Wilson-Raybould announces that she will run as an Independent in the fall election during a news conference in Vancouver on May 27, 2019. (THE CANADIAN PRESS/Jonathan Hayward)

Last Monday, Jody Wilson-Raybould held a press conference in her home district of Vancouver Granville to announce she will be running as an Independent candidate in the next general election this fall. There had been speculation, including an invitation from Elizabeth May herself, that she could join the Green Party of Canada (along with Jane Philpott).

Instead, one could say Wilson-Raybould chose the harder path.

Wilson-Raybould won her district of Vancouver Granville handily in 2015, defeating the NDP and Conservative candidates by a significant 17 point margin. Polls of voting intentions of British Columbians have shown important fluctuations over the past months, creating a fair share of uncertainty in the data. Wilson-Raybould’s decision to run as an Independent makes Vancouver Granville an even bigger enigma for electoral projections like those presented on 338Canada.com.

But a new poll conducted by Mainstreet Research and commissioned by 338Canada shows the Independent Wilson-Raybould with a narrow lead over Justin Trudeau’s Liberals among voters in her district.

The Mainstreet poll was conducted on May 29 and May 30 and, using IVR technology, it collected voting intentions of 418 voters residing in the Vancouver Granville district. This is a probabilistic sample with a margin of error of ±5 per cent, 19 times out of 20. The poll’s full report is available here.

Respondents were polled on their voting intentions first by party preferences, and then again from a list of potential candidates. Even though we do not yet know all the main parties’ candidates for the general election next fall, this poll should be interpreted as a tool to give us a baseline of Wilson-Raybould’s support as an Independent candidate.

To the first question: “If the federal election were held today, which party would you vote for?” Respondents were given the following options:

Here are the results with undecideds: 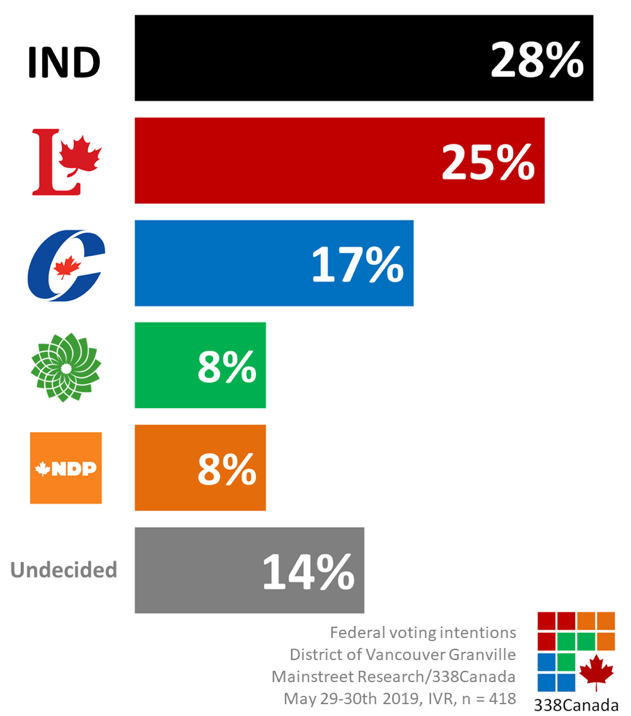 Independent candidate Jody Wilson-Raybould leads the pack with the support of 28 per cent of respondents, three points ahead of the Liberals. Considering the poll’s margin of error, we should interpret this result as a statistical tie between JWR and the Liberals.

The Conservatives came in third place with 17 per cent. The NDP and Greens were tied for fourth place with 8 per cent. Finally, 14 per cent of respondents were undecided.

This result shows that both the Liberal and Wilson-Raybould’s brands are benefiting from the NDP’s near complete collapse (the NDP candidate had placed second with 26 per cent of the district’s popular vote back in 2015). And even though Wilson-Raybould still receives an important share of support, voters of Vancouver Granville are clearly not unanimously behind her, as an unnamed Liberal candidate received a nearly similar amount of support in this poll. Consequently, this near perfect split of support between Wilson-Raybould and the Liberals could potentially create an opportunity for another party to win the district (most likely the Conservatives in this case). 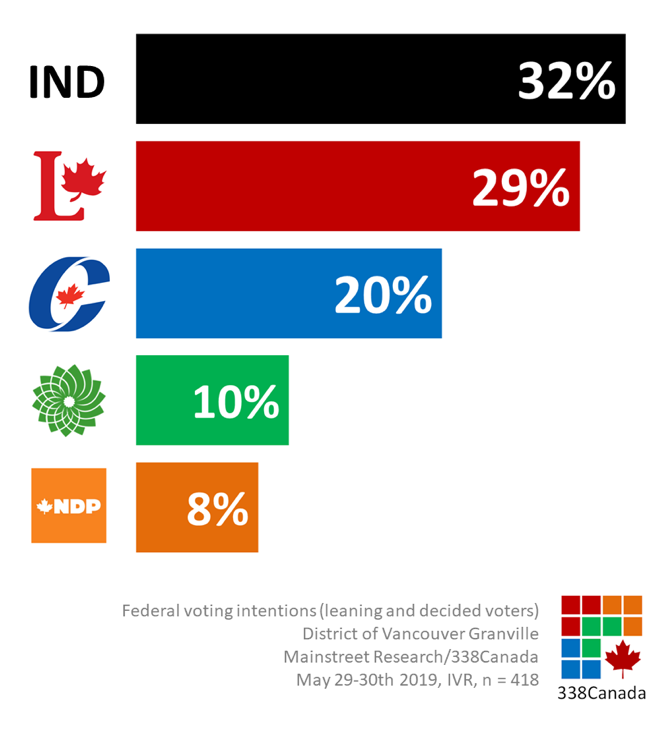 It is also interesting to note that every party receives its share of undecideds, with the notable exception of the NDP—which remains at 8 per cent overall.

Obviously, considering the limited sample of this poll, one has to use great caution with numbers from sub-samples. Nevertheless, it is rather striking to note that Wilson-Raybould polls 12 points higher among women than among men (38 per cent to 26 per cent). Among women respondents, Wilson-Raybould leads the Liberals by 9 points; among males, the Liberals lead by 4 points.

The poll then asked respondents their voting intentions among a list of potential candidates. The options were: 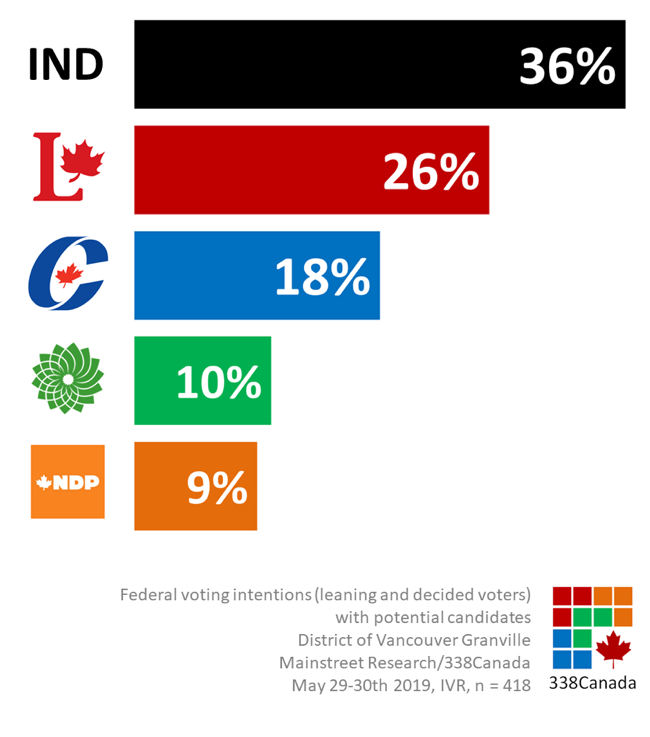 We notice also that both Liberal and Conservative candidates polled lower than their party brands did, whereas Green and NDP candidates did not significantly move the needle either way.

Nevertheless, what these new numbers suggest above all is that Wilson-Raybould could win as an Independent candidate. Additionally, the splintering of the vote in Vancouver Granville opens up the possibility of a candidate winning with only about a third of the popular vote. This fact alone significantly increases the odds of Wilson-Raybould’s re-election.

However, it must be noted that Independent candidates do not hold a stellar record in general elections in Canada in the past decades. As it was pointed out by Éric Grenier of the CBC, only four MPs have successfully been re-elected as Independent candidates since 1974. Neither Wilson-Raybould nor Jane Philpott will benefit from the Liberal get-out-the-vote machine which had certainly helped them in 2015, and are most likely to receive little media coverage during the campaign.

Will Wilson-Raybould’s name recognition and personal brand be enough to convince voters to opt for a candidate who has virtually no shot at being part of government? Considering how close the latest national seat projections currently stand and the real possibility of a minority government after the Oct. 21 vote, it certainly will be interesting to revisit this district a few times during the fall campaign.