Jody Wilson-Raybould on her exit as justice minister 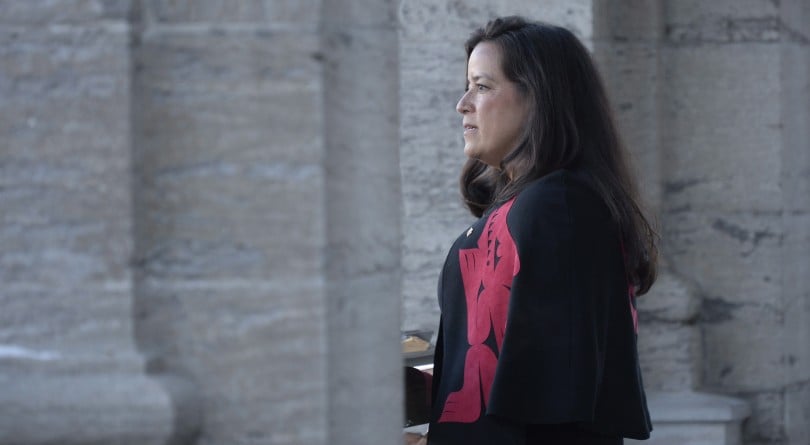 Right after an unexpectedly eventful cabinet shuffle on Monday morning, the newly sworn-in Minister of Veterans Affairs, Jody Wilson-Raybould—who was replaced as justice minister and attorney general by David Lametti—spoke to reporters about her new post.

Prime Minister Justin Trudeau and members of his newly tweaked cabinet took questions outside Rideau Hall on a January day so frigid that when new Minister of Indigenous Services Seamus O’Regan tried to take a sip of water during his own remarks, he discovered he was holding a tumbler of ice.

READ MORE: Trudeau on the cabinet shuffle, including today’s big move up—and down

Wilson-Raybould’s new portfolio is widely perceived as a demotion, based not on the value of the group she will serve, but on the fact that finance, foreign affairs and justice are traditionally seen as the most prominent and weighty cabinet profiles. The questions from reporters revolved around that interpretation—one she dismissed in the same manner the prime minister had a few minutes earlier.

Wilson-Raybould at first grasped her way through her comments, before picking up steam as she defended her work and results in the justice department. Below are some highlights of her remarks.

On whether she was disappointed with the results of the cabinet shuffle:

“No. And I would say that I can think of no world in which I would consider working for our veterans in Canada as a demotion.”

On whether she would have done anything differently as justice minister, given rumoured performance issues:

“Well, I can’t imagine where you’ve been hearing that. But in terms of the three-plus years I spent as the minister of justice and the attorney-general of Canada, I am incredibly proud of the work that I did, supported by an amazing minister’s staff, and by dedicated and hardworking public servants. We accomplished essentially my mandate letter, plus.

I was very proud to introduce 13 pieces of legislation, ranging from complex issues of medical assistance in dying to cannabis to impaired driving, to incredibly broad and bold reforms to the criminal justice system and family law, the latter two currently in the Senate…

In addition to the legislative agenda—which was entirely robust, as I said—we have accomplished amazing things in renovating and renewing an open and transparent judicial appointments process. I had the pleasure to appoint 250 judges to the superior courts—extraordinarily meritorious and diverse judges—and had the pleasure to appoint more judges than any justice minister in the past two decades…

So to close, I am incredibly proud of the work that I’ve been able to do. We’ve been very successful in advancing justice in this country and I look forward to bringing the hard work—the only kind of work I know how to do—and my strong commitment to serving the veterans of this country.”

On what personal qualities she brings to her new portfolio and her message to veterans, given that she has been a rare participant in the scrums that routinely occur near the stairs in the foyer of the House of Commons: